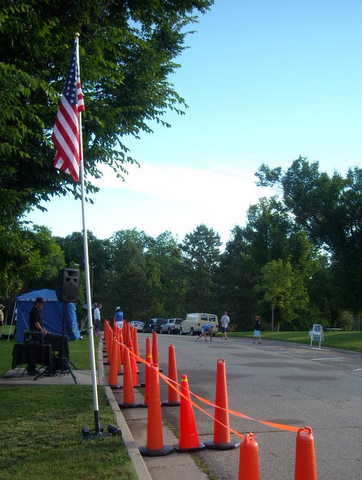 I’ve always thought that doing some sort of athletic event on a holiday was a good idea as vigorous exercise would help balance the inevitable calorie-rich hand-to-mouth activities taking place later in the day. The Fourth of July was no exception. And as could be expected in the uber-active town of Fort Collins, there was a morning race called the FireKracker 5k, now in its 40th year.

Before the race I helped the Fort Collins Running Club with registration for about an hour. In all there were nearly 1,000 runners. Just as impressive was how deep the field was, with 35 runners ultimately breaking 19 minutes for 3.1 miles (6:07/mile pace or better). With my newfound speed as of late I hoped to be one of those runners, but did not due to a few things going against me.

For one thing, my legs didn’t feel quite as fresh as in my last two races due to having done sort of exercise every single day for the last couple months. The crowds, hills (short and gradual but existent nonetheless), and many 90-degree turns also did not make this the most ideal course for a fast time. I figure the course characteristics meant at least a 20- or 30-second time penalty over a flat course with fewer corners to round.

Yet, by the time the race was over, I was satisfied with my effort—particularly because instead of sputtering out in the 3rd mile like a 1970 Dodge Ram with 250,000 miles, I was actually able to push the pace.

No one passed me in the final mile whereas I managed to run by at least a half dozen racers. Several of these came at the end—upon noting my watch was reading 18 minutes—I decided to do my best Garfield-chasing-Odie impression for the final 300-400 meters.

The last 100m was all uphill which aided me in catching some others until I was one step behind a guy who was about 15 years old and seemed to have an entire entourage of screaming teens rooting for him on the sidelines like he was Hannah Montana or something. After a quick glance over his shoulder towards me and hearing the raucous cheers, he decided that he too better sprint towards the line, and having already sprinted 200-250m at that point I really could not contest him. He beat me by a second.

Hmmm, Labor Day is not too far around the corner…

The following people are friends whom I saw and won awards:

Yes, I have many fast friends of varied ages and it was great talking with them and many others after the race. It also was nice getting a free massage from Nicole W. at a chiropractor booth minutes after crossing the finish line (“I kind of feel like a slacker for getting a massage after only running 3.1 miles,” I told her). Congrats to all!