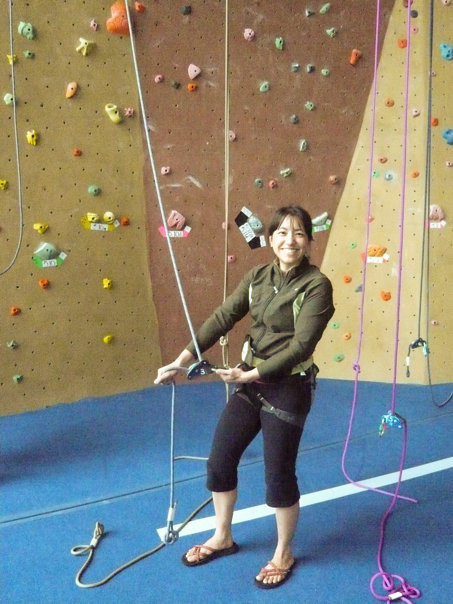 Now that a few of my dearest California friends have moved closer to me in Colorado (hooray!), it seems like I make the 2.5-hour direct flight into the San Francisco Bay Area a little less frequently than in years past. Hence, this weekend was the first time I was in California since December. Despite being there for not even four days, it was both eventful and enjoyable.

Highlights included visiting my folks; going to birthday parties for my 3-year-old nephew Koji and my buddy Loren; participating in a swim/run race, the Alcatraz Challenge Aquathlon; and indoor rock climbing with Alyssa, Bryan, and Stacey. We climbed at Planet Granite Sunnyvale on Friday and Planet Granite San Francisco on Sunday, the latter immediately after the aquathlon.

You might suspect that after all the exercise I’d be pretty sore, but unlike the last time I was in the Bay Area, Alyssa and Stacey took mercy on me and decided not to beat my body to a bloody pulp during climbing. A side benefit to having functional limbs was that I could easily lift food to my mouth on Friday night when we ate delicious Korean food, and Sunday afternoon when we went to Bi-Rite Creamery for what Alyssa described as “the yummiest ice cream in the world” (probably correct).

I even got to cruise in (a little bit of) style as the rental car company ran out of compact cars so they offered me a choice between a minivan, SUV, Grand Marquis and Chrysler Sebring Convertible. Of course I chose the topless option, and although the Sebring was otherwise a pretty mediocre car with a laughable trunk (with the top down it was smaller than any of my sports cars’ despite the Sebring being 2-3 feet longer!), it was nice to cruise with wind in my face under a temperate California sun.

I’m not sure exactly when I’ll be back but it will probably be sometime around the Winter Solstice like last year. At that time we’ll see if Alyssa and Stacey are still in a merciful mood, which I realize is as unlikely as lightning striking the same place twice but one can hope.

Oh, I don't know if it was mercy or pity. ;-) Besides, I didn't want to take you away from your beauty sleep as you napped on the floor at PGSF while the rest of us rocked out a bunch of climbs. ↩ Reply