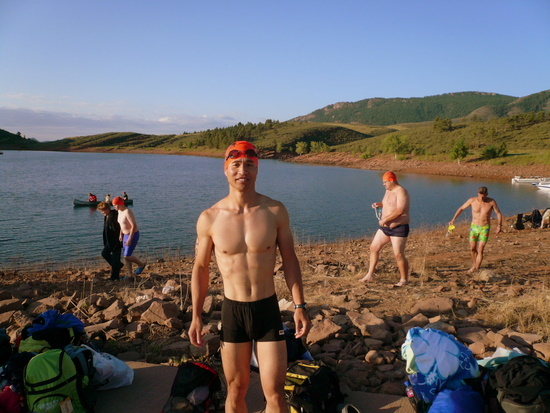 “I signed up for the Horsetooth One Mile Swim,” I told a friend excitedly one day in late July. “I looked at last year’s results and I think I wouldn’t even finish last!”

Yes, after my amoeba-like wetsuit-laden SF Bay crawl at last month’s Alcatraz Challenge in which my goal was to Simply Not Drown, I decided to do a local event in calmer waters to test how well I truly could swim. There would be no wetsuit to help keep me afloat, no running (or biking) afterward to conserve energy for or to rely on to make up lost time. I’d just be wearing skimpy swim trunks, goggles and swim cap to race against the clock for a whole mile. A first in my life.

However, in the intervening weeks between registering and the start of the race, my enthusiasm was doused as quickly as a coal-heated horseshoe immersed into a bucket of ice water. Quite literally, actually. This happened after a full afternoon of rock climbing at Horsetooth with Derek and Anita, when we jumped in the south end of the Horsetooth Reservoir as a refreshing end to a 90-degree day. It was that moment that I realized that even in August the water was virtually freeeezzing. Suddenly I didn’t seem to have the balls for this challenge. Talk about shrinkage.

The official website for the Horsetooth Swim did not ease my mind. One section of the Frequently Asked Questions read,

“I’m a rough & tough triathlete. Doesn’t this qualify me?”

We know you’re tough, but… a side effect of all that running and bike training is that it naturally reduces the body fat needed to help maintain body heat during a long distance open water swim.

We have had triathletes with Ironman notches on their belts who have experienced some problems with no wetsuits in the cold-water temperatures.

I got up early to take a shuttle from Hughes Stadium and the first thing I did after arriving at the official race start of Satanka Cove was swirl my hands in the water of the reservoir. I was shocked—it was much warmer than I expected! “OK, this is doable,” I announced to everyone witnessing this hallelujah moment.

The water, in fact, was 72 degrees. It was much warmer in the water than out in the air (56F). Apparently, the week after Anita, Derek and I took our Horsetooth plunge, water conservatory officials released over two feet of water from the reservoir which should have enabled it to heat up faster in the ensuing weeks. At least this is what John told me, a friendly guy I talked with before the race who was going to swim the 2.4-mile distance with a wetsuit.

Racers were called to the deck in an orderly queue by race number, the result of which I was one of the first people fully immersed in the water. Knowing that I’d be one of the slowest swimmers out there, I moved myself to the rear of the 1- and 2.4-mile groups which started the race at the same time.

When the race commenced I tried to stay relaxed and stroke easily. But after a few minutes I experienced both discombobulation and even a bit of panic. The former emotion stemmed from not knowing exactly what to sight and aim for. The latter was realizing that everyone—and I mean everyone—was leaving me behind, fast!

Eventually I settled into my own rhythm and decided not to pay attention to the other swimmers. Not that I had a choice—after 10 minutes everyone else was so far ahead I could not see another racer while sighting. I only saw orange swim caps again when the turnaround buoy was clearly in view and the other swimmers were already making the return trip back to the dock.

It felt like a long time between seeing the buoy and actually reaching it, but once I did I felt a heavy weight lift from my mind. Halfway done! And I knew exactly how to navigate back since it was simply retracing what I had just swum.

I swam with seemingly my own personal escorts in kayaks (one “benefit” of being behind everyone else), and when I was in Satanka Cove again there were spectators lining the shore shouting encouragement. I appreciated their support. With the finishing deck in view, their cheers motivated me to kick more frequently and stroke along harder. The second half of the race went a lot faster for me than the first.

Still, when I got out of the water and clicked off my stopwatch, I couldn’t help but shake my head while pondering my time. Forty-seven minutes! Actually it wasn’t much of a surprise as a swimmer friend and I had speculated the day before that the race would take me 45-50 minutes. But deep down I thought on a perfect day, I was capable of swimming a mile in 40.

It was not a perfect day.

Moments after getting out of the water, putting on some clothes and text-messaging a friend that I did not die, I was shivering so pronouncedly and uncontrollably that I splashed chicken noodle soup all over myself while futilely trying to hold the bowl it was in. A paramedic standing nearby took pity, fetched me a cup for the soup, and suggested that I sit inside his van to warm up. I took him up on this offer and stayed inside the van with the heat on for 10-15 minutes until I stopped shaking.

I couldn’t even imagine myself swimming the 2.4-mile or—oh, heavens—10k race without a wetsuit in the Horsetooth Reservoir and not getting hypothermia, especially during any other year when the water was colder than 72 degrees. Not that I’d qualify for the 6.2-mile option considering my snail-like swim speed.

In fact, I did finish last in the race. The three DNFers and two swimmers from last year whose times I would have beat did not participate, nor did the 40-minute group of masters swimmers whom I possibly could have kept up with. Apparently, only the “real” swimmers showed up today and all of them finished within 19-29 minutes.

On the positive side, I completed my first no-wetsuit swim race and now have a baseline mile time for future reference. Next year I’ll probably give the mile swim another shot. But it would be in waters warmer than the Horsetooth Reservoir’s, preferably after I’ve had my freestyle technique videotaped and analyzed and I’ve put in much more time in the pool.

Good job! I'm working my way up to swimming a mile in our pool; we figured it's around 100 laps (back and forth). I do appreciate the ability to rest between laps; not sure if I could make it to the buoy without something to hold onto! BTW, the temperature in our pool is about 74 degrees these days. ↩ Reply