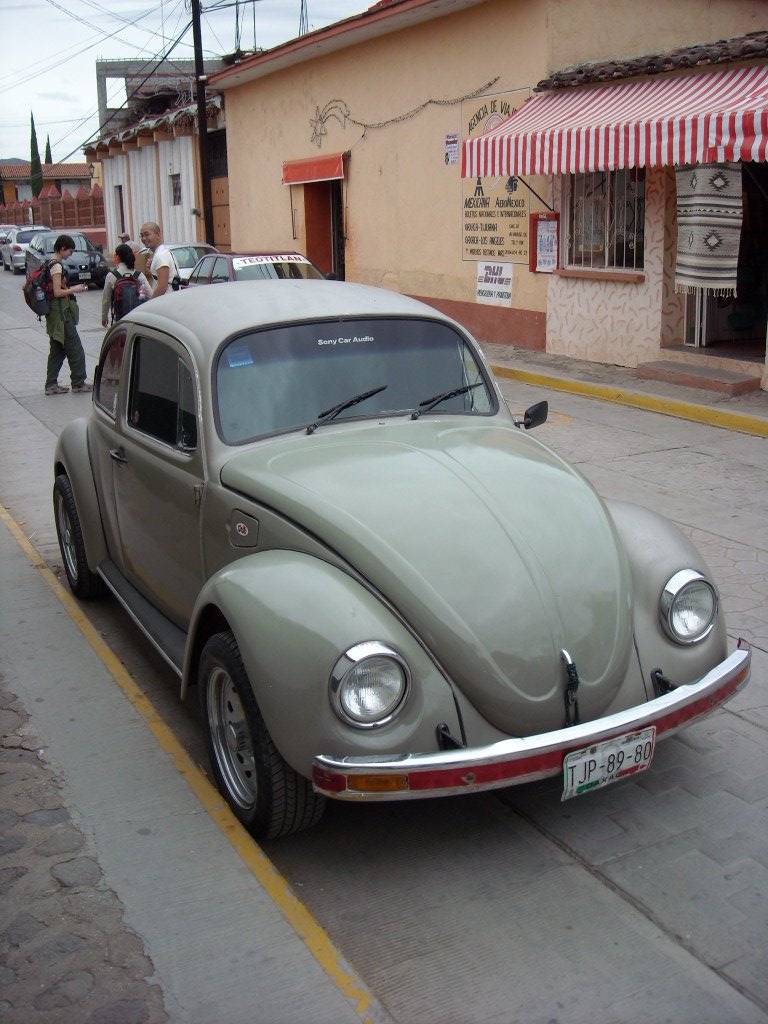 Considering the vehicles that have found a home in my garages, one can correctly surmise that I have had a long-time leaning towards European autos. Lately, however, I have developed an appreciation for new Detroit iron flouting Yankee flair, characterized by bold, love-it-or-hate-it lines, macho design cues, and sometimes a bit of nostalgia thrown in for good measure.

Mexico, therefore, was a delectable feast for my eyes.

Its landscape of gasoline-powered four-wheelers is a virtual marriage between the car markets of western Europe and the United States. Most cars are compacts or subcompacts, but a sport utility vehicle can occasionally be heard rumbling down the street. The car I saw most in Mexico was the classic Volkswagen Beetle, but the 90s Nissan Sentra make up most of the taxi fleets (at least in Oaxaca de Juárez).

Many European marques we don’t get in the United States are well represented in Mexico, including VW-owned, Spain-based SEAT and Renault and Peugeot of France. I saw an old Citroën 2CV from the 1960s but nothing newer. The Italians still do not have much of a presence as I did not see a single Fiat, Alfa Romeo or Lancia. Perhaps that will change soon now that Fiat owns a substantial part of Chrysler and is posed to even bring some of their cars to the States.

Of the American cars, there are just a few here and there except for those from Chevy. There were Chevys based on Daewoos and also the popular Tornado, a car-based pickup that could well be the spiritual successor of the old El Camino.

The other models that have made it south of the U.S. border tend to stand out like Lady Gaga with more flamboyant styling than those from Europe or Asia. I was delighted to see a few Ford Mustangs, and there must be some Mexicans with Camaros as well as I saw a large Chevy billboard advertising Transformers‘ four-wheeled star. There are also Chrysler PT Cruisers, Chevy HHRs and Dodge Calibers, which feature far more interesting design cues than the other five-door hatchbacks that are popular in Mexico.

Of course, there are some SUVs as well, such as the Jeep Grand Cherokee, Ford Escape and Honda CRV. They comprise a much smaller percentage of the auto fleet than in the U.S., however, perhaps due to their poorer gas mileage and whale-like size that makes driving through the smaller streets a chore. (Gasoline, by the way, costs about the same in Mexico as in the U.S. at around eight pesos per liter, or about US$2.35/gallon in current exchange rates.)

Of the German cars, Volkswagens are by far the most popular, but I also saw many BMWs, MINIs (British in spirit but manufactured by BMW), and Audis as well.

Interestingly, I didn’t notice a single Hyundai or Kia. However, Hyundai does have a Mexican web page, although the distributor contact information is listed as a Chrysler e-mail address.

In sum, the Mexico auto marketplace offers a cornucopia of interesting vehicles from around the world, even more so than the U.S. market due to the presence of cars from Spain and France. There are also all those old Volkswagen Beetles putzing down the streets!