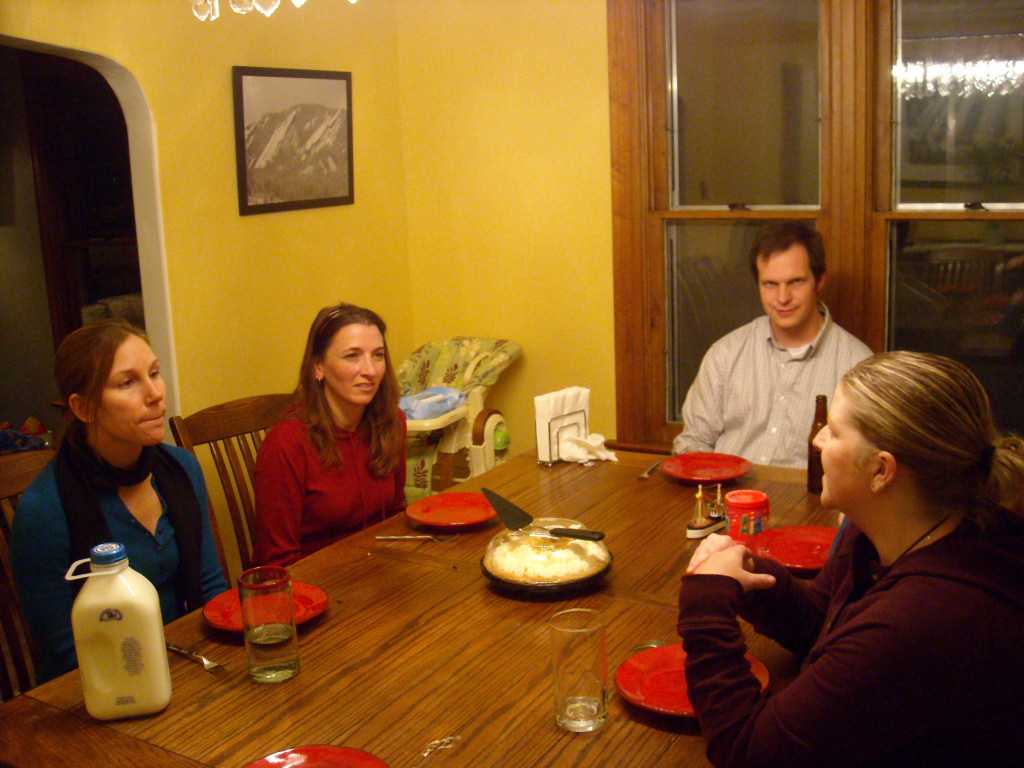 Even among best friends it is hard to predict the future. I was reminded of this one fine evening when Lisa, Tori and I were at Charis and Chris’ and marveled about how 10 years ago none of us could have ever guessed we would all be sitting around a dining table in Fort Collins.

I met Tori at a mutual friend’s birthday party back in 2000, and soon I was rock climbing with her and Charis on mini day trips in the San Francisco Bay Area. The two of them had been climbing regularly including many times in Yosemite, although I do remember at one point Charis lamented that Tori was getting too hard-core (“she even made me climb a mossy rock!”) And not too long thereafter Charis started dating bike-loving (and now-husband) Chris and sort of dropped out of the climbing world and, later, the Bay Area. She moved to North Carolina to attend nursing school at Duke University.

Lisa and I first met around January 2003 when Tori invited her into my old indoor rock climbing gym, Fremont’s City Beach. That was one of the final times Lisa scampered up plastic for a long time, but the two of us bonded over our mutual interest of running, biking and swimming and even did our first triathlon together (a sprint-distance Tri-for-Fun in Pleasanton). She, like Tori, quickly became one of my dearest friends, and even after I moved to Colorado I’d make a point to visit Lisa whenever I found myself in the Bay Area.

Fast forward to the years during the second half of the first decade of the new millenium. In October 2005, I chose Fort Collins as my new home after years of researching potential places to move to and the Great American Road Trip. A few years later, Tori—who shared many of the same ideas, ideals and goals (it’s part of the reason we are best friends!)—followed suit, purchasing a sweet house in April 2008 and making the Fort her full-time residence in early 2009.

Shortly after Tori bought her Fort Collins home, she heard from Charis out of the blue for the first time in several years. She was now living in Boulder! And by mid-2009, Charis’ husband had landed a job as a professor at Colorado State University, so they moved to Fort Collins.

Meanwhile, Lisa was undergoing changes in her life. She had mused about escaping the Bay Area rat race for a while now, and soon was obsessing about moving to Denver. Of course, I totally encouraged that notion. But what ultimately got her to move to Colorado was meeting a man named Jeremiah who lived in Colorado Springs. They started dating, eventually got married, and now live just a couple hours drive down south from where Charis, Chris, Tori and I live in Fort Collins.

So in a remarkable set of coincidences, we all found ourselves within a virtual stone’s throw of each once again just a few years after I moved away from the Bay Area. Was this fate? In any case, we all plan on living here for a while and you can bet that it makes living in America’s best place to live even more enjoyable when your best friends live here too.

Who’s moving here next? There is still plenty of room!

March 20, 2010 (Sat): So today I was indoor rock climbing in Thornton, CO with Lisa. Before we jumped on a wall someone approached me from behind and said, “Excuse me, don’t I know you from–”

I turned around and immediately gave the woman a long bear hug as I couldn’t believe it was her. My old friend Sharon! We had met at Indian Rock in California in 2001 and in that meeting learned that we knew the same Professor Mungal who was my advisor when I was an undergrad and was someone Sharon was working for while doing her post-doc at Stanford. During the next year, we became good friends and not only climbed at places like Big Chief and City Beach, but also did fun activities together like carving pumpkins.

Unfortunately, we completely lost contact after she moved away from the Bay Area in 2003. It took a chance meeting seven years later to reunite ourselves.

It shouldn’t be another seven years, however, until we see each other again now that we know we live rather close to each other. How close? Apparently, even though we ran into each other in Thornton, she lives in Fort Collins only a 15-minute drive away from my home. She lives closer to me now than she did eight years ago in the SF Bay!