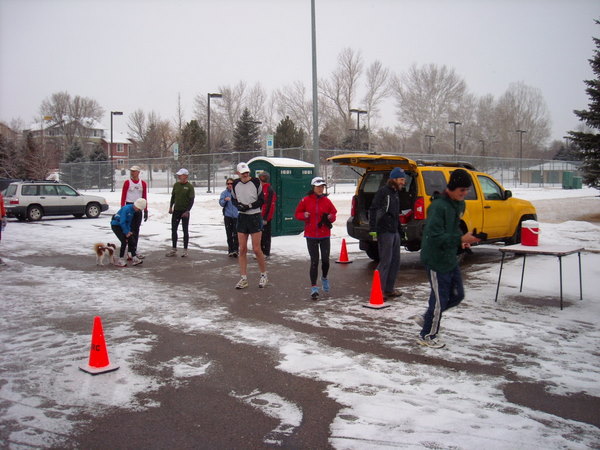 It may have been considered balmy (around 30 degrees) compared to previous 10-kilometer Tortoise & Hare races, but there were a couple early morning signs that this winter’s Lee Martinez Park 10k would be no cakewalk. First was the way my all-wheel-drive roadster went around a corner onto snow-covered College Avenue: a four-wheel slide, Steve McQueen style, but at at 10 mph. Second was the sight of two race participants abruptly quitting the race after only 1.5 miles. One of them was ambling back to the staging area not long after I commenced this fastest-people-start-last race, and he yelled, “ice beyond the [something that sounded like ‘ramp’].”

“Ramp, what ramp?” I pondered for the next half mile. Sure, the entire length of the Poudre Trail was blanketed with a one-inch layer of fresh powder, but the only ramp I saw was a bridge leading off course. Then I ran around a downed branch in the middle of the trail and—quicker than you can say, “oh crap!”—my feet slid out from under me and my left elbow smacked the pavement with the weight of my body on top of it. So the man who yelled out the warning earlier must have shouted, “ice beyond the branch.”

My legs were already not feeling at all fresh for running 13 miles with Raquel and 4.5 during the 3rd Annual Human Powered Brewery Tour the day before, but any illusions I might have had that I was going to run like the wind today hit the fan the instant I thumped onto the ground. Not only did I lose 10-15 seconds picking myself up after the fall, but at that point I decided that my only goal today was to survive the race without getting injured.

It didn’t help that the rest of the pavement was covered with enough snow that my feet slipped with every push off. Consequently, my stride length was noticeably shorter than usual. In addition, on the return leg of the out-and-back course, I nearly wiped out again near the branch even though I knew there was ice and was trying to gingerly tip-toe around it.

The result was I caught only one person in this staggered-start race (in fact, this person was walking and far enough back that the race director—my buddy Nick—at first didn’t even believe he was part of the race when I mentioned him). Worse, my finish time was a personal record for slowest 10k race at 46:59. This was even more turtle-like than the first 10k I ran 11 years ago during the night in Palo Alto when I ran less than Jared Fogle, pre-Subway diet.

Ah, well. At least I got to see friends from the Fort Collins Running Club and have breakfast with them at Gib’s Bagels after the race. I made it through the run without fracturing any bones or bruising an arm. And now I know that if a branch is placed somewhat oddly in the middle of a trail, it may be a warning of something dangerous ahead—like ice.