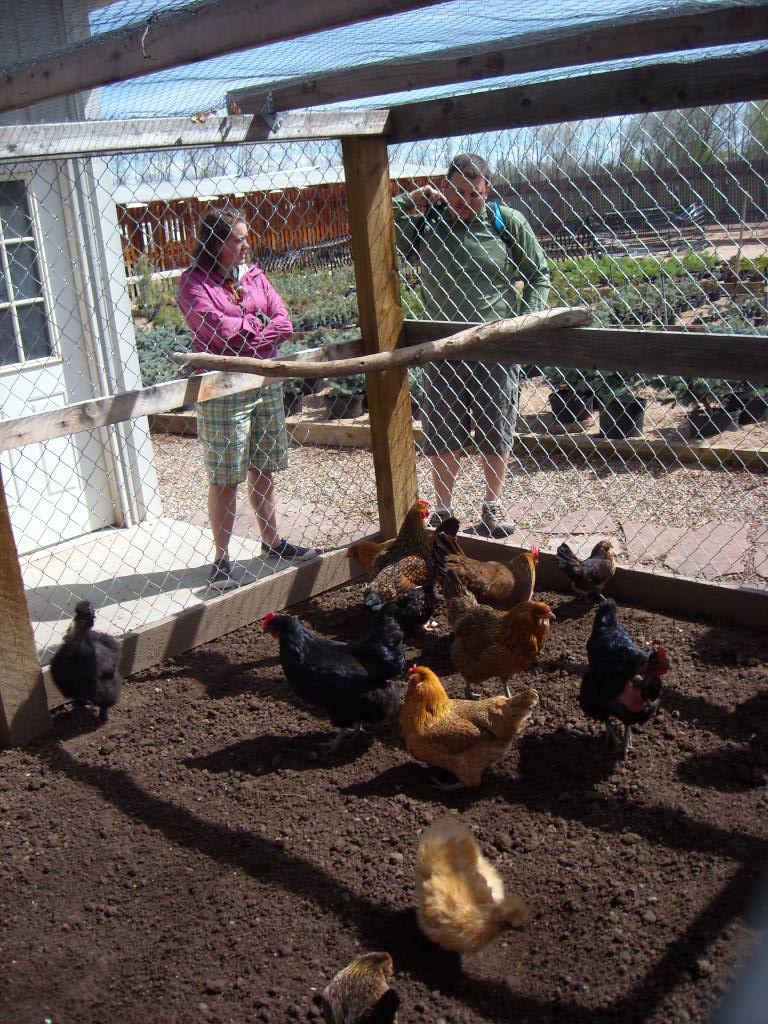 “We have to do this,” I excitedly told Leah. “The Tour de Coop! It is an eight-mile bike ride in Fort Collins on Saturday, May 1st going from chicken to chicken, learning about our feathered friends from beak to butt. Don’t worry, we won’t be eating any!”

I had to add the last part since Leah is a vegetarian. But I really didn’t have to do much more prodding than I did. It turned out the cutie wants to raise chickens one day. “And goats,” she added.

So on Saturday morning I pumped up the knobbies on Cranky, which I decided would be my ride today. I rode over to Leah’s and from there we rode 2.5 miles to the official start of the ride—a backyard with a greenhouse, hammock, and table covered with posters, waivers and munchies. And Coop #1. Already here were Charis, Chris, their kids Aidan and Zoe, and of course my dear friend Tori.

This may have been Northern Colorado, but for a moment I felt like I was in a mini Woodstock minus the booze and drugs. While a long-haired dude strummed his guitar, folks predominantly in their 20s and 30s wearing earth tones and hippie garb gathered around. Others had feathers in their hair in deference to the honored bird of the day, and one person even dressed up as one giant fowl.

For our part, Leah had a stuffed (fake) chicken strapped to her handlebars, and I had a little chick (or a duck?) tied to my helmet. (“Is that a cat toy you stole from your kitties?” Tori asked me, to which I corrected her with the word “borrowed.”) I also had printed out a bumper sticker that read “Real men [heart] chickens” which I attached to Cranky’s top tube.

Tori was wearing a red shirt that had four yellow chicks silkscreened to the front with the admonition, “Cruising with my peeps.” You can say we had the chicken spirit. Colonel Sanders would have been proud.

At Coop #1, a gentleman noted this was the third year of the Tour de Coop—“but only the second year that it was legal.” He explained the benefits of chicken poop for compost, how chickens can usually stay warm on their own down to about 20 degrees Fahrenheit, and how fowl love eating worms and even the occasional mouse.

From there we rode a few blocks west to a neighborhood I dubbed “Chicken Alley.” This is because along this alleyway there were no less than three separate households with their own chicken coops. I asked one of the owners how she decided to raise chickens, and she said she was inspired by her “outlaw” neighbor who had urban hens even when they were illegal. Another owner said “when raising hens was lawfully allowed I was immediately on it” in order to have fresh, daily eggs and a good supply of compost.

After visiting at Coops #2 and #3, we walked over to Coop #4 (still in Chicken Alley). What was funny was that the owners (a couple who looked like were in their 20s) were unaware that the Tour de Coop was going on and were quite surprised to see a throng of 40 chicken enthusiasts gawking at their hens. They graciously came out and talked to us about their chickens and showed us an egg that they had just collected that morning. It looked like it could have been made by a pterodactyl, it was that huge.

We then rode over to Coop #5 which had various, beautiful hens in a professionally built coop covered with a “green roof” (a roof layered with dirt and xeriscape plants—one that would help the coop retain heat and lessen the noise of rain and hail). Half an hour later we hopped on our bikes again to Coop #6 near Laporte, whose owner just so happened to be someone I know from frequenting the Bean Cycle. Her husband talked at length about the trials and travails of raising his chickens—particularly in protecting them from predators.

“At one time we had 19 chickens but they were all killed by dogs and foxes,” he lamented. Now he has a bunch of five-week-old chicks which he keeps safely rounded up (especially at night) inside a wooden coop that he hardly ever cleans. “I heard from the owner of the Laporte Old Feed Store that he only cleans his coop once a year, and I was all over that,” he said to laughter.

Speaking of the Laporte Old Feed Store, that was our last stop. The owner was someone Tori and I recognized as the opening speaker at a Joel Salatin “In Defense of Food” presentation at the Lincoln Center in March, and it was a pleasure to hear him talk again. He noted a number of things I did not know, namely:

After the presentation we all had a picnic, with lunch provided by the Fort Collins Food Co-op. This included quiche, bread, fruit and tea. No chicken, though. I suppose it would have been awkward to eat fowl immediately after visiting them anyhow.

Here’s a brief video I made of the tour and our feathered friends. Enjoy.