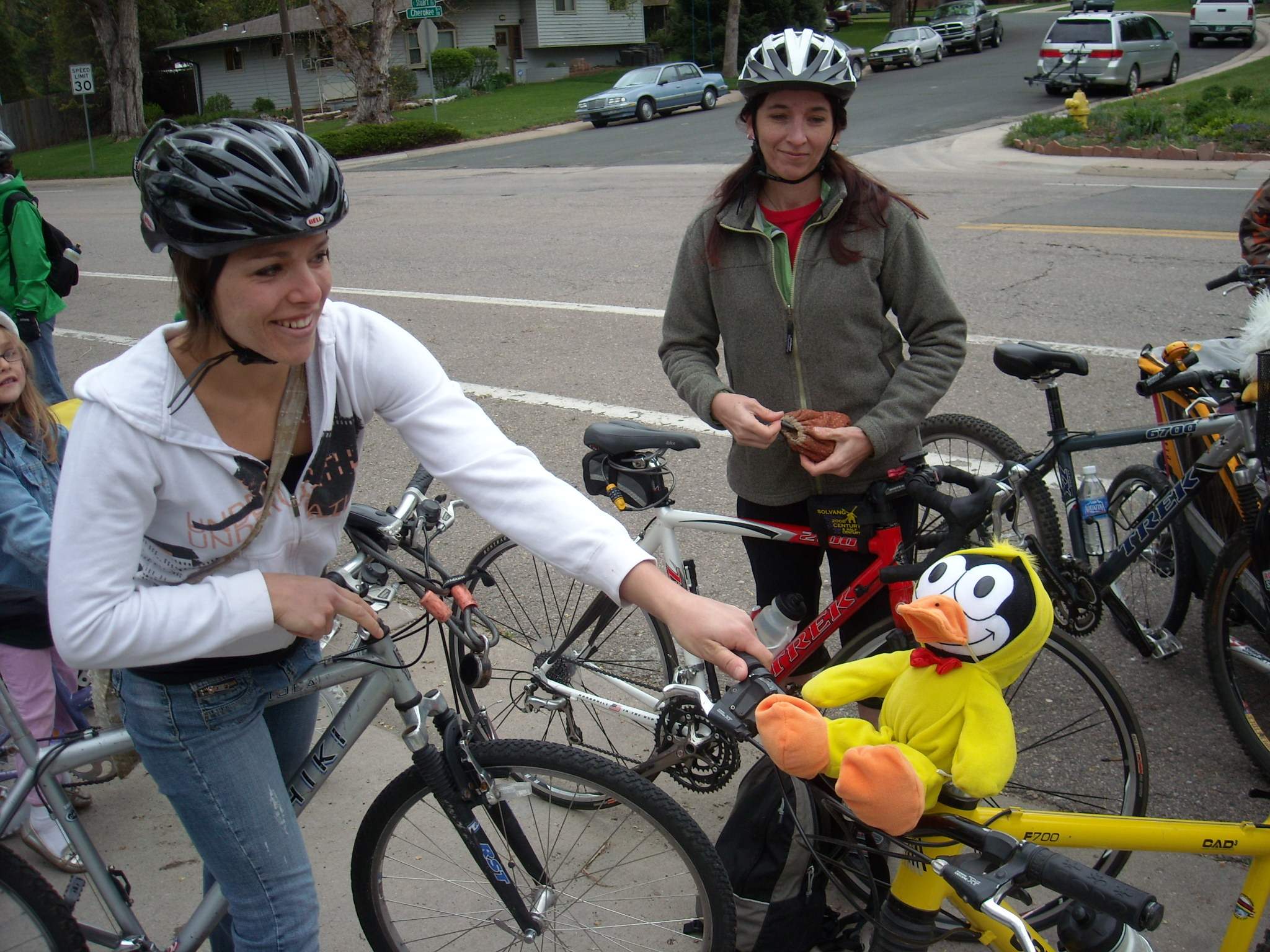 “I thought it was the Tour de Coop?” I asked Tori, who mistakenly tweeted about the ‘Tour de Coup.’ “Unless you were planning some sort of coup on poor chickens?”

“Yes… bring a backpack,” she replied. “We are liberating the hens from their imprisonment.”

It was good that Tori was joking because if she did have some sort of chicken freedom agenda, she should have brought a bigger backpack. (Reminds me of my dad who—25 years ago—kidnapped a rooster from a home under construction next door because it kept waking him up at 5:00 in the morning, and “liberated” it in walnut acres four miles away.) This is because the third annual (legal) Tour de Coop included visits to no less than eight urban chicken coops during the six-mile bike ride.

Eight chicken coops meant a lot of chickens because per Fort Collins law, each coop is allowed to have up to six chickens. Most of the coops we visited had at least three cluckers, so we saw close to 40 of them. This is not even counting the stuffed chickens Charis and her son Aidan had on their handlebars, or the Felix the Cat wearing a chicken outfit on my bike. You could call him Felix the Chicken Impostor.

Of course, we just didn’t gawk at a lot of chickens. There were other interesting things to look at as well, including the coops themselves. These pens were of different shapes and sizes, and ranged from professionally built that resembled miniature models of the owners’ own homes, to the cobbled together from reclaimed materials, to particularly creative ones such as the coops whose roofs were made from donated, sawed-off skis. The owner of the Ski Chicken Coop even built a wheeled chicken pen that he could tow with his bicycle.

Other highlights of the tour included the dazzling bicycles participants rode. Many were newish cruisers including at least half-a-dozen New Belgium bikes (of the bicycle-loving brewery that is headquartered in Fort Collins), but there were also older ones such as a pair of Schwinns that a guy named Ted lovingly restored for him and his wife. A couple bicycles were loaned out from the Fort Collins library that sported front “wheelbarrow” seats that were perfect for infants.

At the end of the tour there was a large spread of healthy salads, pickled vegetables, quiches, etc., much of which was donated by Grant Farms CSA. In sum, it was a fun little bicycle tour even if no coups were staged or hens were kidnapped.

Here is a video from this year’s Tour de Coop!