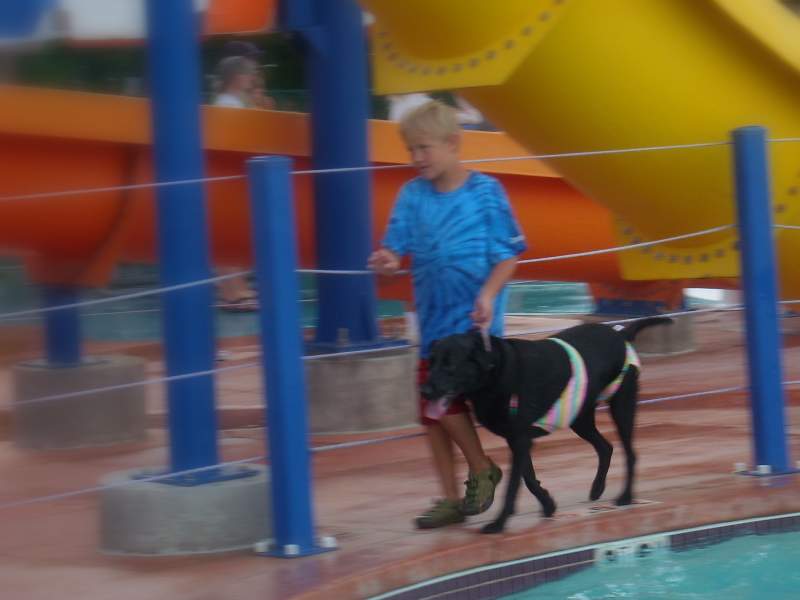 With college kids arriving in town by the truckloads and Labor Day quickly approaching, one gets the sense that summer is winding down. If there was any doubt, all you had to do was go to Fort Collins’ City Park on the 15th of August when the pool was being shut down. FC has a particularly unusual way to mark this occasion: they allow people to take their dogs off-leash to let them run amok. Swim amok, too.

“Hey, look at that dog!” Leah exclaimed. There were about a hundred here, but the one she was wagging her finger at was not hard to identify. This is because it was wearing a bikini.

In contrast, the other furry four-legged creatures were sunbathing (and swimming) in the nude, aside from a few “safe” ones who were wearing red life-jackets. This included Tori’s new puppy, Sadiq. When Leah and I saw him, he was skipping along with two other doggies, as if they were Best Friends Forever or something. He was, however, perfectly dry.

“I don’t know why!” was Tori’s reply when pressed as to why her beagle wouldn’t leap and belly-flop into the clear chlorinated water like 98% of the other dogs. “It’s not like he’s afraid of the water. Last week he was even in a kayak…”

Perhaps he was just biding his time while he bounced around with his new BFFs. Unfortunately, he couldn’t stay too long because then he got a boo-boo in his paw. A yellow jacket might have stung him. Whatever the case, Tori and her folks (in town visiting for the weekend) had to carry him off and drive him home, and he was deprived of his chance to do his best impression of a Chinese diver into the pool. Poor Sadiq.

Leah and I stuck around to watch the “action,” during which we encountered our friend Stan. He had a dog he was really attached to for many, many years, but earlier in the year she went to the big doghouse in the sky after living a long and happy life. So Stan—still somewhat mourning the loss—came here to get his dog fix.

I took some video of the event; it is below. I would have given some of the participants as high as an 8.4 for some of their dives, but this wasn’t the Doggie Olympics. Instead, it was just an annual tradition of my beloved hometown to mark the end of those Dog Days of Summer.