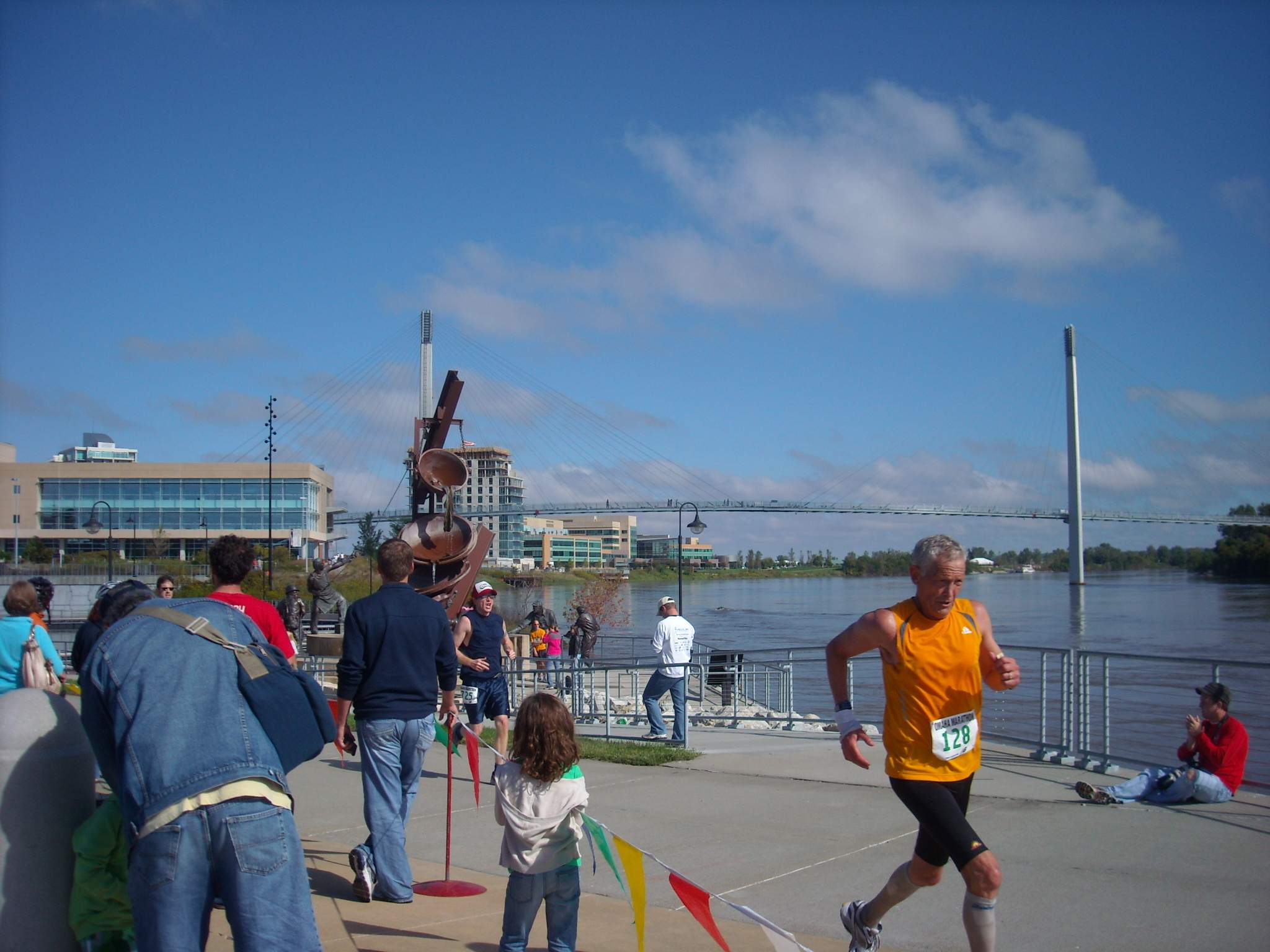 You would think that it would be easy to find something to eat in a city that’s home to the second richest man in the world. After all, a multi-billionaire could easily afford to live in any city, island or nation that he wanted to, and Warren Buffett chose to remain in Omaha, Nebraska. I’m pretty sure he wasn’t staying here for convenient airport shuttles (it took nearly an hour for a hotel van to fetch me) or because Omaha is some amazing cultural mecca in the heartland of the American midwest. But maybe he was encouraged to do so by Omaha’s proclamation that (like many cities I have visited, such as Knoxville, Tennessee, or even my hometown of Fort Collins, Colorado) it has “the highest number of restaurants per capita.”

Whatever. I had no car and got back to a downtown hotel at 10:45 at night, and on the aforementioned turtle shuttle I did not see a single open restaurant or convenience store along the way. The next morning I took a taxi to the start of the Omaha Marathon and also did not see any open place with food, so I had to run the marathon after not having eaten a single thing for 13 hours. Clearly, I should have packed something to eat in advance, but that would have meant being more organized and less in a rush during this whirlwind Denver-Sacramento-Stockton-Omaha-Denver jet-setting 4-day weekend.

“Ah well, it’s a training run,” I mused. I wasn’t particularly worried about starving, particularly since I planned on gulping Gatorade at most aid stations around the course, of which there were plenty. More concerning was my fitness level, or lack of. Due to work, life, etc., the amount I ran since the Grand Mesa 100 fiasco was only a little more than your average couch-flopping American Idol watcher.

The presence of hills was another thing to be considered. Hilly marathons over the years have exposed a weakness, that any course with bumps in the road longer and taller than an overpass generally reduces my decent speed range from 25-26 miles to 20-22.

So I started the race conservatively, positioning in between the 3:15 and 3:30 pacer groups in the starting area. I kept a pace around 7:20-7:30 miles after an obligatory two-mile “warm-up” and didn’t start hauling ass until some rather steep downhills around Mile 13. Halfway done. There were only two or three women ahead of me at this point, and a top-five age group finish was even looking like a possibility. I held out hope for some miracle that I wouldn’t fade in the final five or six miles unlike in 100% of hilly races of yore, notwithstanding laughable preparation.

Alas, miracles rarely happen and even less so for something as mundane as going out for a fun run. Despite the copious amounts of Gatorade I chucked and the comfortable late-September temperatures that did not cause the body to pour out prodigious amounts of sweat, I bonked around Mile 23—preceded by a gradual slowdown where passing the next mile markers started to take more than eight minutes. After Mile 23, stride length was midget-ized enough that despite steady leg turnover of about 180 steps per minute, instantaneous mile pace was now two minutes slower than in the first half.

The brain was also shutting down, as evidenced by making a wrong turn with only 1.5 miles to go even though the course was very well marked. Good thing there was a bystander to shout, “you’re going the wrong way” to return me to the course after losing a mere eight seconds.

In the final mile, I chugged along the downtown riverfront (also the Nebraska-Iowa border) when the 3:30 pace group—running a few minutes ahead of their prescribed time—and seemingly a whole score of women (including this gal) trotted right by me. My friends Alyssa and Eddie would have had a field day if they witnessed how extremely I was getting chicked here. Yet, I was powerless to respond and keep up for more than 10 seconds, after which the legs defiantly declared, “no más.”

I crossed the finish line sans trademark sprint and took some consolation that at least I finished under 3:30—3:28:41 to be exact. Still better than, say, John Kerry’s, Michael Dukakis’, or George W. Bush’s best marathon times.

After the race, I limped the two miles back to the hotel, keeping an eye out for restaurants. I did end up finding two of them: a Subway and a McDonald’s. I purchased a foot-long tuna sandwich on wheat from the former all while deciding that Mr. Buffett is probably too busy to eat gourmet in this town anyhow.

Warren Buffett probably has a personal chef, so he doesn't have to worry about foraging and cooking. :) ↩ Reply