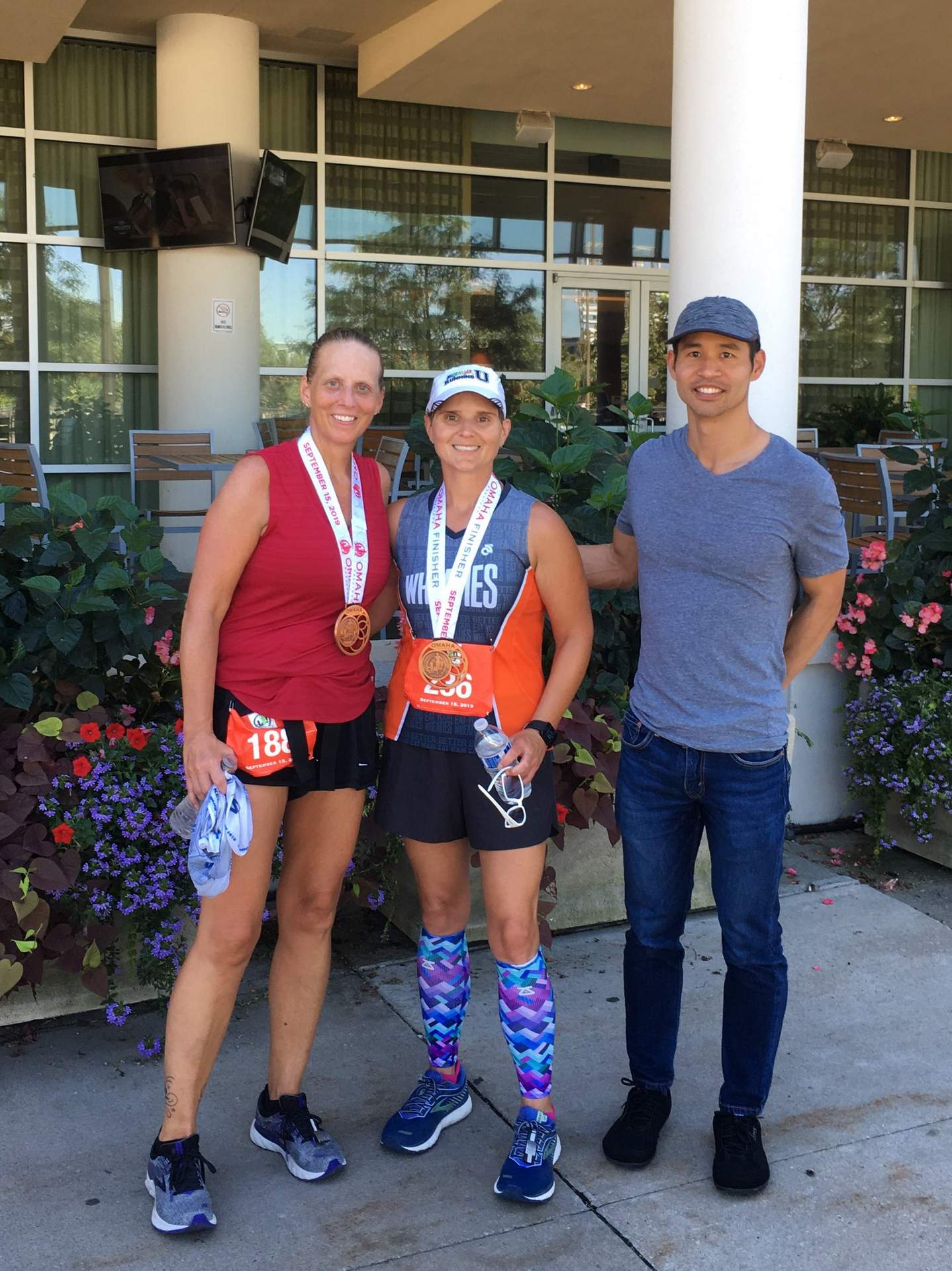 When walking over from the Hilton to the race start of the Omaha Marathon, there was something of a hallelujah moment: my legs weren’t that sore! At least I had been expecting them to hurt more after running yesterday’s Wabash Trace Trail Marathon as hard as I could.

My friend Mel (who also ran Wabash), her friend Connie, and I started talking about race times. “I think 4:30 is in the cards today,” I replied, having now ratcheted down the goal from five hours. Mel’s leg was hurting quite a bit so she said that she was going to only power-walk, and that she might drop down to the half-marathon distance if her leg wasn’t holding up.

Feeling no pressure to put in a fast time or even complete the whole race (having run Omaha already in 2010 in 3:28), I employed Jeff Galloway‘s run/walk method. This entailed running 0.9 miles and walking 0.1 miles every mile. I’ve never done this in a marathon before so was curious as to how well it would work out, especially since I had passed on Galloway’s recommendation to new marathoners. The guru (who represented the U.S. in the Olympics in the 70s) said that the walking would “reset” the body and enable it to go farther, all while not dragging down the average pace too much.

He was right about the latter. While running the first half, my instantaneous running pace was 9:20-9:30/mile, and with the walking factored in, my mile splits were still in the 9:45/mile range despite walking pace being a mere 15 minutes/mile. I finished the first half in 2:05—a mere three minutes more than the second half of yesterday’s marathon despite running 99.9% of that—and was thinking that maybe a 4:10 finish was possible.

At Mile 15 of this out-and-back course, I passed by Mel going the other direction, who was at Mile 11 and clearly had decided to do the full marathon after all. She asked how I was doing. “Good!” I sincerely replied.

Alas, despite the walking, at Mile 19 my mile spit registered about 10 minutes for the first time. For some one the later miles, it was even above 11 minutes. Any hope for a negative or even split was gone.

The main thing compounding fatigue was the heat. By that time of morning, the temperatures had gone above 80 degrees with high humidity. The shade in the neighborhoods helped temper it, and so did all the water/Heed stations that were present every mile in the second half. After Mile 20, I was usually getting three cups: two-and-a-half to drink, and the rest to splash water on the neck and legs to stay cooler.

A fellow marathoner was chatting into her cell phone while walking, saying “It’s really hot out here. Lots of people are walking.” Indeed.

It got even hotter when the race course got out of the residential neighborhoods and was fully exposed to the sun. Plus there were some hills in the last couple miles. Nothing steep, but also not so welcome.

With a mile-and-half to go, a bunch of text messages started flashing on the screen of the Garmin. First there was one from Rachel, informing me that her partner Casey had just finished a 100-mile run in Steamboat Springs after 32 hours.

Then texts from Brooke and Manuel came in, effectively asking if I was done. “Hang on,” I thought, “just over a mile to go!”

The final 1000 meters was nice: a long straightaway that was downhill. I picked up the pace to below 10 minutes/mile, then 9 minutes/mile, and then under 8 minutes/mile when I heard my name called out. It was Manuel who had come out of the hotel to see me finish. I sprinted in the last 50 meters.

Final time: 4:23 and change. I’ll take it. It’s actually my best time for running a second marathon in a double-marathon weekend, of which I’ve done three times prior.

I walked back to the Hilton almost immediately so as to have plenty of time to shower before the 12:00 p.m. late check-out time, which Manuel had thoughtfully requested while I was out on the course. Then Manuel and I hung out in the Hilton’s breakfast room, peering outside the glass windows to watch the runners come down the final straightaway.

Suddenly, Manuel said, “there’s Mel!” We bolted out the door and tried to run after her, cell phones in hand to try to take a photo. But after about 50 feet my legs exclaimed “no más.” It was pretty comical; the legs were now useless to chase her down even a short distance.

Oh well, at least I managed to get this photo, courtesy of digital zoom:

Mel finished in 5:48—a good 42 minutes before the time limit. She had now completed 30 marathon states.

Impressively, she did manage to power-walk all but less than a single mile, in which she was running. Man, she can walk fast! If I hadn’t seen it, I wouldn’t have thought it was possible to beat six hours walking the whole way.

In fact, she finished 12 minutes ahead of Connie, who was running nearly the whole way. Connie must have slowed in the second half because she was at Mile 12 when Mel was at Mile 11.

Whatever the case, kudos to both of them for hanging in there. As hot as I thought it was when I finished, it was several degrees hotter (90 degrees Fahrenheit) when they did.

Good thing we were not running a third marathon this weekend. Unlike after yesterday’s race, my legs were definitely very sore after today’s.