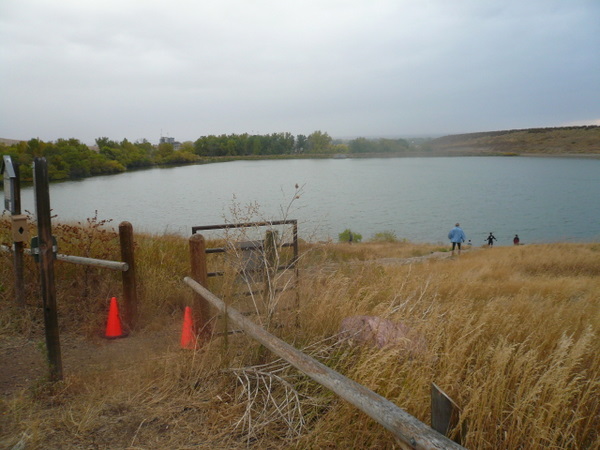 To say that the Pineridge 4 Mile Trail Run started out a little chaotically for Leah and me is kind of like saying that Mel Gibson has had a fair number of run-ins with the law lately. For one thing, Leah was dressed a bit optimistically this dark morning where the wind reached flag-tearing velocities and the sky spit weak rain as if this was the Pacific Northwest.

“Here, have some gloves,” I said to Leah after going back to the car to fetch her some dollar store specials.

“Here, have my jacket!” offered Hunter, giving her his jean jacket.

“I’ll run with you!” said Connie, who was recovering from an injury. And off Leah and Connie went.

For me, the start of this staggered-start race (the first of this season’s Tortoise & Hare series) went even less smoothly. I was still stripping clothes off in my car when I heard Nick yelling out, “Felix! Felix! FELIX!” Apparently my start time had already come and gone.

I tore off my pants and sprinted from the car to the start line, already panting like a dog by the time I had passed the starting cones and started to descend some stairs towards the Dixon Reservoir. It’s just as well—before the race I had already decided this was going to be something more of a training run, or exercise to help me justify eating free post-race bagels.

The first mile I was actually moving pretty well, but then some speedsters who started only a few seconds back (because of my late start) caught and dropped me. From there on, I put myself on cruise control, being particularly conscious not to trip and fall.

I even managed to catch a few runners, ensuring that I did not finish last. But with a few hundred feet remaining and being cheered on by runners above who had already finished, I succumbed to one of my annoying habits—I made a wrong turn. At least there were many people to witness and subsequently yell out, “wrong way!” to get me back on track. I only lost five or ten seconds or so.

I crossed the finish line with Nick urging “do your finishing sprint!”—which was not really possible with the stair-climbing—in 26:26 for 3.75 miles. That’s 7:03 pace on sometimes rocky terrain that is beyond my specialty. I’ll take it.

Afterward, Leah happily reported that she finished second in her very first Tortoise & Hare race. She was moving well enough that Connie even let her go at the end. So at least for one of us, the race did not end so chaotically after all.