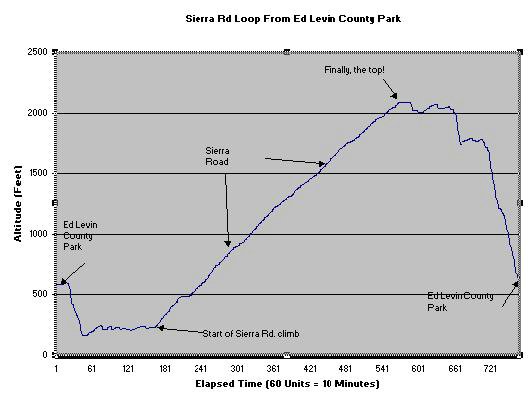 Over the years I’ve gotten some pretty interesting comments on this blog. No, I don’t mean the “see my boobs at SheilaStripsXXX.com” spam-type comments that make it through my server-side filters once in a blue moon—but notes that are thoughtful, humorous, and sometimes even complimentary.

Then there are comments that sometimes warrant a special mention because they describe something extraordinary or inspiring. I received one from Brian Canali the other day. He described how he spent an entire day doing hill repeats up famed Sierra Road in Milpitas, CA. As in 16 times. Sixteen!

Those who aren’t familiar with Sierra Rd. cannot truly appreciate this 3.7 mile climb, but I will say that it is one of the top three most difficult climbs of significant distance that I’ve done in my lifetime. It’s also been the marquee, hors-categorie climb in a few editions of the Tour of California. It gets its reputation mainly because of its steepness. Several sections exceed 15% in grade. The Excel plot on this page also shows how it is unrelenting.

This was Brian’s report on his remarkable feat:

At 100 miles I had done over 25,000 feet of climbing. The reason I went for 16 repeats is because I wanted to top the elevation of Mount Everest. It was hot in the upper 90’s in the late afternoon. I was alone all day but did the last climb with this rider from SJ Bike Club named James Thompson. It really helped to have someone to talk to on that last climb.

Actually, the descents were very tough toward the last few. My wrists and hands were killing me. I have carbon rims with cork pads and that made it tough.

In the future, I would love to read that someone topped my effort but I think it would really take a tough nut to do so.
Brian Canali

I agree with Brian about that—it would most certainly take a tough nut to even attempt to top his effort. Not living in the San Francisco Bay Area any more, I unfortunately (or maybe fortunately) cannot attempt this challenge. But in this day and age of crazy ultra-marathoners, there’s got to be someone loco enough to do it. Anyone?

It turns out there was a tough nut to go up and down Sierra Rd. more than 16 times in one day: Brian Canali himself. He went up 17 times, almost five years after the 16X record. Congrats, Brian!

Below is his brief report.

I just did the DMD two weeks ago so I figured I would give it a go because the weather was cool. My iPhone dropped the Strava at about 9 hours in because my battery went dead so it only got me doing the first 10 repeats. It’s a hard challenge but doable. Started at 5am and finished at 9pm. No breaks—just clothing changes and water bottle fills after each repeat.

This is an AMAZING feat which would be very hard to top. I especially like the fact that the total climbing surpasses Everest. IN A DAY!!!

Well done. A little crazy. But good to hear. ↩ Reply

I met Brian that day. My first trip to the top of Sierra and got a late start - spur of the moment as I was going up Piedmont, stopped at the light at Sierra Rd, looked up the hill and went for it. I passed Brian, saying "hey". He replied saying he was starting his 16th trip to the top that day. I thought "wow" and kept going. I was riding my 39/27 and about halfway up he caught me. We chatted the rest of the way up and I reached the top about the same time he did and got to share his excitement on reaching his goal that day. Amazing and maybe a bit insane!!! :) Turns out a few guys in my racing club either knows Brian or knows of him and his climbing skills. ↩ Reply