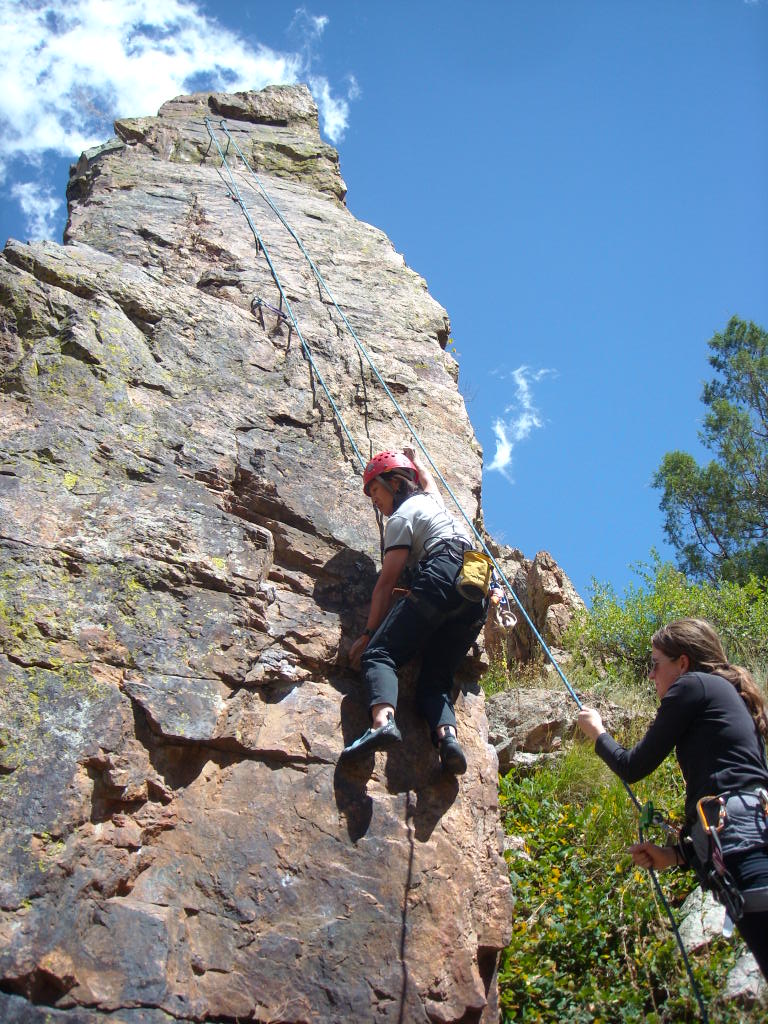 It was six years since I’ve last seen my friend Linda, but during that time I heard quite a few stories about her. Besides her adventures during a four-year stint in the not exactly the most stable country of Yemen, one legend that particularly stuck out in my mind was how she was river rafting in Africa one day with Tori. In perilous Class 4 rapids, she was thrown out of the raft and then fully submerged beneath the water, only to pop her head above the river surface to see the raft floating downstream 30 feet away.

So you have to excuse me for being taken a little aback when—while fording the Poudre River today to get to the rock climbing area of The Palace—she froze two-thirds of the way through the water and blurted, “I can’t do this.” But the thigh-deep Poudre did seem to be moving with the speed and strength of a Pittsburgh Steelers linebacker instead of a tiny-tot flag football player as in years past in September. It was also as cold as refrigerated yogurt. Truth be told, the river crossing truly sucked.

We all survived with our lives and electronic equipment still intact, but rock climbing did not start out any smoother. This is because I mistook another route for one that I intended to climb, and it wasn’t until halfway up and after taking a a couple lead falls that I determined, conclusively, “Okay, this is NOT a 5.9+!”

I flailed around for 15 more minutes, only to get psyched out by the amount of swing and drop were I to fall. Ultimately I decided to bail three-quarters up the climb, even though that meant having to leave behind a quickdraw (the first time I’ve had to do so in 10 years of climbing). Post-climb research revealed that the route was “It Is What It Is,” or a 5.11a/b.

We then moved 10 feet over to “Drawbridge” (5.9), which I lead after resting for about 30 minutes so that my arm muscles would stop burning. It was only 35 feet and fairly easy past the start, but it was a relief to get up it after the river-crossing adventure and the 5.11 failure. Linda and her friend Faith then followed.

For our final climb of the day we did “Sunday Paper” (5.9). I had followed Tori on this climb last year, but today I was responsible for leading it. I assured Linda and Faith that it was “nice” and “pretty easy,” but nevertheless I had to hang on the rope early on due to arm fatigue. Then, after getting past the low crux, I was astounded at how long the climb was. Certainly longer than I remembered. It required 12 quickdraws and it was a long time before I reached the top and Faith and Linda could ascend it too.

The day was not over, however, as we still had to cross back over the Poudre. While Linda and I deliberated about the best way to ford across, Faith took the most direct approach through belly-button deep water. Once she made it across, Linda said to me, “Okay, we are just going to have to GO—don’t stop!” Holding onto each other’s hand, we then plowed straight ahead and was across within 30 seconds.

With that the day’s adventure was complete, and Linda and Faith decided not to head immediately over to Estes Park to camp and climb some more as they had originally planned. Instead, Linda suggested we get some quesadillas at La Luz and root beer floats afterward.

We went to A&W for the latter. It was as cold as the Poudre River, but about three times more enjoyable.