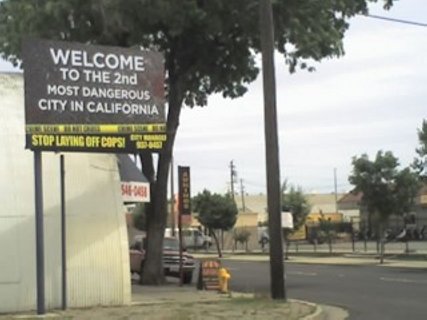 This weekend I will be heading to my childhood hometown of Stockton, CA. Why, you may ask. Is it for nostalgia, to remember those moments of innocent (and not-so-innocent) youth? To see what makes S-Town Forbes Magazine’s #1 Most Miserable City for the second time in three years? To visit friends and family?

The answer is yes to all the above, but also because a dear friend from high school is having a wedding there. We can’t wait to see her, and probably vice-versa. I just wonder if the rest of the city will be as inviting.

At least last year the Stockton police put out a nice welcome. See the photo on this page.

They even paid tens of thousands of dollars to erect these billboards. The reason? Surely, being “nice” must have be have been part of it, but it was also to make a point: that despite the city’s huge budget shortfall, Stockton cannot afford to lay off any more cops. You see, when police officers weren’t battling gangs, they had to battle city council, city council and public opinion for their jobs and paychecks.

Happily, after a whole year there was a resolution. Just a few weeks ago, the Stockton police ended their standoff with City Council. They took a 21% paycut in exchange for “guarantees the city won’t file for bankruptcy.”

No word if the billboards are still up. Probably not, though, as such nice “welcomes” could have put Stockton’s retention of its #1 Most Miserable crown in jeopardy for next year.

In any case, we’ll try to be careful while we’re out there.