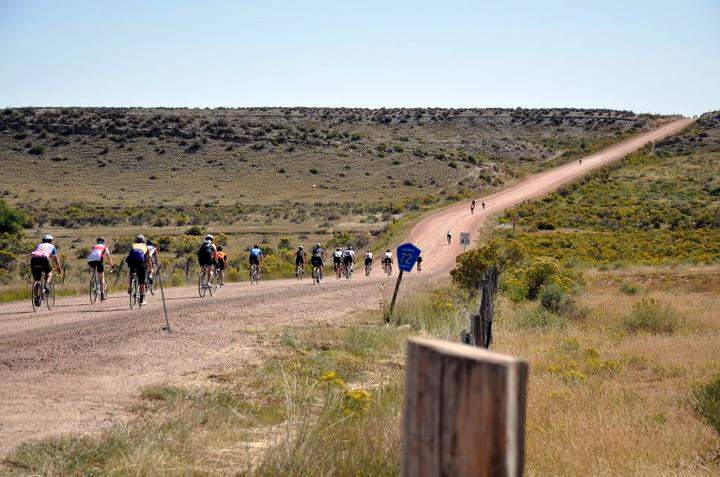 “Hey, wait a minute!” I said to my buddy Eddie, whose gorgeous celeste steel Bianchi road bike I had just complimented. “Those are clipless pedals; where are your toe clips and straps? And that’s an eight-speed cassette—they did not have that in 1988!

“You should be disqualified,” I concluded.

Fortunately this wasn’t a race, then. In fact, it was an inaugural fun ride for vintage bicycles on the hard-packed dirt roads north of Fort Collins, a tribute to the bygone steel-and-wool cycling days of yore and cycling legends such as Fausto Coppi, Bernard Hinault, the Eddy, etc. It also doubled as a fundraiser for the Cancer League of Colorado.

The official description by organizer Mark Dotson was as follows:

This is a L’Eroica styled ride done on bicycles with vintage technology. Bicycles have to be 1987 technology or earlier. This means downtube shifters, toe clips, non aero brake cables etc. You may use a newer frame etc.—as long as it is built up in the L’Eroica style.

Wool clothing is not required but encouraged.

Riders will embark in mass on a route that is a 24 mile loop on hardpack and of which less than 3 miles are paved. Although not a race, the ride will be challenging due to the various road surfaces. This will be a fun ride where everyone can enjoy the passion of old style riding. There will be rolling support and sag.

A beautiful treeline shaded location has been arranged for the riders for both the starting point and luncheon.

We will meet at Taft Hill Rd. and Owl Canyon Rd. (W. CO Rd 70). This location is where you’ll park and after the ride, we will have a classic mediterranean styled luncheon (included in the entry fee). Vintage cycling footage and music will also be provided.

Entry fees taken at the start of the ride are $15.00. Of this amount, ten dollars will go to the Cancer League of Colorado. Please take note of the corporate matching amounts to donations given on their website.

Let’s all meet together and ride in the style of Coppi, Robic and Bartali.

Good thing the 1987-and-prior rule was not strictly enforced, as Eddie and his aero brake levers would have otherwise been thrown under the bus. Despite his demerits I did give him points for wearing a genuine leather hairnet. I suppose his classic rainbow jersey was worth another point. Not that anyone was keeping track.

I rode my 1984 Gitane Criterium which, may I point out, was 100% within the rules. Most of the 30+ other bicycles and their componentry were older than 1987 too. These bicycles included several steel Treks (of Wisconsin, USA), a Motobecane and another Gitane (France), a Puch (Austria), a Tommassini (Italy), a Schwinn Tempo (Japan?), and many others I do not recall.

From the start, finish, and luncheon area—a gorgeous tree-lined ranch built by the founder of Waterpik and whose owner graciously allowed us to use the property as a staging area since the event was for charity—we rode along hard-packed dirt roads which occasionally rose and fell, but never too dramatically with lactic acid-inducing severity. Everyone seemed to enjoy taking it easy—at least for the first half of the ride while people were still getting accustomed to inserting their shoes into toe clips and straps and flicking shift levers on the downtubes of their bicycles instead of by the brake levers. During the entire tour, Mark’s daughters Annamieke and Maetra motorpaced and took photos on an olive green 1976 Vespa.

In the second half, however, a bunch of the riders decided to pick up the pace a notch or two or five—apparently no vintage bike ride would be complete without some injection of speed. I was caught practically napping at the back of the pack and it took a time trial effort at 25+ mph to get back to these rabbits. It wasn’t until about 15 minutes later when the group was slowed by a stop sign that I had regained contact.

My reunion with them was brief, however. With just a couple miles to go, my chain came off and soon I realized the problem was worse than simple chain drop—I had in fact lost a rear derailleur pulley. I dismounted the bike, walked back a good 400 meters, and was amazed to find first the bushing and then the plastic pulley lying in the middle of the road. I put them back in their proper place in the rear derailleur cage and merrily rode solo to the finish.

Awaiting at the luncheon area was a whole spread of sumptuous Italian food cooked up by Joany Dotson and daughters and served up family style. This included olives, sausage, bread and goat cheese, quiche, flavored olive oil (courtesy of the Rocky Mountain Olive Oil Company of Fort Collins, the only sponsor of the event) beer, wine, Pellegrino sparkling water, among other things I don’t quite remember. The food was absolutely sublime and, as I observed, “the best meal I’ve had in months.”

A toast was raised not just to the cycling legends of yesterday, but also to the veterans who had fought for this country. This day was, after all, the tenth anniversary of 9/11.

After the event, Trev Tyson remarked, “Mark, that was easily the single best ride/after party I’ve ever experienced. Thirty miles of hard pack and amazingly delicious food made by you wonderful women, a sun filled grove of old trees. One for the record books!”

I couldn’t have summed it up any better myself.

Renold Yip of YiPsan Bicycles participated in this ride and took moving photography with a handlebar-mounted camera. He did a nice job of compiling the following video. Enjoy!