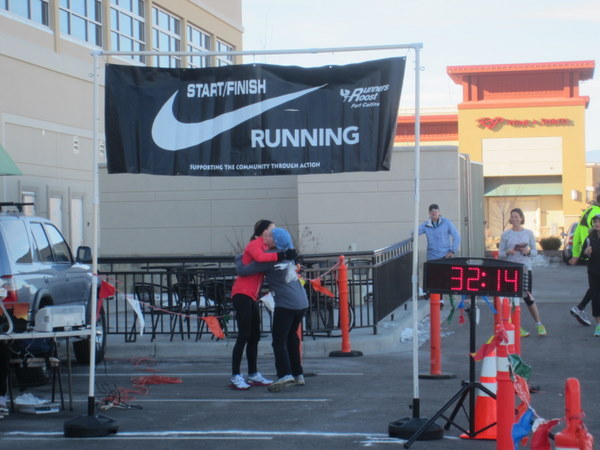 I enjoy doing athletic events on holidays so it is a little peculiar that the only race I’ve ever done for New Year’s was a five-kilometer run in San Diego seven whole years ago. And that one was on New Year’s Eve—not New Year’s Day—which had the advantage of not having to run after a night of counting down the new year and getting sloshed.

But Runners Roost’s New Year’s Day 5k was being held at ten o’clock in the morning—plenty of time to wake up, yes?—and the weather was supposed to be nice and sunny. The entry fee was a reasonable $15 and Kelly was interested in doing the race too. Hence, we entered on the premise that this was both a fun and healthy way to begin 2012.

Now if only I was in better running shape. I’ve run, oh, three or four times per month the last few months, and it was to be seen if that was enough to maintain my normal pace for 3.1 miles.

The first mile was pretty encouraging—a mile split of 6:20, and I felt like I was running fairly conservatively—but then enthusiasm got the best of me and I surged for about 20 seconds. Mistake! Not long after, I had to slow and from that point on the Garmin was giving depressing feedback such as my instantaneous pace was barely under seven minutes per mile.

In the last mile last mile I was passed up by no less than three women, and as much as I wanted to keep up, my breathing and stomach disallowed me from doing so. It was a relief just to pass the finish line, which I did at exactly 20.5 minutes. Meh. Well, going into the race, 20.5 minutes is exactly what I’d have expected.

After regaining my breath, I headed back on the course to cheer for Kelly. I didn’t have to wait too long since she ended up finishing with a personal record, about one minute quicker than her Warren Park 5k time from a couple months ago. Bravo!

Afterward we went back inside Runners Roost to hang out with the other runners. Everyone agreed it was indeed a nice way to start 2012. Happy New Year, all!