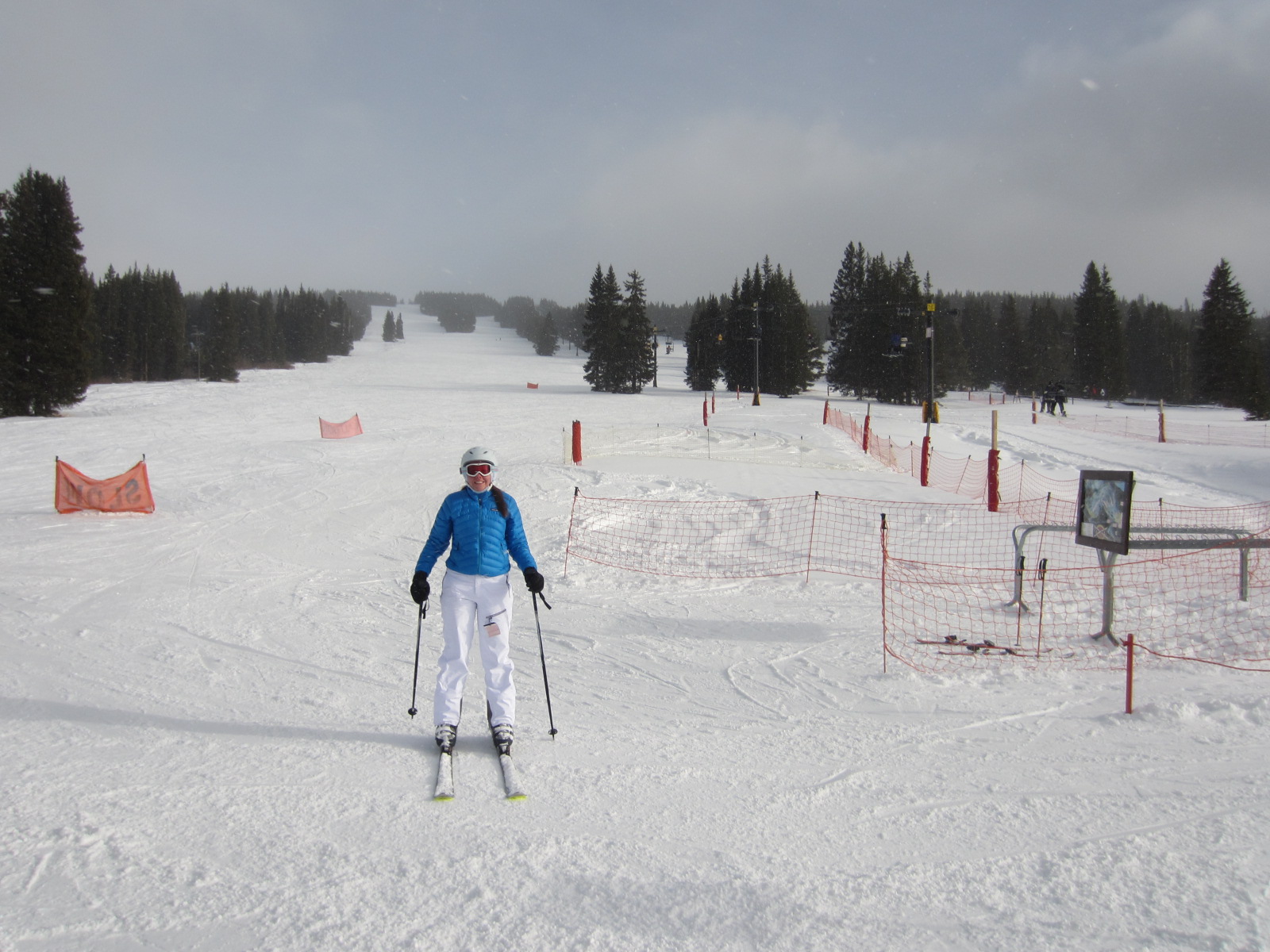 We were on the plane to California and somehow the topic of skiing came up. Maybe it was prompted by the sight of snow over the Western Slopes of Colorado, or that Kelly wished she had a ski pass for the winter. Whatever the case, I suddenly remembered something I had forgotten to tell her.

“Oh, I got us some ski tic’s for Ski Cooper,” I said. “They had a two-tickets-for-$40 special on Google Offers, good for any day in the next few months.” Twenty dollars for a day pass—this was an infinitely better deal than any blue light special at KMart!

Turns out Ski Cooper was nice in other ways. Parking was free and going from the parking lot to the lift did not require a super long hike. A basic ski rental package, including boots, skis, and poles, was only $15. (This was relevant to me because I sold my alpine touring skis 14 months ago.)

One downside of Ski Cooper was that it was a three-hour drive away—at least half-an-hour farther than other resorts in Summit County. But this meant there were less people crowding the slopes. Indeed, on this Friday, it was possible to go down some runs and risk crashing into only 0-5 people.

I haven’t skied in two years—and my ski skills never had surpassed a third grader’s—so I took it very easy on the first run. Or rather, very slowly; the low velocities still weren’t exactly “easy” for me as my quads started to fry like a potato halfway down due to being so tense!

They would loosen up a little. “You’re getting your ski legs back,” Kelly commented at one point as I somewhat convincingly weaved back and forth down the hill.

The rental skis—just 139 centimeters in length—were a great fit: much more maneuverable than the wider and heavier 174cm randonneur skis I had been using for the last four years. They confirmed what I had long suspected, that part of my turning challenges in the past—and the resultant terror—were at least partly because of my equipment. It was a hallelujah moment not to be handicapped today, using real downhill skis.

The snow conditions helped, too. All but the last two runs we did were well groomed with a fresh but not overly thick layer of snow padding the top. And the weather—breezeless with ample rays of sunshine radiating downward—was wonderful.

Before we broke for lunch, we had successfully decended four runs (four greens for me; three greens plus one blue for Speed Racer Kelly). By this time, I was comfortable with doing parallel S-turns, and after lunch we got in five more routes.

Before we called it a day I had not only done my first blue run in Colorado ever, but four! Kelly—who compared to me was a pro—also got to ski through the trees, ski over a log, and ski without poles, all while generally skiing circles around me.

This was definitely the most fun I’ve ever had skiing, and for the first time I actually look forward to sliding down a hill on two skinny planks without feeling apprehensive and inept. So the next time I buy ski tickets on sale, I probably will not be forgetting about them so soon.