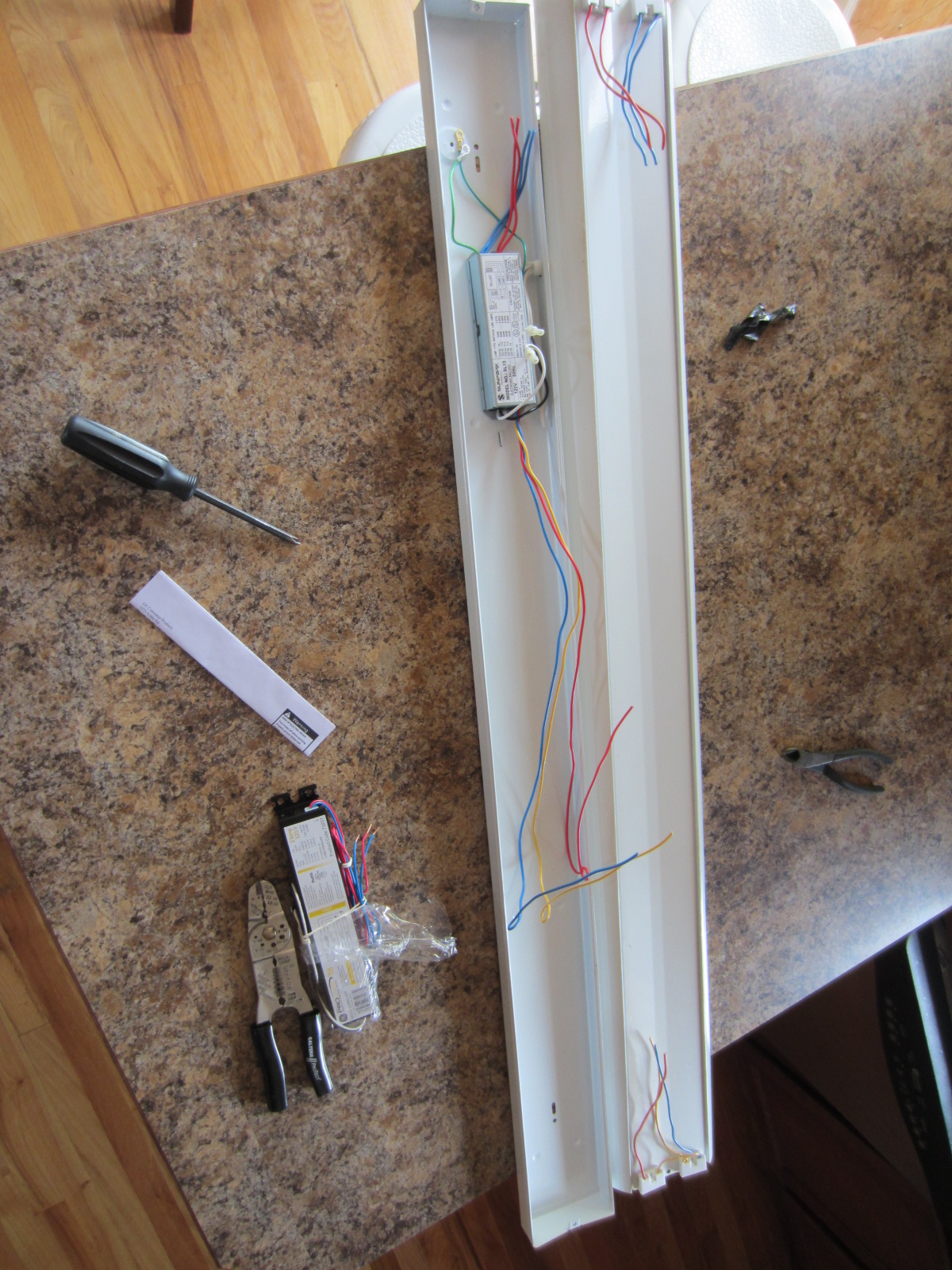 Off, dim and flicker. You’d have think that Lucas, the Prince of Darkness, and associated British engineers had designed the fluorescent lighting system in the Garage Mahal 2. For several months, only one out of the four fluorescent tubes in the garage would illuminate upon flicking a light switch on the wall, and sometimes it felt that doing any sort of work in the garage was working by candlelight.

After a bit of fiddling to ensure that the problem wasn’t mechanical in nature, I determined that the ballasts in the 10-year-old light fixtures were dying, faulty, kaput. So I went over to Home Depot to look for a new one. To my amazement there were almost no ballasts for T12 (1-1/2″) fluorescent tubes. A helpful Home Depot employee told me why.

“Did you know that T12 bulbs are being phased out by July of this year?” he asked. “It might be worth just converting your lights to T8 (1 inch diameter).”

This was certainly news to me. Whereas it wouldn’t surprise me if the über-inefficient Thomas Edison-style incandescent lights become outlawed soon, we are talking about ubiquitous T12 fluorescent tubes that at one time have graced virtually every office and warehouse. (An aside: apparently, some U.S. states are phasing incandescent light bulbs by the end of this decade, and many countries around the world already have.)

As it turns out, despite being 50% larger in diameter than T8 bulbs, the T12 bulbs put out less light than T8 ones of similar wattage. Upon researching the matter further, I also learned the following:

In light of the above, I decided to retrofit my existing light fixtures with T8 ballasts and bulbs.

The result was quite nice, though. Now there is plenty of light in the garage, and a whiter glow too. In addition to the energy savings, there is less noise: the old T12 ballasts hummed a lot louder than the new T8 electronic ones.

According to Adventure Lighting Blog, there is more than just a 20% reduction in energy (=1 – 32W/40W). The savings, no doubt due in part to the more efficient electronic ballasts, is actually 35%:

A standard 4 lamp fixture, similar to what most every office in America uses, has a standard 40 watt T12 lamp on a standard magnetic ballast (which won’t be produced after June of 2010) and uses 172 watts of energy. The same fixture retrofitted with T8 lamps and a new electronic ballast uses 112 watts of energy—that’s a 35% reduction in energy usage!

You can see that the T12 lamp loses 14% of its light output over the first 40% of its life, whereas the T8 only loses 5% of its light output. Combine that over 4 lamps and you have a loss of 1,400 lumens per fixture as compared to 560 lumens lost on a T8 fixture. I’ll get into why the T8 lamp is a better lamp as far as color later—but the 35% energy savings and a better lumen maintenance are 2 of the reasons why switching is better.

The T8 lamp will also have an extra 4,000 hours of average rated life on a 3 hour start cycle.