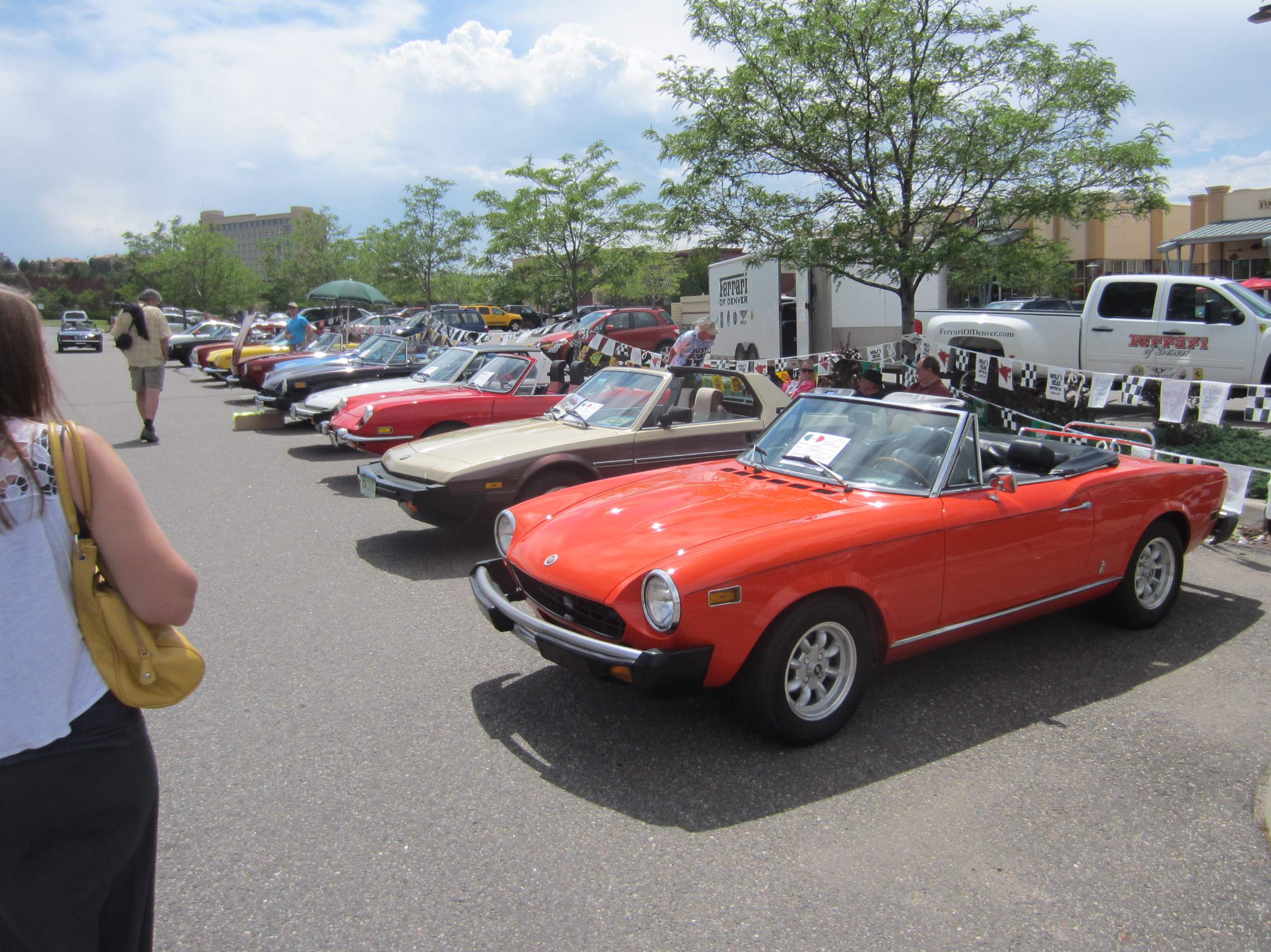 “There they are,” I said to Kelly as we walked into the Automezzi Italian car extravaganza in Broomfield, Colorado. “Fix It Again, Tony.”

The FIATs, I meant. But I meant no malice by refering to their half-deserved reputation for sketchy reliability. I actually have a soft spot in my heart for these cars.

Particularly the Pininfarina-designed Fiat Spider (both the 124 and later-model 2000 sold in 1979-80). I remember being driven home by my mom from high school and looking out the window of her rolly-bowly four-door Oldsmobile Cutlass Supreme each day admiring a beige Fiat Spider 2000 in the neighborhood. It was always parked in a tree-lined driveway next to the house of the man who founded California Cooler, the alcoholic beverage. I was more obsessed with the idea of a traditional two-seat British roadster such as the MGB, but the thoroughly more modern Italian sports car equivalents also registered on my radar back then. Maybe this is because they also like to mark their spot with black dino juice and have some of the only electrical systems that could rival those made by Lucas, Prince of Darkness.

Roughly 15 years after that time I finally owned a Pininfarina-designed car that parla italiano. But it was in the form of a later model (even airbag-equipped!) Alfa Romeo Spider Veloce, not the more plebeian—but just as dashing—FIAT variety. Hmmmm.

Meanwhile, Kelly seemed more intrigued by the Lamborghinis Gallardos that were already motoring out of Automezzi. We had arrived at the event rather late, you see—so tardy that even the normal $7 admission fee was being waived and donations were being accepted instead.

“My favorite car of the show,” she later proclaimed, “was the white Lamborghini Gallardo.” No argument there.

Except that—being forever an al fresco type of guy—I’d have chosen the Spyder version:

But there were plenty of other machines remaining to admire: Alfas, DeTomasos, Ferraris, Maseratis, among others. I also loved the two-wheeled ilk: particularly, the Ducati 1199 Paningale and Ducati Streetfighter. Versus, say, the Lamborghinis, these dream machines are a lot more attainable—and just as quick.

(An aside: Both the Lambos and Ducs are made by companies now owned by Audi. More reason the German company better known for its elegant design and super high quality interiors is one of my current faves.)

A few non-Italian cars were present, cast away to the back of the parking lot. This included this Porsche 911 GT3 from the early 2000s:

Both Kelly and I emerged from the show feeling energized and thinking classic machines. So while I was happy to drive us home in my Audi TT (“Teeter is looking really good,” I said after seeing the German roadster back in the parking lot), in the back of my mind, I wondered if it was time for a chrome-bumpered roadster to keep her company in the garage.

Later that night I’d notice that Fiat Spiders can be easily obtained for a mere $2500-4000 nowadays. They could use a little bit of work (what vintage Italian car doesn’t?) but would be absolutely driveable—or so the Craigslist ads say. Hmmmm….