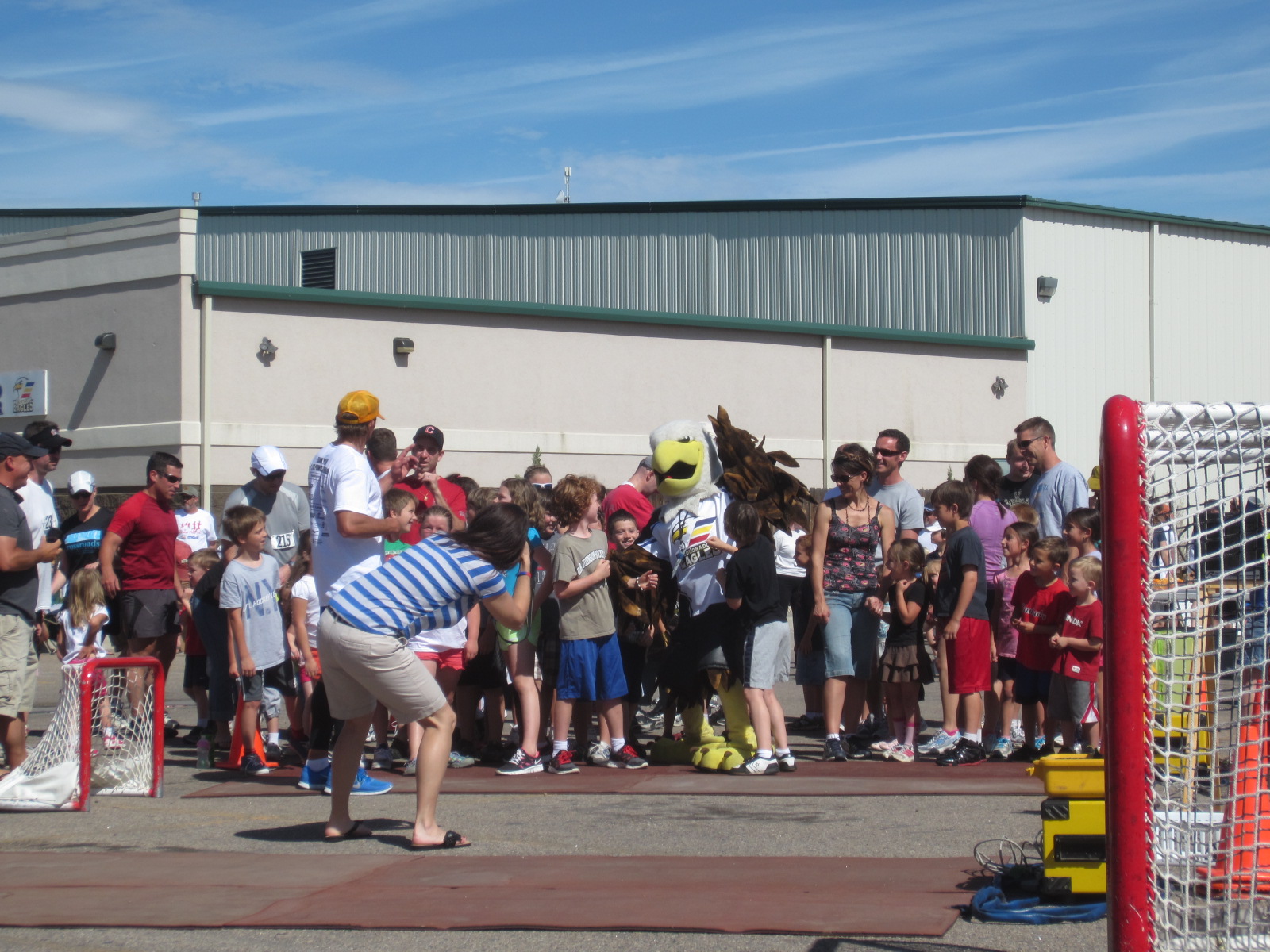 Never mind that it was just two months ago that I ran my slowest 5k race ever. Or that the main reason I signed up for this race—the NCYH Power Play 5k, benefitting Northern Colorado Youth Hockey—was because there was a Living Social deal where entry was a bargain $12 instead of $25. I had started to run daily since Memorial Day and my speed was getting sharpened by Jane Wetzel’s Tuesday Night Track workouts at CSU beginning in mid-May.

So when I arrived at the race venue in Windsor my legs were feeling more Road Runner-ish than they had in half a year. I warmed up by jogging the first half-mile of the course and, aside from a few kids, was the only one who dared to inch up right to the start line as the race was getting way. There was potential for a good race result today, I knew.

As I had expected, the middle school students who took off like Usain Bolt quickly faded within the first 400 meters. From the warmup I knew the first mile was uphill, so I chugged along conservatively and allowed a couple other guys gradually pass me. Another man in a red singlet then whizzed by all of us, and I knew there was no way I’d be able to keep up with him. I’d concentrate on finishing Top 5, I thought.

I upped my goal to Top 3 when, after the first mile, two of the three runners in front were just 15 and 5 seconds ahead of me. I could tell the dude immediately ahead was breathing much harder than I, so I decided to let it rip on the downhill and trotted by him. Another quarter-mile later I passed the other guy, so now I was in second place.

As I got closer to the turnaround cone, Red Singlet came into view, and I muttered “good job” to him as he passed me going the other direction. He had enough of a gap that I knew I was not going to catch him. But an interesting thing happened on the return trip.

A woman on a bicycle who was out there to pace the lead runner drifted back to me and started riding by my side. After a minute or two of this she then asked a question which was most encouraging.

“You know that the guy up there is not in the race, right”?

“REALLY?” was all I could reply. It turned out he was out there as a jackrabbit, a speedster for the actual race participants to chase. I was chugging up another uphill and was concentrating on maintaining my rhythm without blowing up to think too deeply about that, but the implication was: I was leading the race, and it was now my race to lose.

The hill was not super steep but was fairly long. Because the race was out-and-back, I knew what remained of the course and that it would end on a downhill. If I could crest the final ascent with the lead intact, I stood a good chance of maintaining the lead particularly because my descending skills on pavement have always been decent as I expend almost zero energy resisting gravity.

But the hill had taken a toll on my breathing, and I had to maintain focus on not slowing up all while trying to stay relaxed enough as to not crumble under the pressure of being the frontrunner. Ultimately, I thought of Kelly who, in the last Tortoise & Hare race, nearly killed herself to cross the finish line first and nudge her way into the top final series standings.

Thus I resolved, “I really want to win a race this year too,” and with one quick glance over my shoulder as I rounded the final bend just to confirm the second place guy was not right on my heels, I kicked it into high gear and sprinted across the finish line making a Tiger Woods fist of victory.

Final time: 20:56. Definitely a not a world-beating 5k time by any measure, but the course was long (3.2 miles instead of 3.1), there were hills, and the heat registered in the high 70s or low 80s. I’ll take the win—the most exciting one I’ve had since the Davy Crockett Bear Chase Marathon.

It was especially heart-warming considering my awful result from the last 5k, and that I was almost in tears after the first Tuesday Night Track when I felt so out of shape and barely managed to even finish the workout. What a difference a few weeks makes.

At least you got your award. The race organizers f'd up and gave mine to someone else because I had to leave before the award ceremony. I was 1st in my age class. ↩ Reply