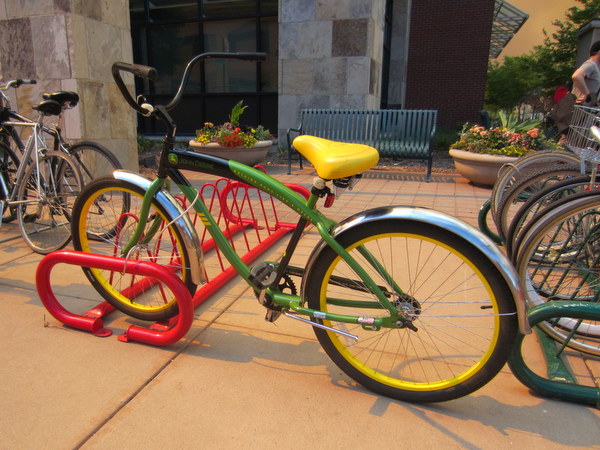 I was sitting in my car just outside of a coffee shop at Front Range Village in the south part of Fort Collins when an egg-shaped vehicle flickered by in the corner of my eye. It made hardly any more noise than an eggbeater and was almost hovering along like a mini UFO. I didn’t see any space creatures inside but I did manage to snap a photo of it. Here it is:

This was just one of the two-wheeled contraptions that have piqued my interest in the last couple weeks in this bike-crazy town. There especially seems to be a high concentration of interesting pedal-powered machines down in Old Town.

For example, check out this bicycle made of bamboo:

While Fort Collins is home to both Panda Bicycles and Boo Bicycles—two manufacturers of bicis made from the sustainable hollow wood tube resource—this one appeared to be rather amateurish like it was epoxied in someone’s garage. Yet is appeared to be fully functional with stem-mounted shifters, a double chainring and rear derailleur.

In contrast, the speedster below (also seen in Old Town—just a few feet away from the bamboo bicycle, in fact) is a single-speed with a very modern-looking, welded-aluminum time trial frame. The factory paint could make leopards in Africa drool with lust.

A couple blocks away from that bike was this green-and-yellow bicycle that was parked just outside the Taste of Fort Collins. It was officially licensed by America’s leading manufacturer of tractors, riding lawn mowers, and other agricultural equipment. Yes, John Deere.

“The next bicycle I get will most likely be a cruiser,” I told Tim a couple times over the last week. I sure wouldn’t mind a cruiser like this one!