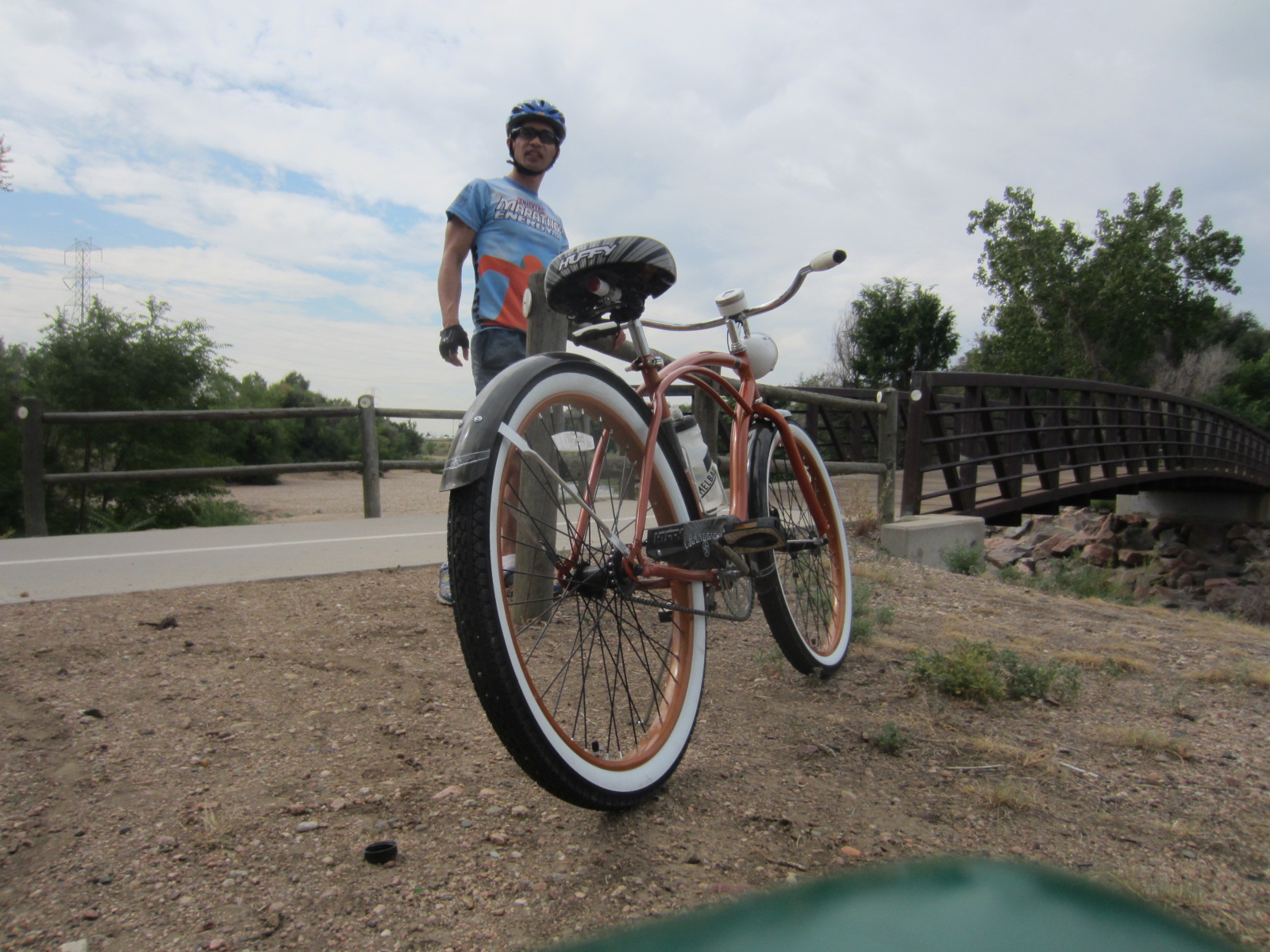 I was in an obsessive bicycle cruiser phase when I decided to order a brand new Huffy Cranbrook for the whopping sum of $88, which included free shipping. Just one issue though: every single vehicle gracing my garage (including five bicycles) up to that point had done some sort of epic journey which for simplicity’s sake, I’ll define as a trip spanning at least two hundred miles in a day. The Huffy, then, would have to earn its spot in garage.

The Huffy had not even arrived at my doorstep before I was planning a grand adventure for it. Colorado Springs seemed a natural destination for it since my friends Lisa and Jeremiah lived down there. I figured, maybe I could combine the ride with a visit to them and maybe join in some sort of late evening cruiser ride that is en vogue in hip cities such as Portland or Fort Collins.

That’s when Kelly gave me some bad news. “I really don’t think a Huffy could make it to Colorado Springs from Fort Collins,” said the Specialized bicycle representative and founder of Bicycle Trunk Locks.

“Really?” I replied. The thought of it not being able to actually did not even cross my mind. It had two wheels, tires, pedals, and was going to be brand spanking new, for heaven’s sake. Why wouldn’t it be able to make it?

After a moment’s pondering, I concluded that the journey simply wasn’t about the bike. “Sure it may be heavy, but it’s more about the engine,” I replied. “For example, if Lance Armstrong was riding it, he still probably would beat me to Colorado Springs even if I was pedaling one of my road bikes.”

Kelly remained unconvinced. Which to me simply spelled challenge! Now I was really psyched for this ride, if only to prove that it could be done.

A few hiccups in planning

As I looked more into the matter, the more I started to regret my bout of verbal machismo.

For one thing, there was the matter of the route. Driving to Jeremiah and Lisa’s house in Colorado Springs entails a mere 120, maybe 130, miles that are mostly on the highway, but bicycles are disallowed on Interstate 25. I then plotted out the shortest route possible using gmap-pedometer.com, but the distance turned out to be closer to 145-150 miles. To ride down to Colorado Springs and back would entail about 300 miles of riding. I was initially thinking it would be 250 miles, which already would have been a tall order.

Then there was the bicycle itself. Despite my defense of a bicycle in which in its entirety cost less than, oh, the tires or saddle of any one of my other bikes, I couldn’t even make it around the neighborhood in any of my test rides because the tires kept unseating. This resulted in the tubes escaping out of the tire carcasses and bursting. Spontaneously exploding tires are not a good thing.

When I envisioned the ride I also figured I could swap out the pedals for any of the clipless pedals from my other bicycles. This would allow me to pull up and back on the pedals, using the hamstrings, instead of simply stomping down. But the Huffy pedal axles turned out to be spindlier than the clipless pedals. Short of rigging, say, toe clips and straps to the plastic Huffy pedals, I would have to use them as is with mechanically inefficient street shoes.

By the launch date I did “solve” the exploding tire issue by purchasing some slightly tighter-fitting, Chenh Shin cruiser tires on Amazon.com for $12.99 each—which effectively increased the cost of the bicycle 30% or so. (Note: I later learned that with cruiser tires, you must make sure the tire sidewalls “hook” onto the sides of the rim while you inflate the tires—even if you have to do such seating by hand. Doing so should have allowed me to inflate the stock tires up to 45-55 PSI without explosion.) I also mounted homemade head- and taillights from parts acquired at Home Depot, Harbor Freight, and a housing material recycling center. Never mind that such pimping increased the weight of the bicycle by another three or four pounds. The bicycle now weighed 40 pounds.

By the time I was to embark on the Fort Collins to Colorado Springs adventure, I had logged only a whopping 3.1 miles due to the aforementioned issues. Never mind that; the newly dubbed Huffster was a go!

Below are notes that I never fleshed out into a full write-up.

This turned out to be one of my fondest adventures. Despite the mechanical issues, the bike was supremely comfortable with its fat, springy seat and upright position. The bicycle even garnered compliments like “cool bike!” by several people along the way. Its humble Huffy origins, in addition being only one-speed and weighing as much as a boat anchor, only added to its mystique.

More than one person afterward asked me if this was some sort of world record for a Huffy. Maybe one day I will contact the company to see.

I did conclude one more thing from the ride, however. Lance Armstrong would not have beat me to Colorado Springs if he was riding the Huffster and I was riding one of my other bikes. Not even doping would have given him a chance.

The route (at least the intended one. I got lost quite a few times and added on at least six miles on the way to Colorado Springs.)

Lol... Yup. Slime bro. Thinking of doing a trip from texas to colorado on a cranbrook. Doable? ↩ Reply

Yes, I believe it is! That would be an awesome trip! ↩ Reply

In 2013, at age 67, I rode my 2003 FrankenHuffyTrailKroozer across Missouri on the Katy Trail Ride. I did not approach your daily mileage, after 5 days I had logged 268, I did make a few concessions to modernity, adding alloy seat post, stem, handlebars, and crankset with a cartridge bottom bracket adapter, and did use SPD pedals. Since building it in 2009 I have logged almost 5,800 miles on it, while accumulating another 25,000 on my other bikes. ↩ Reply

Forgot to mention the alloy rims and V-brakes front and rear. ↩ Reply

Hi Michael! Thanks for stopping by my blog and for your comment. It is great to hear from a fellow Huffy cruiser enthusiast! That?s so great you rode your 2003 FrankenHuffyTrailKroozer across Missouri. I am even familiar with the stretch of the Katy Trail near St. Louis, as I?ve biked and ran on it while visiting my girlfriend out there.

Good to know it is possible to upgrade the bottom bracket (and hence crankset and pedals) with more modern stuff! I?m still using the OEM bottom bracket with ball bearing races and flat pedals that use a different spindle size than SPDs and other modern pedals. ↩ Reply