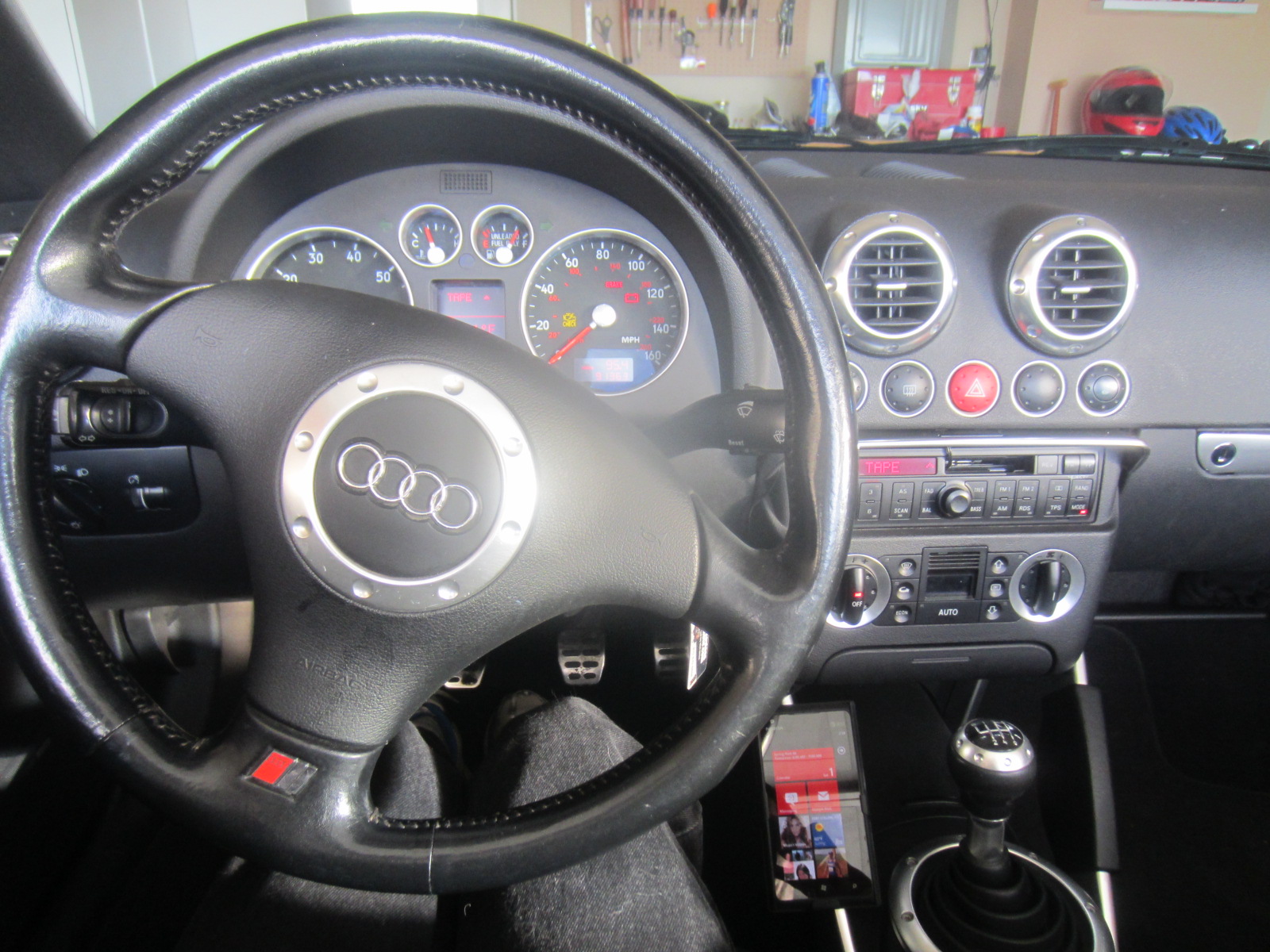 Author’s note on September 3, 2015: I have come come across an even better way to mount a smartphone inside the TT. See this article instead.

During the last half-decade, it seems like automobile manufacturers have made leaps and bounds on equipping the latest gee-whiz electronics in even the most plebeian of automobiles. Even the most affordable model lines—such as the Ford Fiesta—can be equipped with a touchscreen navigation system nowadays that is vastly more intuitive and useful than that of my 1st Generation Audi TT, and many even have USB ports that you can plug in a jump drive with MP3 files.

The good thing is today’s smart phones can provide all of this functionality in older vehicles. And with the arrival of my new Nokia 900 Windows Phone back in October, the first thing I wanted to do was interface the phone with Teeter’s sound system. Here’s how I did it.

The most immediate issue was figuring out how to pipe audio from the phone to the stereo. One solution would be something like what I got for Kelly earlier in the year, which was a GOgroove FlexSMART 4i Car Mount for Apple iPhone that plugged into the cigarette lighter while propping up the phone, charging it, and feeding an audio signal via FM radio waves.

But the Audi’s cigarette lighter requires propping open the ashtray drawer for access. Also, Kelly’s device was starting to not work properly (e.g., buttons on it to select different radio frequencies malfunctioned), not giving me high confidence in its reliability. Fidelity would be also lost as the audio frequency range produced by an FM radio are even more narrow than that produced by a cassette.

The highest-fidelity solution would have been to splice in an “audio in” line by splicing the stereo unit’s CD changer input wires and rigging a DPDT switch (as described by these instructions), or install an aftermarket adapter that plugged into the head unit’s CD changer input jack (e.g., GROM). But both of these would have required a couple hours of labor, minimum, and in the case of the latter, a GROM adapter costs upward of $100 and disallows usage of the CD changer. For the former, splicing harness wires can be delicate is not for the faint of heart.

My simple solution was to purchase a cassette adapter. I purchased one made by Phillips, which got good reviews on Amazon. (Word has it your local Walmart also carries the same adapter.) Not only did it cost under $10, but the audio quality is so surprisingly good that I can’t tell a difference between the sound through that versus the CD changer—especially when driving along and tire and wind noise permeates the cabin. (In theory, the cassette adapter’s frequency range is about 30-18k Hz which is better than an FM transmitter’s range of 30-15k HZ, according to Crutchfield.)

It also can be installed fairly inconspicuously in an Audi TT, since wires can be routed within the gap for the stereo cover above the head unit, as shown below. And might as well use that tape deck for something!

Next was installing some sort of mount for the smart phone. I ended up purchasing a $10 belt clip holster for my Nokia 900 off Amazon, and then attached it to the left Audi TT center stack bracket (after removal of the knee bolster pad) with double sided tape and zip ties:

I did have to grind away part of the right “arm” of the holster since it was blocking the phone’s power button—but that was a two-minute job with a Dremel.

I think it ended up looking pretty slick. Plus, the total cost of the above was less than $20, and in the 1.5 months I have used it so far, it has proven to be supremely reliable.

I also like the position of where I mounted the phone. The touchscreen easily reachable without squirming and stretching, and stays is not obscured by either the steering wheel or the gear shift. The ashtray drawer (to access the cigarette lighter to the rare instance I need to plug in a cable to charge the phone) can also still be opened with zero interference.

The downside is that in order to make a hands-free call, I would have to unplug the 2.5mm audio jack from the phone and activate the speakerphone. (This is because the phone’s built-in microphone won’t work with something plugged into the headphone jack. An iPhone is like this as well.)

Here are a couple solutions other Audi TT owners came up with to mount their phones and feed in an external audio source to the stock head unit. But I prefer my method for the reasons listed below.