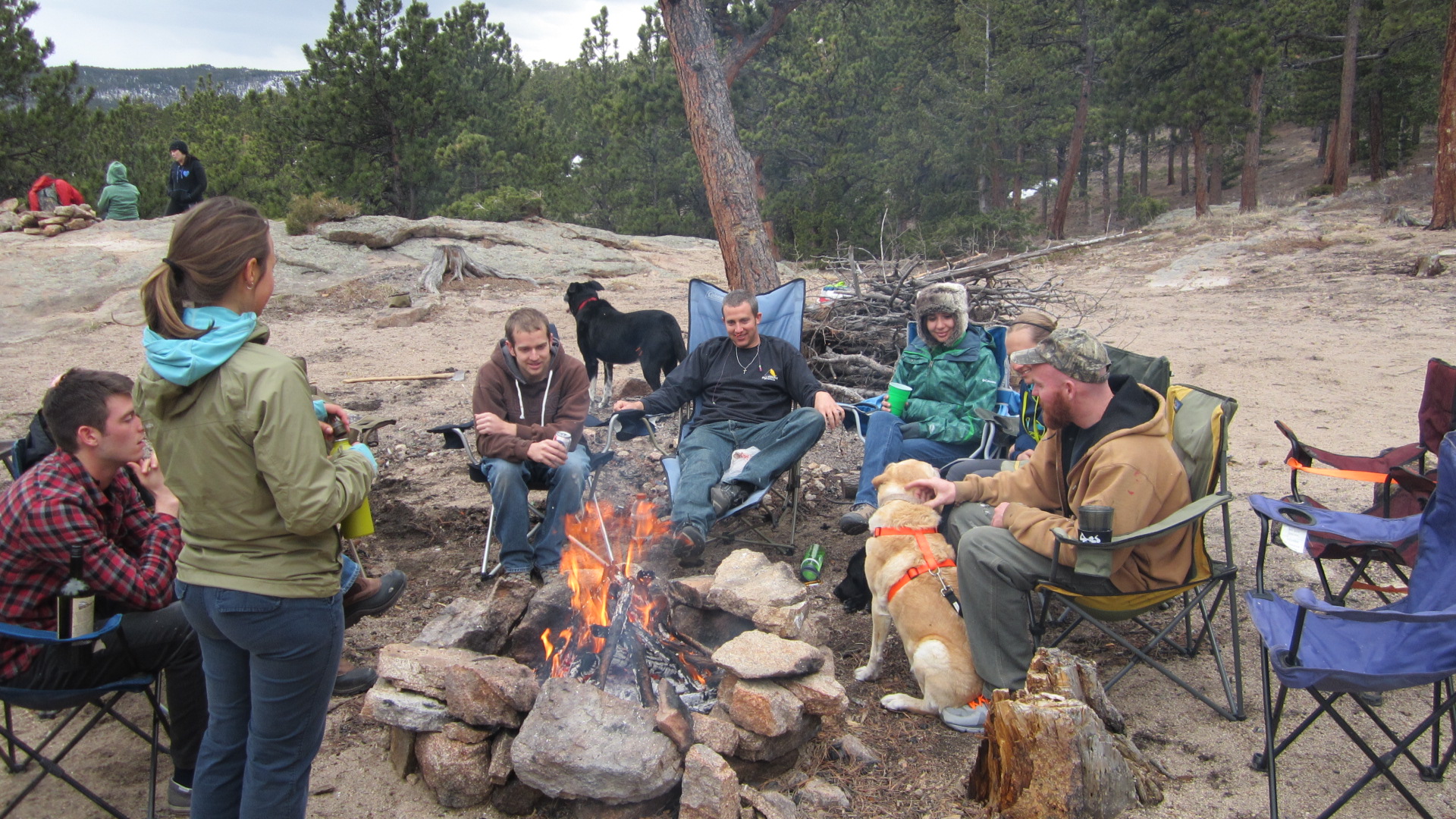 “Thinking about going camping this weekend before the fire bans,” wrote Krista. Considering the devastating wildfires last year and the cinder-dry conditions this year up to this date, her idea seemed like a smart ones. After all, camping is never quite the same without a campfire.

So I drove up to Allenspark, CO—a super small town off the Peak to Peak Highway between Boulder and Estes Park—with Katia to Bunce School Rd., the designated rendezvous point for meeting up with all the others. In addition to Krista and Katia, there were our friends Danielle, Diana and Kyle, along with a bunch of long-time friends of Nate, Krista’s significant other. And lots of four-legged creatures of the barking variety. Krista brought Oso (“bear” in Spanish) and most of Nate’s friends had large doggies too.

The night included having dinner around the campfire (Katia and I had Maruchan cup-of-noodles whereas the others brought slightly more elaborate grub), sharing a few canned jokes (most of us did not have any), hiking after dinner before it got completely dark, and roasting marshmallows and making s’mores. Diana was soon proclaimed the marshmallow-roasting professional and our sweet tooths were satisfied long until midnight, when most of us retired to the tents.

At 3 a.m. Katia climbed out of my now 15-year-old-but-trusty Sierra Designs Clip Flashlight CD 2-person tent. At first I thought she was just going to water a tree, but after she didn’t return 45 minutes later, I decided I’d better look for her to make sure she was not lost. When I climbed out of the tent I was astonished to see there was two inches of snow on the ground! It didn’t seem to be snowing hard but clearly it had accumulated quickly in just a couple hours.

I wandered around for about ten minutes (accidentally waking up Oso in Krista’s tent 200 feet away) and found Katia dumping wood on the campfire. Apparently the large 0-degree, North Face sleeping bag I rented from local outfitter Jax was inadequate in these 35-degree temperatures. We ended up hanging around the flames well into the early morning—late enough to see the sun rise—before taking a snooze once again.

You can bet that we were both thankful no fire bans had been implemented yet.