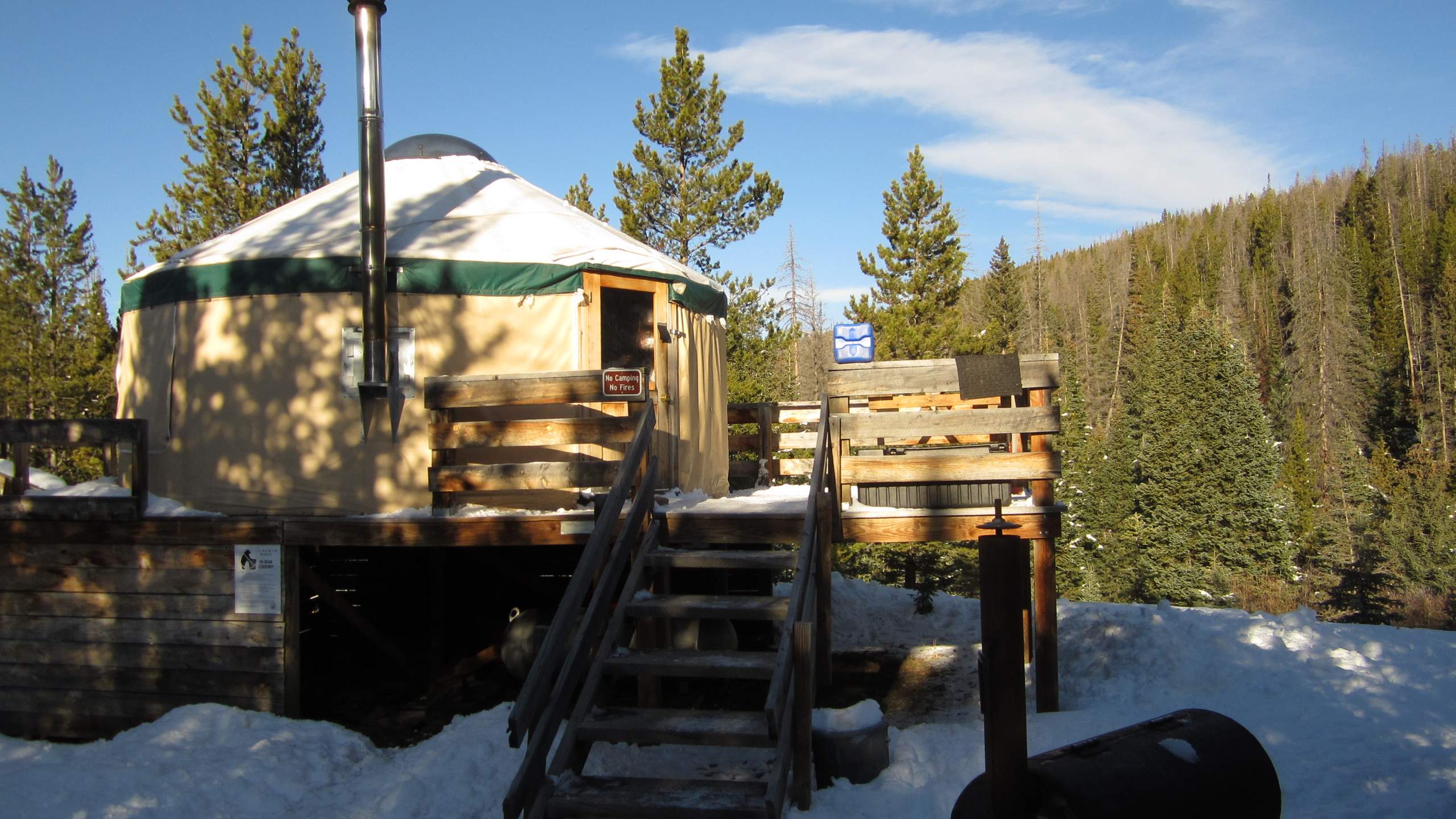 My enthusiasm for Diana’s 30th birthday adventure was bursting at the seams.

“So psyched for this! Your b-day! A yurt! And in Walden! Time to bust out more Henry David Thoreau quotes (even if it is the wrong Walden).”

Turns out the Clark Peak Yurt was 30 miles east of Walden; even better as it was less of a drive. There would be eight of us; ten if you include two rambunctious doggies.

Diana, Jesse, Nate D. and I got a late start on the road, and I was texting Krista about such when I looked over to the next lane on Highway 287 and there was her, Nate C. and the dogs in their Jeep. We then caravanned through the Poudre Canyon on Highway 14 as we marveled over how great the weather was looking.

“I could have ridden my motorcycle,” said Nate D.

Good thing he didn’t, as after we crested Cameron Pass the roads greeted the vehicle with slush and ice. County Road 41 in Gould (coincidentally, the same turnoff as the KOA where I made an emergency overnight stop during July’s Fort Collins-Walden 200 recumbent adventure) was hairier, causing the tires of Diana’s little Hyundai to slip and slide like ice skates as she white-knuckle death gripped the steering wheel at the ten and two o’clock positions for five miles. Eventually we found the trailhead parking lot, which had a sign saying “Ruby Jewel Rd.”

Four of us (and the dogs) hiked two miles through the wintry forest as Krista’s Jeep blazed the trail on a snow-covered forest road, nearly getting stuck a couple times only to be rescued by its own four wheel drive. When we got to the yurt we got down to business: clear the deck of multiple feet of snow, turn on the propane tanks, start a fire in the very effective wood fireplace, and chop some firewood. The yurt was actually stocked with wood but Jesse (and then Nate) did the latter with alacrity, finding a dead tree in the forest to butcher with an axe.

Then it was lunch and waiting for Victoria and Jordan to arrive. We met Victoria back down at the trailhead a couple hours before dusk. Jordan, driving from Denver and making a liquor store stop on the way over, had more of an adventure getting over to the yurt. Apparently, she had found the parking lot without issue but then proceeded to walk 1.5 miles, alone, on the wrong road, and ended up being picked up by a couple of hunters who kindly brought her back to the parking lot. She was about to commence the two-mile hike up to the yurt in pitch darkness when Nate C.—who went to look for her with flashlight—found her. Kudos to Jordan for making the longest trek of all of us and not throwing in the towel.

Meanwhile, I was cooking dinner for everyone in the yurt: beef and vegetable soup; salad with romaine lettuce, spinach, tomatoes, mushrooms, red onions and feta cheese; and a chicken, bell pepper, and garlic stir fry, half of which was immersed in a creamy chicken sauce, the other half served unadorned for the gluten- and lactose-intolerant folks among us. This is definitely the greatest amount of real food I brought on a camping trip. It was a hearty meal, especially for being deep in the woods.

After dinner we roasted marshmallows and made s’mores. Diana, usually our bona-fide marshmallow roasting expert, began the job but by that time was a bit too inebriated to prevent marshmallow incineration, so I relieved the birthday girl of this duty.

Then, in the ample empty floorspace of the yurt surrounded by three bunk beds, Jordan—a yoga instructor—started doing yoga poses and handstands for us. The latter resulted in a leg-bruising accident as the door she was counting on support wasn’t latched, and by bedtime Jordan was asking for analgesics. Still, this didn’t discourage the rest of us from trying to contort our bodies into crow pose, or do pull-ups on the bunk beds!

In the morning, Krista and Nate made us one of the most delicious breakfasts I’ve had in a while: warmed corn tortillas with egg, bacon, avocado, salsa, onion and jalapeños. Yum. Check-out time from the yurt was 11:00 a.m., which gave us ample time to enjoy hot chocolate and enjoy the brisk-but-sunny morning—especially since Colorado time had “fallen back” an hour during the night.

The yurt trip was a wonderful way to memorialize Diana’s transition into her 30s, a decade she was looking forward to since, to paraphrase, “one’s 20s is a time of constant change and trying to figure out what to do, whereas in one’s 30s there is less confusion and having one’s sh*t together.” Succinctly put and largely true—for most of us, anyway.

I have yet to find a quote by Henry David Thoreau that says the same, but in any case, I reckon he would have supported the idea of celebrating one’s 30th in the woods.

That sounds like a blast!! I've been on Ruby Jewel Rd 4 wheeling in the summer and have seen yurts there. Maybe I saw the one you stayed in. Glad you had fun!! ↩Reply

Really, Raquel? I didn't know that you've gone 4-wheeling before! Take me, take me! :) ↩Reply

Oh, we should go! We could rent a 4 wheeler or a jeep! ↩Reply

Definitely something to put on our list for 2014, Quel! ↩Reply