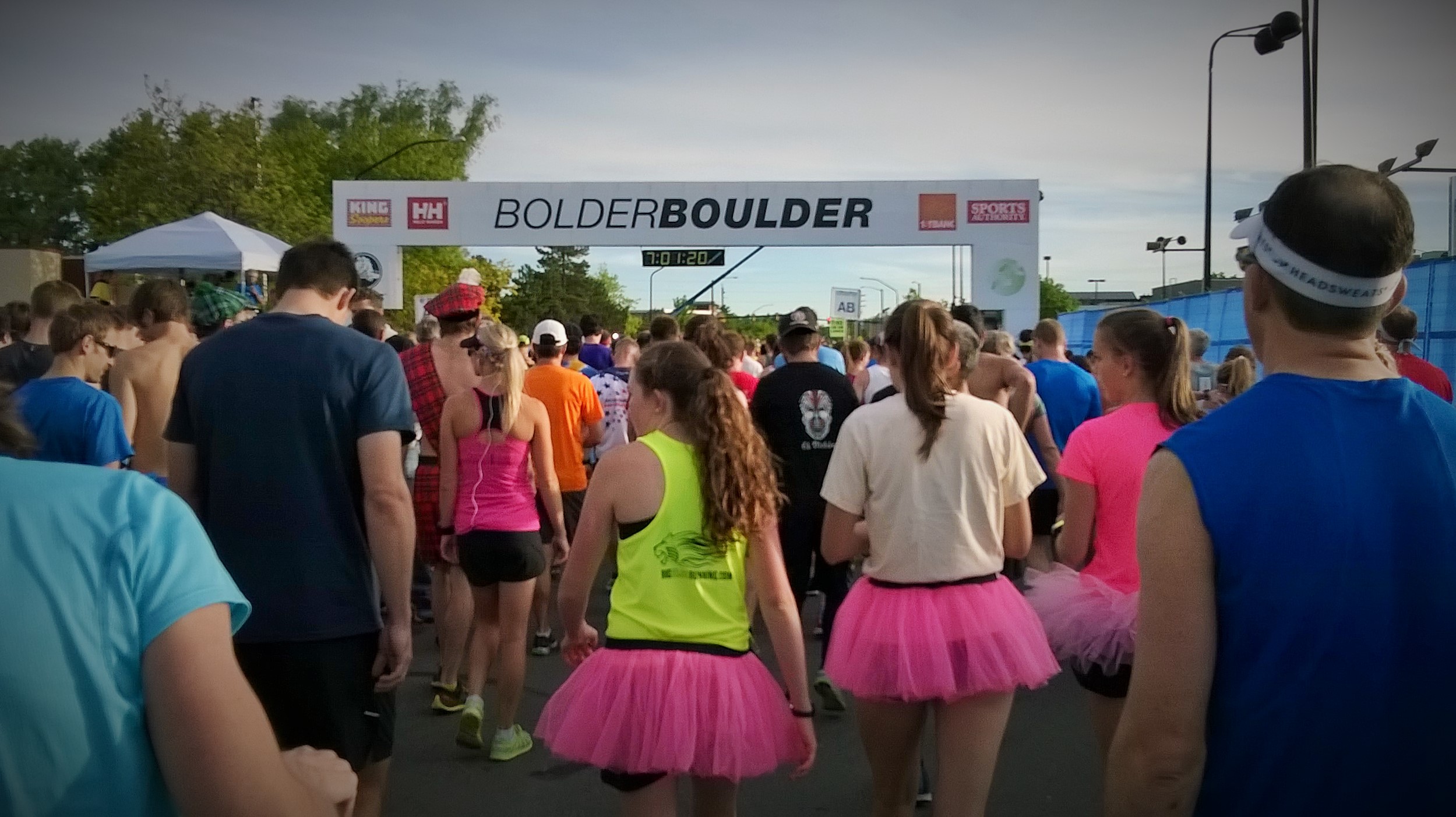 If my series of running races this year was a football game, then I was just trying to get points on the board.

I didn’t envision it would be like this when I signed up several months ago. There were lots of reasons to do it: a bunch of friends where doing it; I had never done this fabled race (largest timed footrace in the U.S. with 54,000 runners) despite living in northern Colorado for almost nine years; and I actually was training this year. But then a few weeks before Bolder Boulder my running career hit an all-time low when I suffered a calf strain after Mile 3 of the Colorado Marathon. I finished that race but didn’t run ever since. I biked a double century, but even that ride was nearly a disaster. Then I went to China for a week and half, where not only did I not run, but I expected that being at sea level and air pollution would worsen my athletic prowess even more.

At least I would be well rested. The night before the race, I stayed with friends Danielle, Jeni, Julian, Krista, Kyle, and Stephanie at Kyle’s sister’s super sweet home in Boulder, one of the nicest homes I’ve had the pleasure of being in. Its views of the Flatirons were inspiring and it was a mere 15-minute drive from the start. I snuck out of the house at 5:40 a.m. as I was put in one of the earlier waves, the 7:02 AB wave, on the basis of running a pretty decent 5k run back in November.

Having low confidence today and also warned by several good runners that this was a fairly hilly course, I started in the back, behind the high-school female cross-country-ers wearing tutus shown in the photo above. My game plan was to run behind them and try to stay with them until the end. I failed at that as they dropped me by the halfway point.

Around that time I caught up to a kid about half my size and looked like he was about 8 years old. I couldn’t believe a little dude like that could be running as fast as I. He and I then commenced something of a battle, or so it felt as at one point he started kicking me in the thighs. Not intentionally, I presume; it’s just that I was behind him going through one of the many corners, and he slowed down way too much. After receiving about three or four kicks from him I went around him, and never saw him again so at least this boy didn’t beat me.

I was actually feeling “not bad”—just not ready to really push—and kept the pace steady almost all the way to the top of the final climb before entering Folsom Stadium at Colorado University. Then I was able to put on something of a sprint especially when I realized I could finish under 45 minutes. Final time was 44:52. I was really happy with that because before the race, and even during the race, I figured I would finish in over 45 or 46 minutes. Plus, the course ended up measuring an eighth-of-a-mile long per my Garmin device.

I finally did a run in 2014 where I exceeded my expectations. While it was not world-beating by any measure, it did feel like I did put some points on the board after all.

Even though this race in Boulder had 54,000 participants and I am notoriously bad at being able to spot people in anything approximating a crowd, somehow I encountered lots of people I knew from Fort Collins. This included Bob, Eddie (no less than three times), Connie, Marissa, Pete, Jaclyn, Tim, Roger, John, Andrea and Lauren S. That was in addition meeting up with the six friends I stayed with the night before after they had finished running the race too.