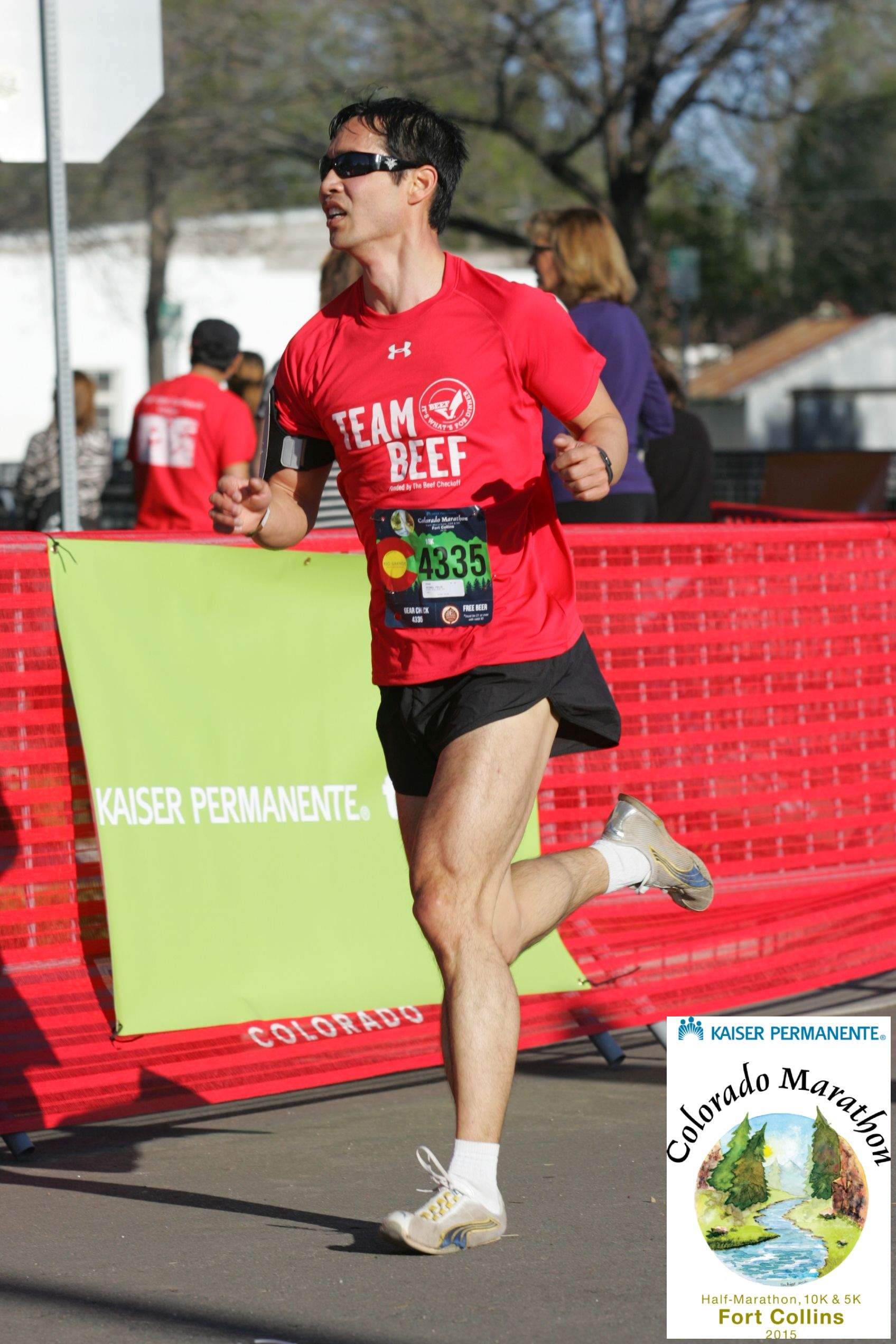 It was something of an accident that I even ran this race. The original intention was to race the speedy, mostly downhill half-marathon course, but I waited too long to sign up and that distance ended up being sold out. So I decided to take a shot at the shorter ten kilometer distance. Probably just as well—I haven’t been running much this year so even five kilometers at par pace would have been a challenge.

At the start off Mountain Avenue and Mason Street in downtown Fort Collins, I lined up in the second row next to my friend Josh—a speedster from Tuesday Night Track. In the past we were pretty even for a lot of distances, but considering my current run-fitness level I had no intention of trying to keep up with him today. Sure enough, after the first mile he already had about 40 seconds on me, and I had to run my own race.

The primary thing on the agenda was to not blow up. The first couple of miles were uphill, albeit a very gradual one, before flattening out after a turn onto Taft Hill Road. Then there was another uphill that was visibly more significant, followed by a downhill just before the midway point.

The midway point actually was a turnaround point, so runners actually had to back up the hill we had just come down. This was steep enough to be classified as “brutal” by Coloradoan report Stephen Meyers in his recap of the event, so I am glad I was not the only one who was a bit taken aback by this undulation of the earth’s crust. Before the race I had imagined this course to be flat.

After cresting that hill I figured the course was going to be all downhill, but it did not retrace what we had just run on. Instead, it went through different neighborhoods which included another roller or two. Somewhere around here two women, who were battling for second place, passed me. I briefly tried to keep up with the first one of them, but then decided my lungs were not chick-proof worthy today, and resigned to merely maintaining pace.

My efforts then turned to holding off a challenger from behind. In the last couple miles I could hear a pair of feet gaining on me, and if the race was a little longer they would have caught me for sure. As it was, my Microsoft Band buzzed me at Mile 6 so I knew when there was only 0.2 miles to go. I promptly took off despite not being able to see the finish line.

After rounding a corner—there it was! The finishing clock read 45:00—my pre-race finishing goal—while I was still 50 meters from the line, so a little dejectedly, I eased up. This ended up costing me a place too, as if I kept the pedal to the metal I would have passed another man who had a good 100 meters on me until I commenced the 0.2-mile sprint.

Finishing time was 45:09, or 17 seconds off my Bolder Boulder final time from last year on a similarly hilly course. Not too bad.

Afterward, there were several tents with free grub, including stone cut oatmeal from Whole Foods, energy bar samples from my friend Shauna Sledge’s The Paleo Diet Bar, and beer from Odell’s. Then Maureen and I met up with a bunch of running friends at the Blind Pig Pub in Old Town for $1 mimosas.

I think I’m glad I ran the 10k instead of the half marathon, if only to have more time to enjoy all the freebees at the end.