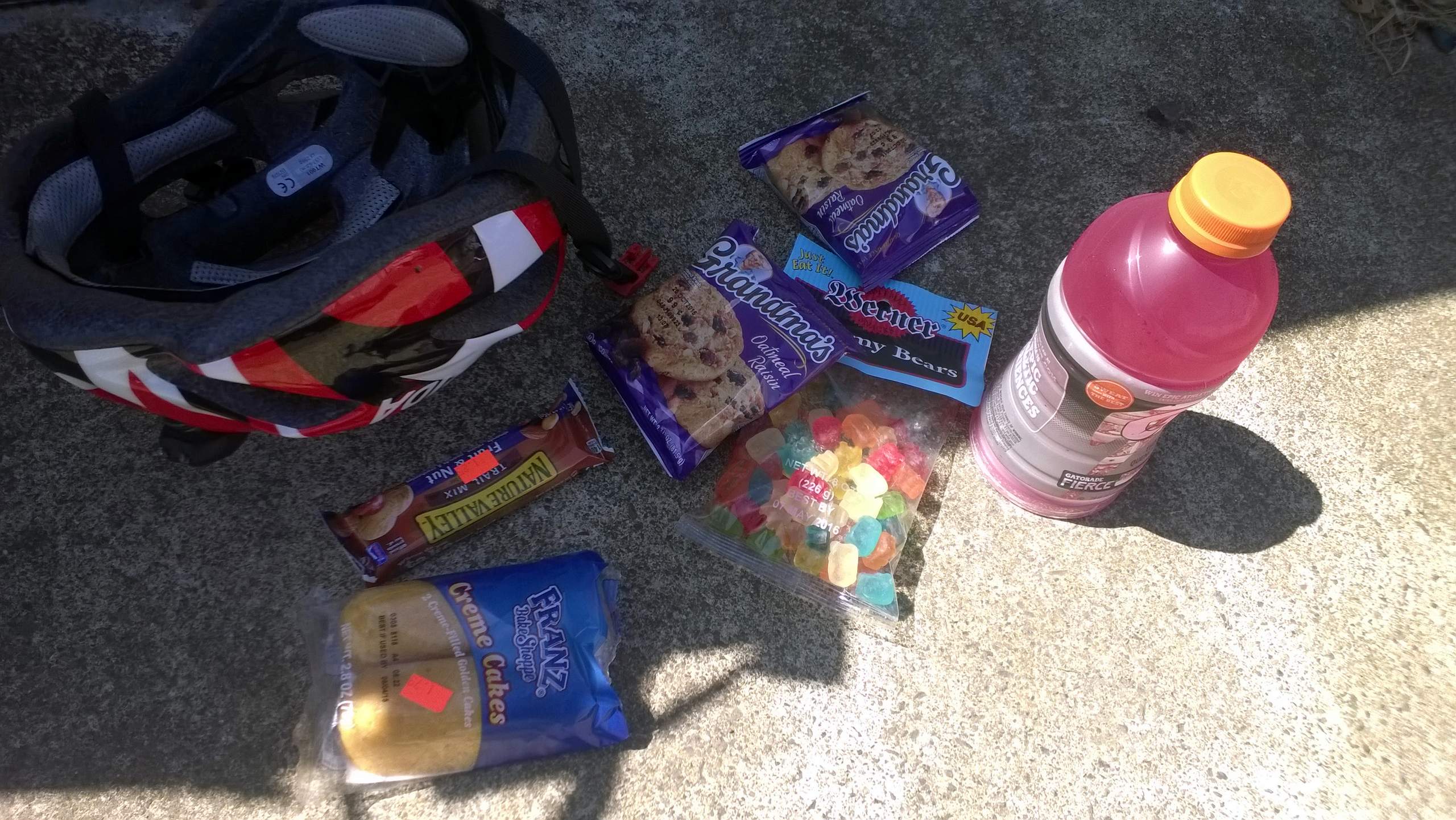 “No outside support. No drafting. No entry fees. No prize money.”

This is the essence of the Trans Am Bike Race. Not only does it keeps the playing field level, but it makes the race accessible to as many folks as possible by eliminating crews and their associated costs. Support vehicles, gas, lodging and food for crew members is expensive. The typical cost of riding the Race Across America (RAAM)—the famous cross-country bicycle race that is three-quarters the length of the Trans Am Bike Race—can easily be around $10-15,000 for that reason.

That is not to say the TABR is cheap. It still requires money to get you and your bike to the race start and back home again, and to provide enough calories to propel yourself to the finish.

Below are my actual expenses to participate in this race. I kept track of the expenses by charging almost everything to a single Mastercard, and then importing these expenses into Microsoft Excel. There were a few times I had to pay with cash, in which case I wrote down the expense at the point of sale and later entered into the spreadsheet.

After I completed this exercise there were over 190 line items for expenses—suggesting that I had shelled out dollars to around 160-180 businesses—but I have summarized them in an easier-to-read table below.

Below accounts for every expense incurred to do the race, sans one: the cost of my bike. I did, however, include special equipment and parts that I do not use for a training ride and got specifically for this race.

The table also includes spending for hotels and food before and after the race while traveling—such as when I stayed in Astoria for two days and Yorktown for one.

Some of the expenses in the table above would have been incurred even if I did not do the race. For example, I still would have needed to buy groceries and would have dined out during the same four week time period, so normal amounts of food can be subtracted out.

Furthermore, some of the race expenses were recouped by subletting out a room in my house, which I otherwise do not do when living at home. Also, I am reselling some of the special equipment I needed for the race, primarily on eBay.

It is arguable that the race caused medical issues that incurred expenses during the weeks afterward, including massages and consultations with a hand clinic for my numb hands. Thus, if you are so inclined to count them, add another $400 to the Total Expenses.

Groceries: Almost 100% of the groceries I purchased was junk food and soda, with the vast majority of them purchased at convenience stores at gas stations.

Airfare: I only flew once: a flight from Newport News, Virginia to Denver, Colorado, booked one day in advance.

Bicycle parts: Starting the race on brand new tires ($125 for two Hutchinson Intensive tubeless tires from eBay) was essential. My pedals broke during the race so I purchased new Shimano SPD pedals at a bike shop in Breckenridge, Colorado for $60. Other expenses were for sealant, patches, spare tubes purchased before the race, and for some bike servicing done at Newton Bike Shop in Kansas.

Shipping: Nine days before the race, I shipped my bike to the Norblad Hotel in Astoria (with advance reservation and permission from Norblad) via ShipBikes.com, which uses FedEx, for $70 (including $2000 insurance). After the race, I picked up a cardboard bicycle box from a shop called Bike Beat in Newport News, and checked in the bike on the Delta flight for an additional $150. I mailed clothes from Astoria to Yorktown and also had Newton Bike Shop ship home my backpack and sleeping bag from Kansas.

Race-related fees: This included $180 worth of Adventure Cycling Association maps, $65 to TrackLeaders.com for satellite tracking on their website and renting a Spot Trace satellite tracker, and a $15 National Park Pass to bike through Yellowstone.

Clothing: I spent around $50 on Shimano mountain bike shoes that would allow me to walk with SPD cleats easily (instead of my normal road biking shoes with bulky Speedplay cleats). I also had to buy $40 worth of clothes (shirt, pants, and underwear) to fly home in after the race as there was a U.S. Postal Service mix-up which did not enable clothes I shipped from Astoria to be in Yorktown at the time I arrived. At various times during the race I bought new gloves and socks.

Dining: This included McDonald’s and the like, and also some better restaurants such as when I treated people out to dinner on a couple occasions.

Buses & taxis: I took the Greyhound from Fort Collins, Colorado, to Astoria, Oregon for $102. It took 1.5 days but turned out to be an interesting tour through several states. I also took a taxi from Yorktown to the Courtyard by Marriott in Newport News (six miles) with my bike for $20 including tip.

Medical supplies: With 90 miles to go, I passed by a CVS Pharmacy at night and purchased a neck brace, hoping it would help me keep up my head while riding with Shermer’s Neck. It did not work as I hoped and I only used it for 40 miles before taking it off and later discarding it. I also purchased Advil at various times of the race—again for Shermer’s Neck.

I certainly could have spent less for the race, but I believe I spent a representative amount for someone who was trying to be competitive. I considered the Trans Am Bike Race a lifetime event that I was unlikely to ever repeat again, and thus I was pretty liberal in my budget, especially towards the end of the race when I was willing to pay almost anything to get to the finish safely. And a total of $2760 (or $4000 without offsets) is pretty reasonable for most four week vacations.

A racer on a tighter budget could have done the following:

So I used the same credit card the whole trip and the bill came in last week. Not as bad as I thought.

$2000 odd dollars. Broken down: $300 dollars on clothes in Williamsburg (gimme a break I deserved them) unlike the $30 dollars I spent for Donncha. Flip flops, T-shirt and swimming trunks and straight into a taxi.

And $135 on new pair of cycling shoes when the strap broke on my old pair. So maybe I didn’t spend so much on food and accommodation.

Virgin using Delta as a carrier had no charge on long haul flights.

One hotel was $98; the rest of the motels averaged about $40 a night. Plus two days in Yorktown motel $150 a night

The rest of the time, I was wild camping or forecourt surfing. I think I did 3X 40+ hour rides which eliminated the need of accommodation for 6 whole days.

Had a bike tune up and 2 new tyres half way in Kansas Newton bike shop. Can’t remember how much but cheap at half the price. Also had chicken curry (not too hot), triple egg and cheese breakfast and dormitory for a couple of hours and a massage all thrown in.

Oh, and I just remembered $150 speeding fine driving down from Seattle to Astoria. The cop clocked me doing 110mph but wrote it up as 80mph when he saw I’d only just arrived and it was a hired car. Plus the hire of the car was $150, I think. So it all adds up. I better get off Facebook and back to work to earn some more money for another adventure.

2700 for new flight, 280 for taxi to the airport, 25 for bike box and 200 for bike. Trip of a lifetime—priceless. [I presume the currency was U.S. dollars. Donncha flew out of Washington, D.C.; hence the expensive taxi ride.]

Adam Kazilsky of Milwaukee, Wisconsin may have had some of the lowest expenses. He reported:

Total of $75 spent on lodging/camping. Spent $70 on a hotel one night for my birthday. Other than that, I paid $5 because I got caught sneaking out of a state park (the ranger ended up charging me for a day use instead of the $20 camping fee).

I spent 3000â‚¬ including the flights and bikes shipments (I didn’t use any hotel), and the money spent in the 10 more days that I was in US after the race.

Only 2 showers with cold water and a bath in a river… Hehehe. Low cost trip.

It seems to me that the Adventure Cycling maps are mostly a waste. It's a lot of money to spend for information that can be easily obtained in other places. Their routes are often not the best way to cycle through an area, but if you are required to follow the Adventure Cycling route, well, then there is that. ↩ Reply

Thank you so much for this information. I just saw Inspired to Ride, and am seriously considering doing this adventure. ↩ Reply

You're welcome. Best of luck if you embark on this adventure! ↩ Reply