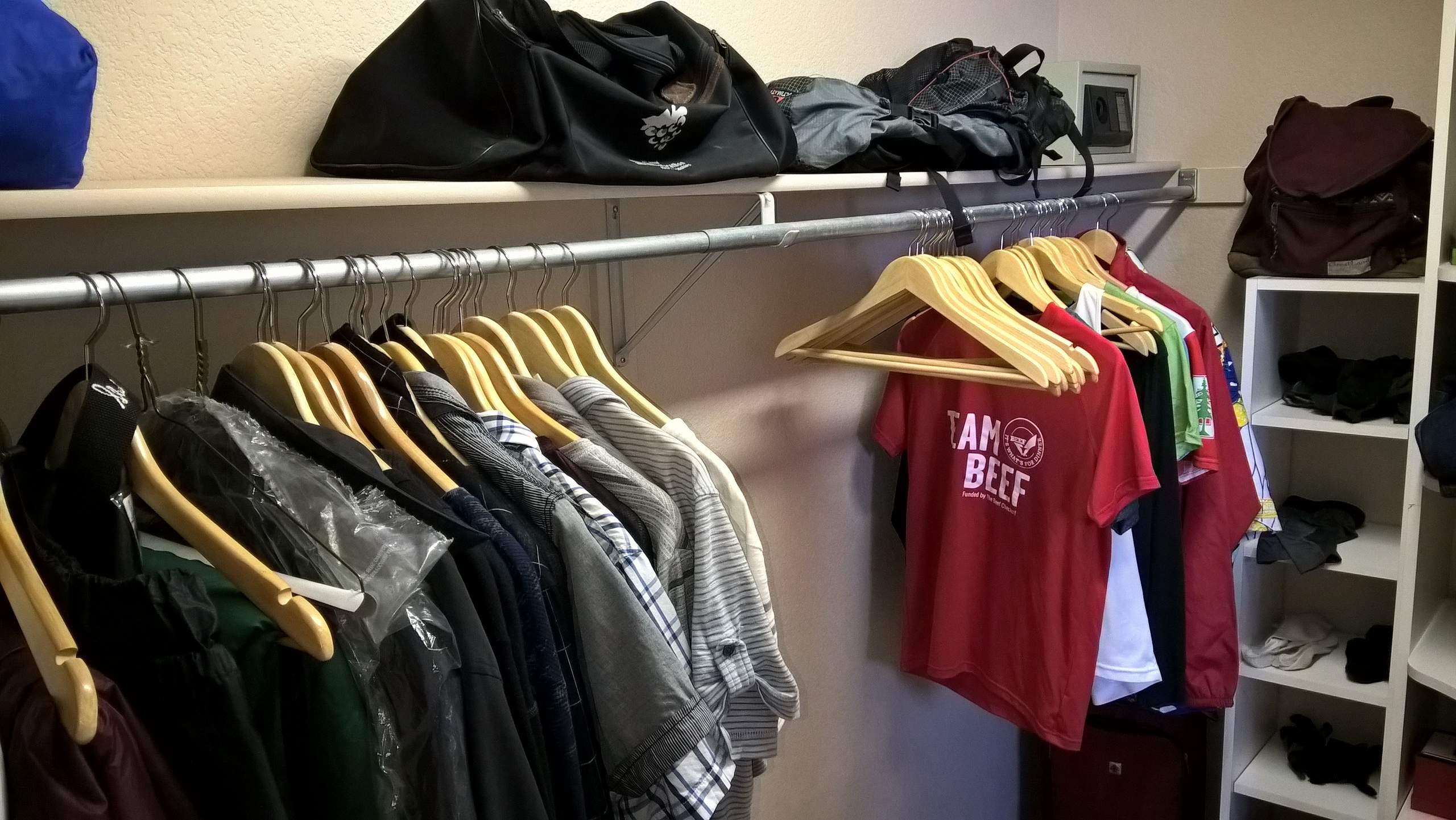 Aside from the six bicycles I have at home, I have usually thought of myself as being pretty minimalist. For example, when I moved to Fort Collins 10 years ago, I had only six boxes of various household items, some small bags of sports-specific equipment, and three bikes (one of which I left in California, where it still remains today). In fact, I was able to pack everything in small two-seat sports cars. And for years afterward, whenever friends would come into my house, they would make a comment that went along the lines of “Your place is very uncluttered. I like how do not have much stuff.”

So it was a bit of a shock to see just how many material objects I had accumulated when going around the house to take inventory of the items I have not used in over a year and/or wanted to donate, sell, or discard. I dubbed this exercise The Big Purge. During The Big Purge, I wondered, “How in the world and why did I get all these things?”

My closet is now quite a bit emptier, as shown in the featured photo of this post. I am also down to about 10 hard copy books, including some mechanical engineering reference manuals, a thick course catalog from my years at Stanford, some compilations by Peter Egan that I could not find at the library or in digital format, and Une Année en Provence by Peter Mayle (the French translation of his excellent A Year in Provence).

Being somewhat obsessive-compulsive about simplifying and living clutter-free, almost every year I have done some sort of home cleanout—only on a smaller scale. But for The Big Purge, I got inspiration from two people in particular.

One was my friend Adam Tow from Stanford. This year he adopted a minimalist uniform and discarded a ton of clothing—clothes he no longer needed because of his uniform and because many of them no longer fit since he lost over 30 pounds during the last couple years.

The second inspiration was Bea Johnson of the Zero Waste Home. Bea stated,

Her motto is “Refuse, Reduce, Reuse, Recycle, Rot…in that order.” I am pretty good at the last three activities, and The Big Purge helps address the second. Clearly, going forward I need to be better about the first.

Look how wonderfully clutter-free her Marin, California home is in this video!

She majored in fashion design in college and yet her closet consists of “three pairs of pants, one shorts, two skirts, one bra.” Still, I don’t think her closet is as minimalist as Adam’s.

I donated the following items so other people could use them and I could get a tax write-off (in the case of donating to non-profit organizations).

I gave most things to the Vietnam Veterans of America organization, since they usually can pick up donations (excluding large furniture) from your home within 24 hours. But I gave all the books to the library. Many of the books I did not read, but I noted many of them on my reading list to either check out from the library or obtain in digital format (my preference) for reading in the future.

There were also a tent and a swing that the previous owner of my house left behind 10 years ago that I gave away in the free category on Craigslist.

Items Sold on eBay and Craigslist

I sold the following items on eBay and Craigslist for $410 after shipping costs and PayPal, listing and final value fees.

These are few tips on how and what to “let go” of.

A Note About Craigslist

Generally I have had pretty good luck dealing with folks through Craigslist. But I have also encountered several flaky people who are quick to claim free items, then never come and pick them up. I gave one person, for example, five chances to pick up some free wooden garden stakes the previous homeowner left behind, and ultimately she never did despite saying after the fourth time, “I promise to pick them up today.”

My advice, then, when you are listing free stuff on Craigslist: add a line at the bottom saying, “While I am giving this away for free, I ask that if you claim them, you must pick them up when you say you will.”

I like the idea of "minimalism," but I don't understand the rationale behind getting rid of things like pull buoys, battery chargers, multi function knife, bivy sack, bottle for aero bars, and many other items. What if you need and/or want these items in the future (are you sure you'll never use a pull buoy again? :-) In that case, you will have to purchase again the specific item... seems very wasteful, in terms of time and money, unless you are thinking of it from a benefactor point of view, in that you are providing these used items to other people, and then just buying a new item as a replacement whenever you need it.....? ↩ Reply

"Will I need this again?" is a good question to ask whenever making a decision to get rid of something. But it is equally important to answer it truthfully. I think a lot of people think "I might need this again in the future" when they really do not, and it leads to hoarding!

In the case of the items above, I can honestly answer "I will most likely not need them":

There might be a couple items I may need again in the future, but they can always be repurchased---often with a new and improved model. Also keep in mind that many items (especially electronics like the Garmins) depreciate rapidly, so if they are not going to be used it makes sense to sell them sooner than later.

In the meantime I'd rather have less clutter to sift through while looking for something I really need to use. It also makes me happy to think something that otherwise would just sit around the house collecting dust and cobwebs can be used and appreciated by other people. ↩ Reply

Excellent progress, Felix! My first Icebreaker Anatomica t-shirt is starting to show some tiny holes in the back. This is no doubt due to (1) the fabric being so delicate and that (2) I've been wearing the shirt pretty much every day when I go out of the house. Fortunately, I bought at discount a few more Anatomica shirts now (a long-sleeve grey, heather gray, and black v-neck). I'm hoping to get a few more months of use from the original shirt before switching permanently to the backups. ↩ Reply

That is great, Adam! I guess you already got well over 100 uses (days) of our first Icebreaker shirt so it is good you have some on-sale ones waiting in the cards when it is time to finally retire it. ↩ Reply