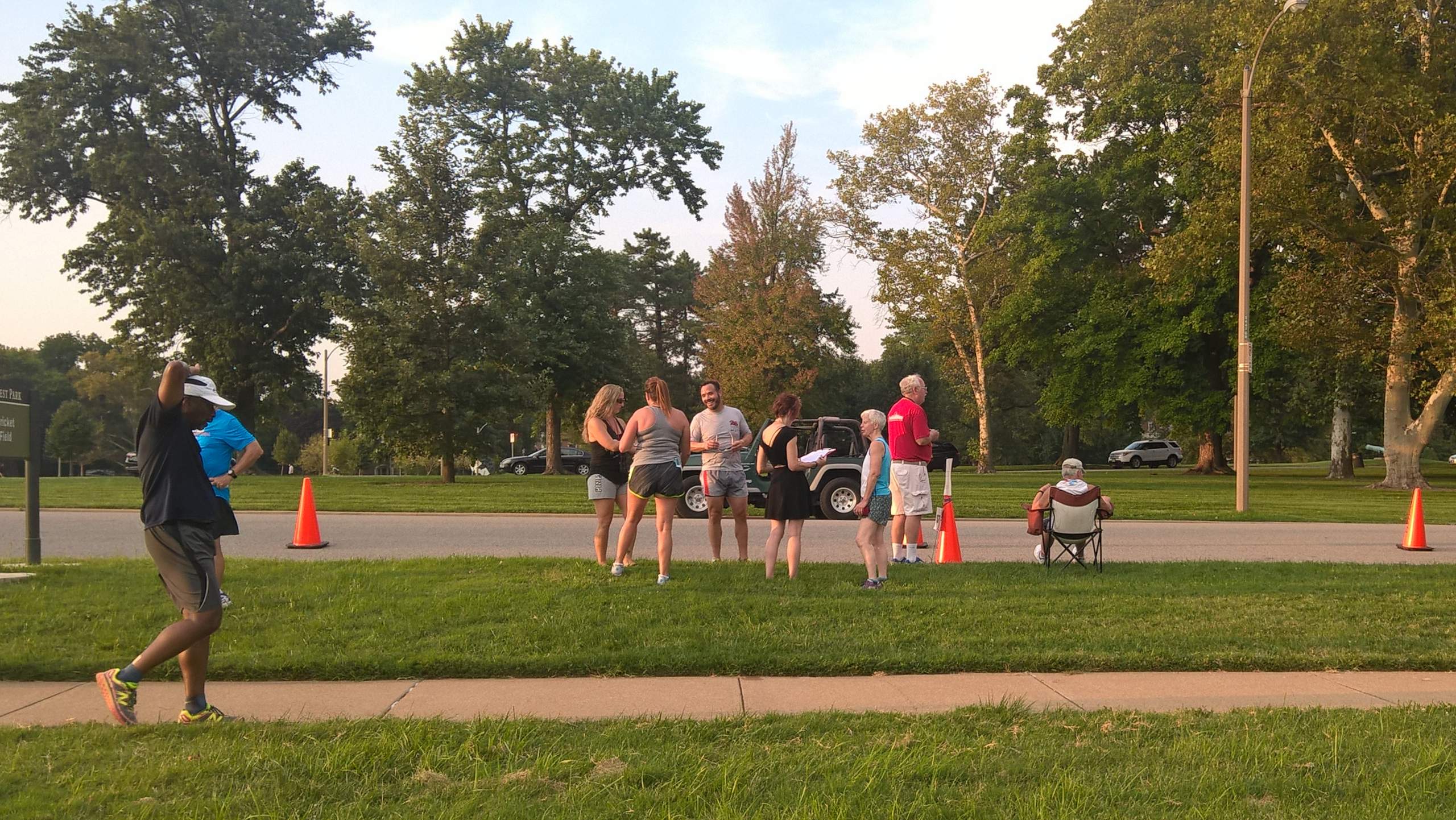 This was my first race in St. Louis since last October’s Rock ‘n’ Roll St. Louis Marathon. I hoped to somehow recapture the magic of that remarkably successful event in this race put on by the St. Louis Track Club where runners are scored by how close they finish to the times they predict for themselves. Accordingly, I predicted 20:12 even though I hoped that I would be able to squeak in under 20 minutes.

That turned out to be overly optimistic. Quite.

I made a mistake before the race by leaving too late for it, so I had to run the whole 1.4 miles over. By the time I arrived at the race start at the Forest Park Visitor Center, my body was already a little fatigued and really sweaty. That was far beyond the typical 200-400 meter warm-up I would do before a 5k race.

Then there was the matter of the weather. At race start it was 89 degrees with 45% humidity. I remember already overheating during the Trans Am Bike Race in such conditions and that was with significant air current at double-digit speeds. For a running race, this was way too hot.

Nevertheless, I took off with the front-runners and hoped that 3.1 miles was short enough to endure such conditions. In fact, it became apparent that the weather was affecting the other runners, turning it into an interesting and unusual race.

After the first 20 seconds, for example, a runner—let’s call him Runner A—surged strongly and opened up a 10-15 meter gap on me. He maintained that gap for about one minute after which he suddenly slowed down, allowing myself and a loudly foot-striking participant—Runner B—to pass him.

Runner B opened a gap on me that grew to about 100 meters. Then at about the Mile 1 point he started walking. This enabled myself and Runner A and another person—Runner C—to catch and pass.

Eventually the placing would settle into Runner C, Runner A, and myself. But at Mile 2 point, I heard footsteps coming up behind from Runner D.

“You seem to be shutting down already,” said Runner D, apparently noticing my faltering pace. My legs were tired and I was uncomfortable with rapid breathing and heat.

“I know,” I lamented. The man tried to give me some encouragement: “Run strongly up this hill and speed down the downhill.”

My body was in no condition to pick up the pace and as a result I did not surge, but somehow I dropped Runner D on the slight incline. I think it was more a matter of Runner D suddenly slowing, much as Runner A and B had done earlier.

From there I just maintained tempo until the end, maintaining third position. I did not even bother to do my customary sprint at the end and, according to Strava, ran the last 0.1 mile at 7:22/mi pace. At a final time of 21:08, I ended up being 56 seconds slower than my predicted time.

That was disappointing, but the run back to my Central West End apartment put the effort into better perspective. My legs were cramping and I could only muster an 11-minute jog even though I knew I had to hurry back in time for a teleconference. My calves were sore for the rest of the night and morning after. The heat and humidity definitely had taken a toll.

But for the next SLTC September Pace Series race—4.2 miles—I will try to save my legs better before the race, run more conservatively at the start and try to pick up (or at least maintain) the pace at the end. And cross my fingers that the weather will be cooler by then.