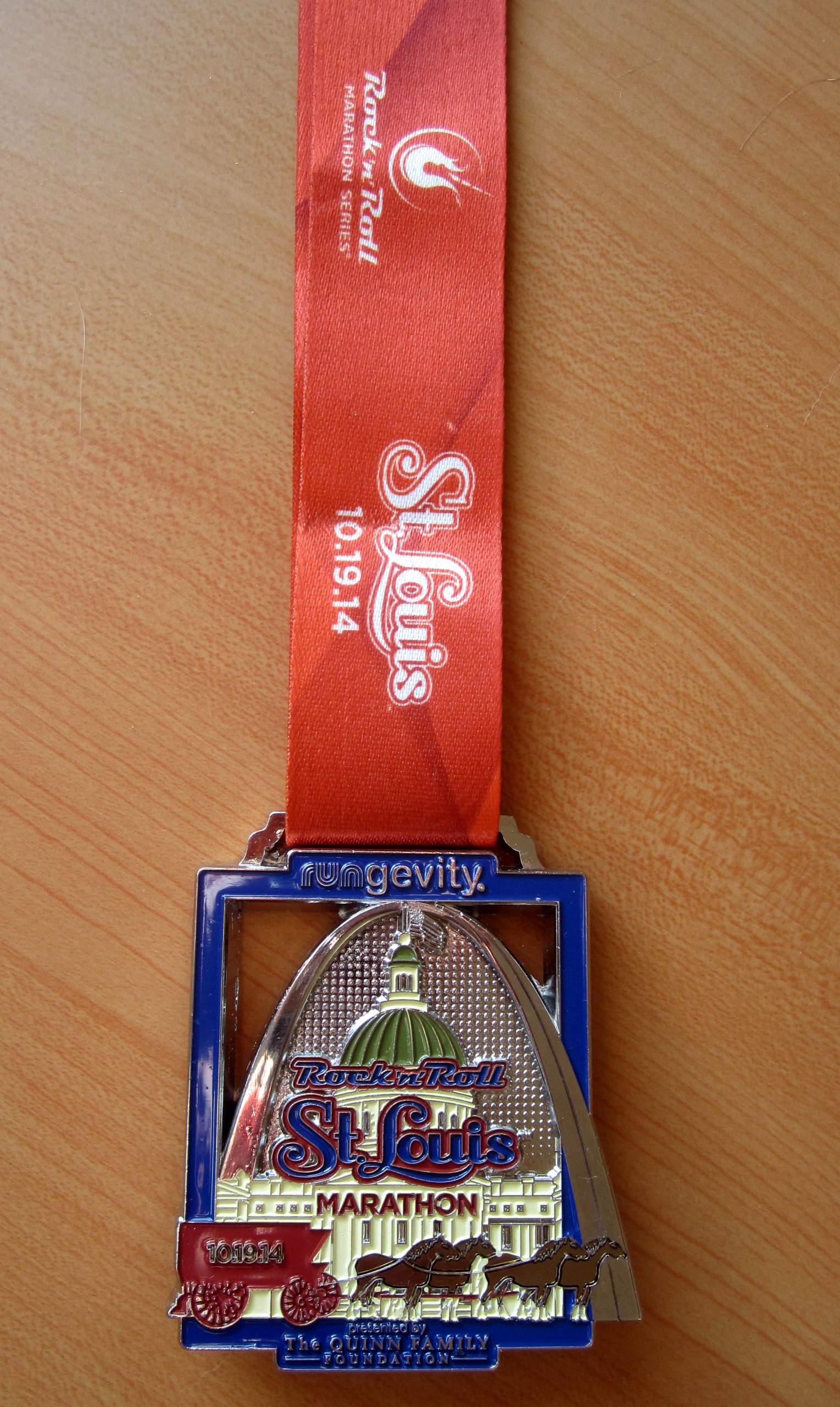 When I crossed the finish line in September’s 1st Annual Fall Classic Marathon, I figured that was my last marathon for nine months or so—or at least for the calendar year 2014. But then Maureen mentioned she needed to go to St. Louis, and I noticed that the day before she was to visit a graduate school, there was going to be a Rock ‘n’ Roll Marathon. Missouri was one of the 25 remaining states I had not yet run a 26.2-miler in, and race organizers were offering a “double lucky” $26 discount from the $135 registration fee if I signed up by the 13th of October.

And that is how I found myself doing an impromptu marathon.

I still felt I was in reasonable running shape despite not doing a long run longer than 10 miles since September 14. But because the St. Louis course has as many undulations as the Gulf of Mexico does during a Class 3 hurricane and my historical performance in hilly marathons has ranged from shaky at best to complete engine failure at worst, I settled on a strategy that my friend Adam from Stanford had urged me to try a few times now. Which was to run slower than I normally do in the first part of the race, and bank energy (instead of time) for the end.

In fact, I started running with the 4-hour pace group—not by design, but because I missed my starting wave due to jumping in line a bit late for the port-a-potties. Keeping my effort and breathing well under the anaerobic limit, I still managed to move up in the field until by Mile 8, where I found myself among the 3:30 target-ers. Right there and then I resolved to run steady with this bunch, knowing that if I could hang with it all the way to the end, I would finish at least a couple minutes under three-and-a-half hours due to starting a couple minutes after this group. (Thank goodness for chip timing.)

The group included a rather chatty, blond pace-sitter holding the 3:30 sign, a few guys in their 20s including one who had just run a 50-kilometer ultra the week before, a woman trying to qualify for Boston and a petite gal in pink running her first marathon ever. We all stayed together heading out of downtown St. Louis, over the hills past a Budweiser factory, and through Carondolet Park which was a turnaround point with about 10 kilometers remaining. This is where things started to get interesting.

The pace group started to fragment, with “Pink” and another guy taking off ahead and the other woman trying to qualify for Boston starting to fall back a bit after running a few steps ahead of the pacesetter for most of the miles. Meanwhile, I felt like I was feeling unbelievably fine for being at Mile 20 of a hilly marathon, and was tempted to go after Pink but managed to maintain discipline. “I am going to respect both the hills and the distance,” I kept reminding myself.

At Mile 23 my legs were still feeling ok, notwithstanding a blister that had developed on my left foot and muscles that were definitely fatigued but not yet cramping. And so at Mile 24 I made my move, turning up the intensity half a notch until I had caught up to Pink, who unfortunately had, by her own account after the race, had hit the wall. Meanwhile I could still hear the chatty 3:30 pacesetter—who was keeping a remarkably steady pace—behind me. So I turned the effort up another half-notch with 1.5 miles to go, cognitive that if I pushed too hard I could have a muscle-seizing ground-kissing collapse like in the Fall Classic Marathon, but feeling like I was going to successfully ward off Mr. Crampy today.

In fact, I did! That last mile-and-a-half was surreal, picking up the pace to sub-7:30/mile, then to sub-7:00/mile, all while hearing the 3:30 pacesetter yelling out “go 3:30 group!” during that time. I’ve never been able to do this at this point in a marathon before, not in the marathon I ran an all-time personal best of 3:03:24 or even the marathon I won.

I even managed to cross the finish line in an all-out sprint while sparing a thought for the Tuesday Night Track workouts and Jane, our inspiration. Final time was 3:26:38. For the second marathon in a row, my performance had met my upper expectations. And despite it being only my seventh-fastest marathon time ever, it was my best time for a course that I’d classify as hilly.

Gotta love the impromptu marathon. This is certainly my last one for 2014, though.