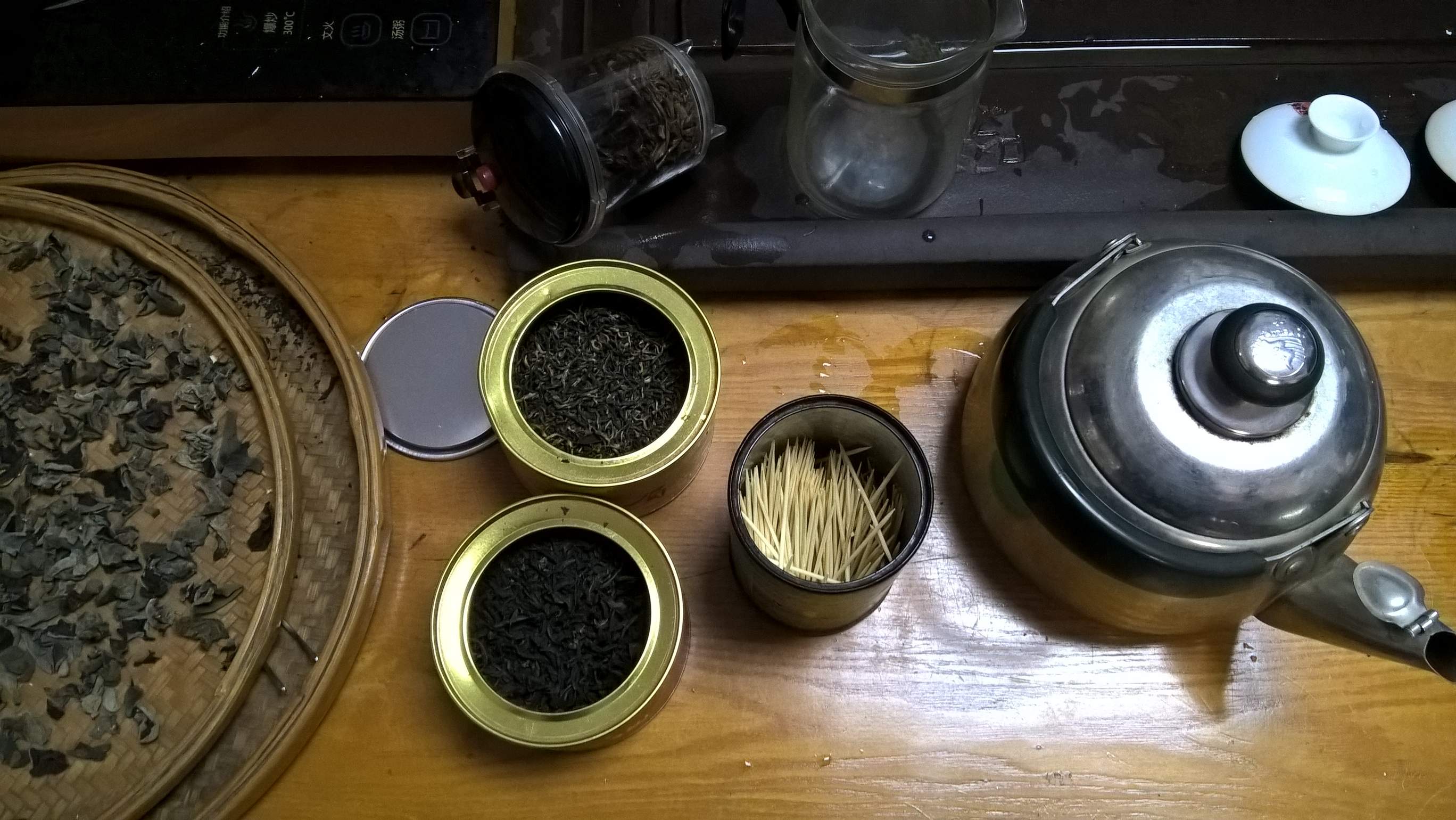 I was wondering when we would hit the shops. After all, the 8 Days Fujian Wonderful Tour we were doing was what is informally called a shopping tour. A shopping tour is a tour that takes you through souvenir shops and factories—in addition to notable places of interest for sightseeing—and can be much less expensive than a no-shopping tour because the factories subsidize the tours and the tour guides receive commissions (usually about 5%) from the shops when purchases are made. Usually the shopping destinations are for expensive, high-margin luxury goods like jade, pearls, and corral jewelry. Or tea.

But wait, you ask, isn’t tea pretty cheap? Well yes if you, like me, typically buy one box of 40 tea bags of Celestial Seasonings green tea manufactured locally in Boulder, Colorado every couple years for $4.

But like just about anything (e.g., phones, watches, clothes), you can buy decent low-cost tea or you can buy “super good” tea that is super expensive. Yes, even in “cheap” China. I learned this a couple years ago at a tea plantation outside in Hangzhou where the representatives were hawking small packages of Longjing green tea for nearly US$200.

Of course, to get you to buy these packages of tea at the price of a mid-range smartphone, the sales representatives usually need to convince you of their superior value. Some sellers are more effective than others. I was reminded of this when we went to the first shop of the shopping tour: a tea house in Wuyishan.

Now, I am certainly no expert on selling, but here’s a hint on what not to do: corral a bunch of tourists into a room, bare your teeth and start wagging your index finger while shouting at them. Especially not for a whole 45 minutes.

The saleslady at this tea house did not get that memo. Pity, because she was actually kind of cute, but from the first moment she opened her mouth I needed to plug my ears.

Disregarding the delivery, what were the purported benefits of the tea (Oolong, I think) being sold? “Cures diabetes, rheumatism, constipation, and urination problems,” reported my mom. “The older the tea, the better.” Cost: one package for 550 renmimbi, or about US$87.

Only a few people from our tour group bought any, but we had another chance at another tea house when we returned to Xiamen. Here the presenters were easier on the ears, but they were harder on the sales push.

For example, a few of us—including my mom and I—tried to leave (long after the presentation was over) no less than three times, and each time we were told we had to go back into the room. One person tried to say he needed to go to the bathroom down the hall, but he was told that there’s an additional bathroom attached to the room. So basically we were locked in the room until people from the tour group bought what sounded like “tian qÄ« chu” (or “field seven flower;” I am sure I got the Pinyin wrong) tea.

Those lucky persons at least can now expect to get the benefits of lower blood pressure, reduced chance of diabetes, and the ability to “urinate and poop more.” When she drinks the tea she can also revel in the knowledge that this particular tea was farmed in a village where women work in the fields, are the breadwinners of the family, and are “attracted to men with big eyes and big bellies” as the latter signify having high intelligence.

I didn’t catch how much they were charging for this tea because I was thinking more about how to escape!

But if you are thinking that we missed out on obtaining a tasty (?) warm drink that can relieve all sorts of maladies, fear not as my parents—independent of a shopping tour—managed to find similar tea in similar-sized packages to that from the first tea house in a small street-side shop the following week in Guangzhou. That tea cost only about US$3, for a savings of a non-trivial $84.

But buyers of that tea would generally miss out on the whole shopping tour experience. At least their eardrums would be spared.

We should do the Celestial Seasonings tour someday! I promise they're not so bossy like that lady. :) ↩ Reply

LOL, we should! You were there a few years ago, yes? What a relief they aren't so bossy. :) ↩ Reply