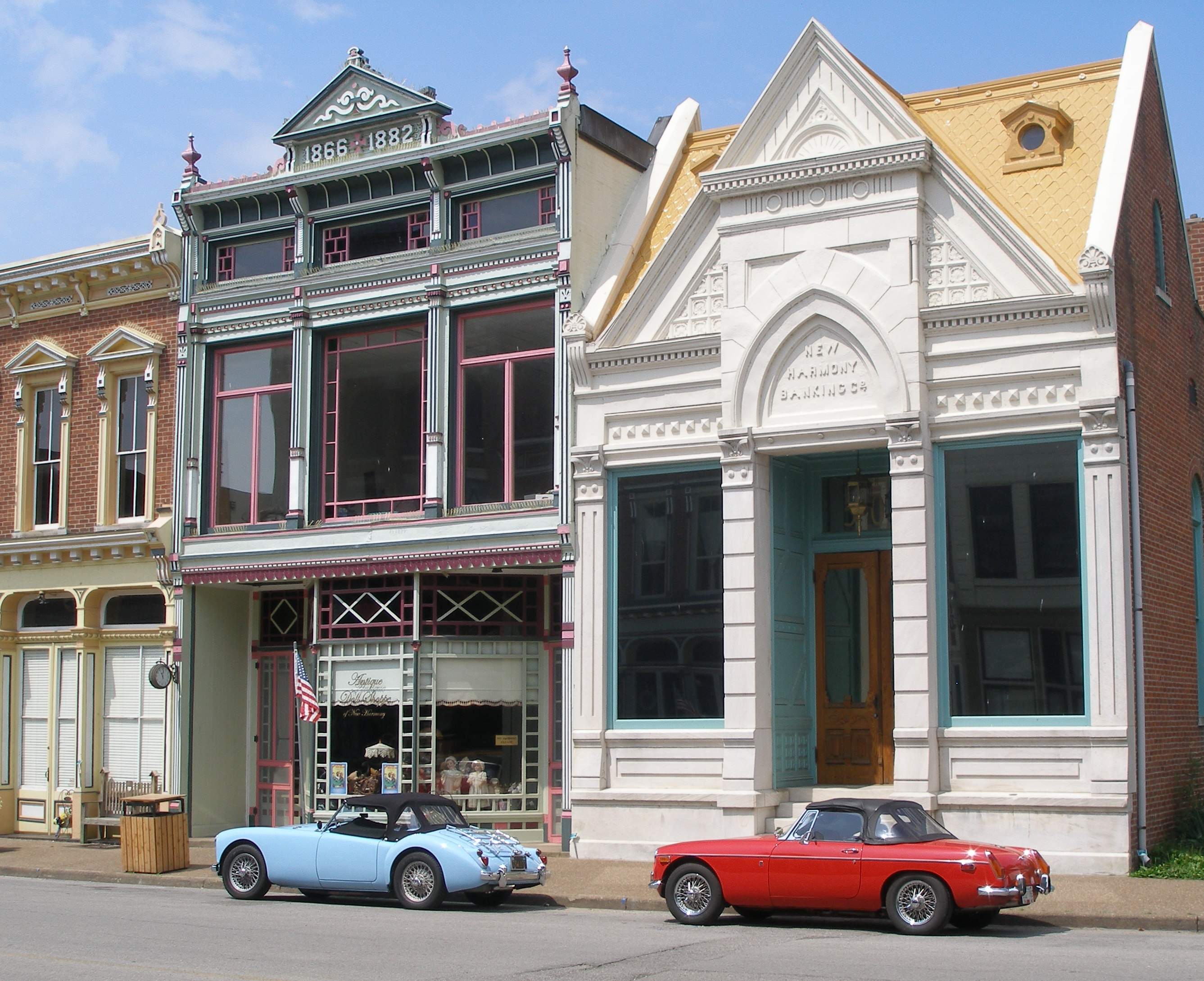 It’s been almost nine years since I sold my 1969 MGB, and at least eleven years since last being part of the MG Owners Club. But happily, now and then I hear from—or even see—old friends from the car club who have remained faithful to their British sports cars. Such as in June 2016.

My friend Dan Shockey had forwarded me a message from our mutual friend Mike Jacobsen of San Francisco, who was traveling to Louisville, Kentucky with his friend Jennifer of Vancouver, British Columbia. Mike was driving his light blue MGA roadster, which he got in 1974 while he was still in high school. His friend Jennifer was driving her red 1970 MGB roadster. The message Dan forwarded said they were going to be in Laramie, Wyoming. Laramie is only 60 miles north of my home in Fort Collins, so I inquired whether Mike would be passing through Colorado at all. (I last saw Mike when he did so for the national MGB convention in Breckenridge in June 2009.)

“No, we missed Colorado,” Mike replied, “and went straight across east into Nebraska. We’re in Lincoln tonight, and tomorrow night is St. Louis.”

By coincidence I arrived in St. Louis to visit Maureen the same night Mike did. Thus, we arranged to have breakfast at Courtesy Diner, a 1950s restaurant a few miles from where Maureen lives, the morning after.

In addition to Jennifer, Maureen, Mike and me, Mike’s friend Rick was present at breakfast. He drove over from his home in a St. Louis suburb in a red C6 Corvette convertible to visit with us. (“I’ve only owned red cars,” he said, “except for the blue MGB/GT that Mike now owns.”) Rick’s wife came too but drove separately.

Mike and Jennifer’s road trip to and from Louisville turned out to be quite an adventure, which is pretty much a given for any vintage British sports car. Here are some excerpts from Mike’s emails about the trip.

Yep, I took the A. I’m sooo glad it has the 5-speed [transplanted from a Merkur] now. We’re in Laramie tonight. I think today was 500 miles. I forgot to look at the odometer when I got out. We had one rainstorm, but we could see it way off, so I got the curtains on in time.

Note that MGAs had plastic and canvas side curtains instead of glass roll-up windows, and the convertible top had to be snapped on by hand. It was a far cry from being able to raise the top with the flick of the wrist or the press of the button, unlike convertibles today.

Jennifer’s OD [overdrive unit] started cutting out yesterday and this morning I discovered there’s not enough oil in it to even register on the dipstick. We’re looking for a parts store now, so we can go buy a funnel to fill the gearbox.

Apparently, that was enough to fix the problem:

We filled the gearbox back up and it works fine again. We’ve been checking the level regularly.

And then after meeting with Maureen and me in St. Louis, they went straight to Louisville:

We got here OK except for one detail – the ramp to the very last freeway we had to take in Louisville was closed! We wandered around for a bit until we found a way to get on that freeway, so it turned out OK. Then we arrived 15 minutes before a not-forecast thunderstorm rolled through, so we didn’t have to drive in the torrential rain. That was lucky.

At the MG 2016 All Register convention, they even won a lot of awards:

Today we went to the British Bash, the annual local all-British show, back at Waterfront Park in Louisville. Jennifer won first in class there, plus their first-ever distance award. We also both won a door prize.

Tomorrow we leave New Albany (outside of Louisville) for the Kansas City area.

It turned out they detoured around Kansas City. It sounded like the country’s heat wave was a problem, especially since neither car has air conditioning.

We were going to try to reach Kansas City today, but we took a detour to New Harmony, Indiana this morning, and spent some time there. [Edit 2022-01-13: This was an unplanned stop, but Mike saw an exit sign for New Harmony on I-64 and recalled from history class that it had America’s last large commune, or something like that. Hence, he took the exit and Jennifer agreed to do a short detour through this “quaint and interesting” town.] So we’re in Columbia tonight. We still don’t know which way we’ll be going—it does seem to be hot everywhere but at home. At this moment, going back on I-80 looks cooler, but that can change quickly.

The cars are running OK, but we aren’t—too hot. We stop about every hour or two just to get out and walk around or sit in the shade at the rest areas.

Then they had their second—but final—mechanical issue of the trip:

We’re in Grand Island, Nebraska now. We opted for the I-80 route. We just had our first mechanical of the return trip: the brake lights quit working on Jennifer’s MGB. It was the switch, but she had a new one in her box o’ stuff, so we changed it out in the motel parking lot. All better now!

This last malady reminds me of an old British car joke. “What are the three positions of a Lucas switch?” “Dim, Flicker, and Off.” Haha!

From there they went to Nevada:

We’re in Elko, Nevada now. Last night was Rawlins, Wyoming where the Internet was so bad we gave up on trying to read email. We were going to try for Winnemucca today, but rooms were hard to come by there. I added another pint to Jennifer’s transmission last night too.

The Internet isn’t a lot better here than last night, but I’ll try some pictures. The high point (literally) of yesterday’s drive was the Abraham Lincoln Monument at Sherman Summit, just east of Laramie, WY. It’s almost 9,000 feet. There’s a nice memorial for the Lincoln Highway there.

Today we stopped by the Bonneville Salt Flats. The news was that they’ll probably cancel Speed Week again this year, due to the poor condition of the salt. There’s a lot of people upset with the companies that mine the salt, for taking so much and ruining the Flats. And what are the companies doing about this? Well, on the way out two weeks ago, I took a picture of the Morton Salt facility nearby. When we went by today, the name and logo had been removed from the plant. I guess that’s one way to handle it – don’t let anyone know what your company is.

They did have a freeway sign especially for me near the Flats, though. [“Drowsy drivers pull over if necessary.”]

Mike summed up the final leg of the journey as follows:

The last leg of the drive was from Elko, Nevada back to San Francisco. We got back about 9:30ish and after unloading/unpacking, I slept until noon today.

Earlier in the trip I had ideas about coming into California via either Tioga Pass (and into Yosemite) or Beckwourth Pass (and following the Feather River). But when the time came we were so anxious to get back that we opted for something easier, and cut over to US 50 at Fernley, NV and came back that way, through South Lake Tahoe & then Placerville into Sacramento. It was nicer than I-80 over Donner Pass.

The cars ran well the whole time, so I can’t complain about that. Now I have to change oil, grease the suspension, and wash several states’ worth of bugs off. Maybe tomorrow.

A couple of weeks later, Mike hadn’t gotten to that maintenance yet, but he did have a plan as of July 8th:

No, nothing on the car. Tomorrow is the July MGOC meeting. It’s in El Cerrito, so my plan is to drive the MGA over, and then stop at Treasure Island on the way back for some pictures with the SF skyline in the background. Then it gets lubed and washed.

Sounded like a great trip. I miss these sort of road trips in a vintage British sports car (well, except for the mechanical problems and the lack of A/C), so through Mike’s excerpts above I am glad to be able to live vicariously.

It turns out this was one of several long-distance journeys Jennifer has done in her MGB. Here’s a wonderful article about some of her others!

Felix, you didn't tell me Jennifer & I were soon to be famous and appear on your site! And don't worry; the car is caught up on its maintenance now. ↩Reply

This is still a good story five-and-a-half years later! :) ↩Reply