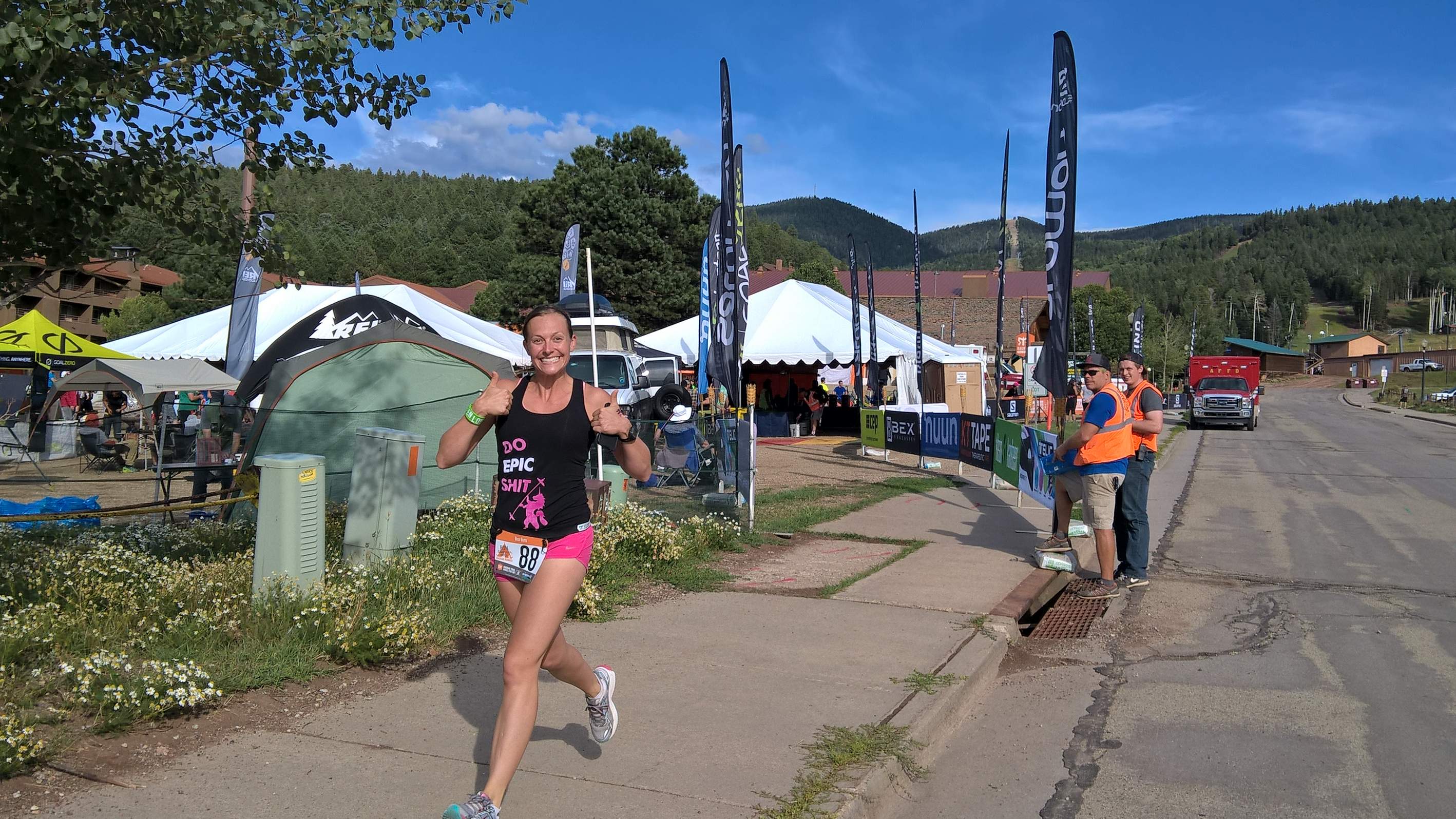 Earlier in the year, my friend Krista had invited me to join her Ragnar trail relay team. It had been 13 years since I have done an ultra-distance relay race, and doing one off-road sounded fun. So sure, why not? “I should even be in good running shape by then as I have a half-marathon the weekend before,” I assured her.

But due to fracturing my elbow in a silly bicycle commuting accident in July, the “good running shape” I promised turned out to be less than a sure thing as I’d only get in two training runs since then. One, however, was the promised half-marathon. Completing that in a not-stellar-but-respectable time gave me confidence that I should be able to run three relay legs for a total of 14.7 miles without too much trouble. It sounded like our team was not going to be in the hunt for a win anyhow, which all but eliminated any pressure to be anything less than Speedy Gonzalez.

Krista, Tamara and I carpooled down to Angelfire, New Mexico with her friends Brad and Aileen driving separately, not far behind. After a six-hour drive from Fort Collins, we arrived at the Ragnar “village” where a hundred or so tents of all different shapes and sizes lay like colorful mushrooms blowing in the wind. Manning our spot was Peggy and her husband Patrick, who had arrived earlier that morning. Their friend Amarah was also there but staying in a rented condo a hundred feet away. Together we comprised the relay team Bear Butts.

Why Bear Butts? We learned the answer pretty quickly: Peggy had brought some body-colored, plastic “masks” for our bottoms that would do Jennifer Lopez proud. Wearing them, however, was strictly optional. Like the rest of the guys, I declined, but Amarah, Krista, and Peggy were all game for it. Krista even later declared that the “bare butt” did not slow her down any.

The red loop was supposed to be the hardest and longest with 1,300 feet of elevation gain and 6.2 miles of trail running. Perhaps, then, I should have started out at a less frenzied pace than 5:55/mile when I began running in the late evening. After the first 200 meters, however, the road angled up and led to some singletrack, which forced me to go at a much slower pace.

How much slower? My Microsoft Band 2 was soon reading 13-15 minutes per mile. Unbeknownst to me at the time, this was an overly pessimistic reading likely due to the switchbacks involved, the relatively infrequent GPS polling of four to seven seconds, and the forest cover. But it made me feel I was struggling up the hill even more than I was.

This climb was long: three miles. I was intent to run the entire way even though everyone else I saw on the switchbacks were walking. Whether my “running” was all that much faster was somewhat questionable as there was one guy I passed who managed to almost keep up with me for five minutes despite alternating between walking and jogging. My lungs and legs were absolutely redlined and the top could not come soon enough.

It finally did after 40 minutes. Then there was a long downhill which was too technical to fully make back time lost on the uphill. Still, I seemed to be moving well compared to the other runners on the course. Throughout the entire loop I managed to pass 12 runners with no one passing me.

However, I did get a little lost with about half-a-mile to go as the trails widened and converged with other ones. Somehow I think I missed a turn. Fortunately I could see the village lights below and I don’t think I ran more than an eighth-mile extra, perhaps losing one or two minutes in the process.

I finished the 10k course in 1:06:38. At first I was little disappointed in that time but it turned out to be the fifth fastest of the 92 teams for Loop 6. It also felt relieving to get the most difficult segment out of the way first.

Around 2:30 a.m., I crawled out of my tent to run Loop 14. The air was breezeless and around 50 degrees Fahrenheit—wonderful running weather under a full moon—and the course began on a wide, well-groomed gravel trail which enabled me to tick off the first mile at just over a nine minute pace. After that, the route led to some steep singletrack with plenty of rocks and roots that could fell a weary runner at any time.

I always run slower at night and today was no exception. Wary of tripping and reinjuring my still-healing fractured elbow, I ran at not even close to a pedal-to-the-metal effort. But as with the Loop 6, I was intent on running the entire way. The forced-slowness-by-darkness actually meant I suffered less than the full-on intensity of the red route, and despite the “endless singletrack” that my teammates had warned me of, I felt that this loop was much easier than one I had done six hours before.

I passed 11 runners here with yet again no one catching me. My final time turned out to be the eighth fastest of all teams for Loop 14 despite running with an abundance of caution. This may have been my favorite loop.

The green loop was my third and last, one I would run in broad daylight. My legs were still feeling spry with only a modicum of soreness, so when Krista asked me how I was going to run this one, I replied “I am going to try to run this one fast.”

Unfortunately I missed the first turn and had to backtrack—costing me at least 30 seconds—but once I got going I was able to knock off the first mile in 7:36. I couldn’t quite maintain that for the second mile as the route followed a gravel trail that turned upward, but still knocked off Mile 2 in 8:31.

But then the route joined technical singletrack. As with the red loop, my breathing became maxed out here and my legs weren’t feeling so hot either. So getting to the fourth mile—which was downhill but still a bit too technical to really let the legs rip—was a relief.

In this loop I caught nine runners and again avoided getting passed. My time was the seventh best for the 92 teams despite getting lost early. My running was done.

My Teammates and the Finish

Patrick had never done a run longer than five miles, and it sounded like he had completed even fewer training runs than I did during the last month. Brad likewise proclaimed himself to not be a runner, but he did do Crossfit regularly including a recent workout where he ran a mile and half carrying a 135-pound barbell behind his head. Crazy! Both Patrick and Brad got through their loops admirably without complaint or massive hurt.

Amarah and Aileen were seasoned runners, and so was Tamara who turned in a very good time for her first loop (yellow). She was, however, “scared” about running at night and she had never gone camping before. That, coupled with her serious distaste for getting dirty, made this entire adventure somewhat out of her comfort zone. I was really proud of her when she finished her second loop in the middle of the night.

Krista, simply, was a badass. Like Brad and Tamara, she does Crossfit and I’ve seen photos of her overhead pressing what looked like barbells of upwards of 100 pounds, and it turns out she has become a good runner too. What impressed me the most was her completing the difficult red loop in the middle of the night and then immediately continuing on to run the next loop (green) with Tamara. That basically made it one 10-mile-long, hilly and technical leg in darkness. In total, she ran 18.5 miles, or 3.8 miles more than the rest of us.

Aileen finished up the race for us on the red loop. Her leg was particularly daunting because it started to rain and hail during the last couple miles. You can see the raindrops in this finishing video.

Despite wearing little more than a tank top, Aileen handled the change of weather like a champ, and our team finished before 5:00 p.m. When the results were tallied, Team Bear Butts finished 38th. Not bad.

This was an extremely well-organized event with a ton of non-running activities like yoga, movies, a good dinner, massage and hammock stations, etc., and first-class medals. We had so much fun that some of us talked about running another Ragnar trail relay together next year. Maybe in Snowmass, Colorado? We’ll see.