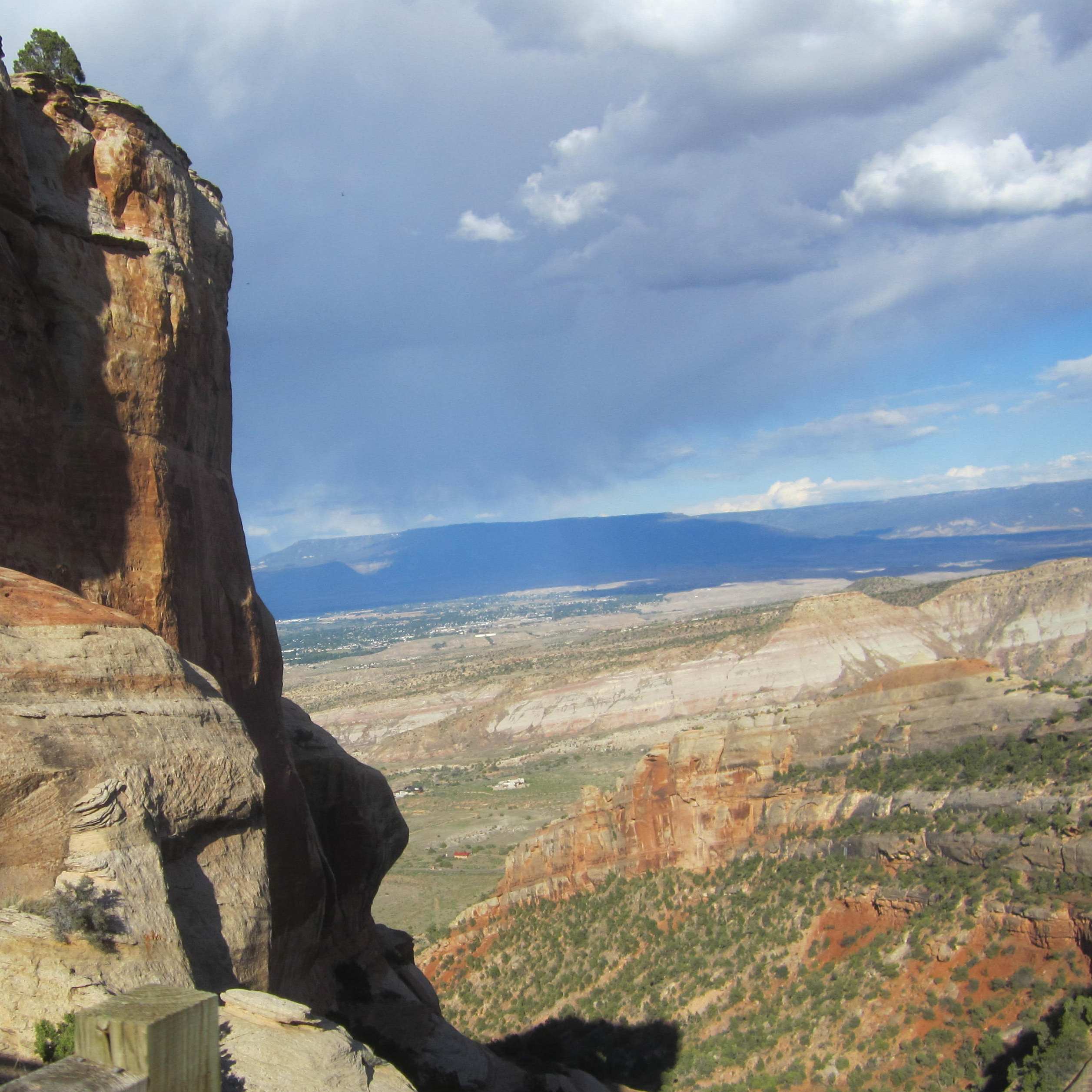 If you were to ask people in a foreign country or another U.S. state what Colorado makes them think of, they would likely say the Rocky Mountains, snow, skiing, or the Denver Broncos. Some might even allude to legalized pot. They probably wouldn’t mention too many things in the western part of the state.

But let me tell you, they should. At least that is what I conclude every time I visit that region, which is shamefully infrequent considering I have made the Centennial State my home for a dozen years. I believed that even more after riding the inaugural Grand Mesa Double Century, organized by the Rocky Mountain Cycling Club as part of its Colorado Triple Crown series.

The first 55 miles went through pastoral farmlands from Fruita to Mesa which were all so pleasant aside from a five-mile stretch on Interstate 70 (one of the only legal stretches to ride a bicycle to ride on that highway due to lack of alternatives). Fortunately, the shoulder was ample and at this sleepy hour of Saturday morning, there were few cars and tractor trailers rumbling by. After those miles, I was sitting in second-to-last place in this “timed tour,” but I was not panicking as my time split of 50 miles in three hours—or 16.7 MPH—was well above the 11.5 MPH average needed to finish before the 17.5 hour time limit. I was content to ride at my own pace, conserving energy for the first real test of the ride: a 21-mile, nearly 6000-foot climb up the Grand Mesa.

The Grand Mesa is the largest flat-top mountain in the world, and at that length of an ascent, you figure it is really going to test both your mental and physical fortitude. But I was feeling very good all the way up—despite the freezing temperatures and grains of hail falling near the summit—and caught six other cyclists on this span. It took nearly two hours and forty-five minutes to reach the top, but the expansive views of the valley to the side and the aspen ahead kept me distracted enough to make the time go by in a breeze.

At the apex, I encountered Paul Grimm, a serial adventurer I first met six years ago. He seemed to be in a minor panic or at least much dismay, explaining that a dangling jacket sleeve got caught in the rear derailleur, bending the derailleur hanger which then made it hard to shift into his lowest two gears. He was very concerned that he would have to drop out or not finish before the time cut-off. I was a little perplexed because here he was at Mile 78 with me and I was averaging well over the pace needed to make the final time limit. (At the time, I did not realize he had started the ride with two other cyclists at 4:00 AM, a whole hour before the rest of us.)

“Don’t worry,” I assured him, “it’s all downhill from here. The second half is going to be much easier.” We wished each other well and then I never saw him again—although after the ride, I learned he indeed finished 13 minutes before the 17.5-hour cutoff for official Triple Crown credit.

I completely believed my words especially after the dream-like, 22-mile descent that I coasted through in 45 minutes and reached the 100-mile mark seven hours after first clipping into pedals in the morning. Heck, there was still a whopping 10.5 hours to do the less climbing-intensive second half of the double century! Even after 110 miles, the body and mind were still feeling extremely good.

But that’s when the winds took a literal turn as I rode on Highway 50 for the next 27 miles. These were gusts strong enough to nudge you off the road were they coming at you from the side. As they were, they were direct headwinds that made forward progress almost as difficult as running through a middle linebacker, underscored by my demoralizing velocities of 8-12 MPH during this stretch.

To top it off, the temperature was now around 80 degrees Fahrenheit instead of sub-40 like at the top of the Grand Mesa. Towards the end of the Highway 50 stint, I was already rationing water and decided that if I were to pass by a store of any kind, I would stop to replenish my bottles. Alas, there were none. Worse, after the route mercifully took me east and out of the wind at Mile 137, there were still another 10 miles to the next checkpoint at the top of Kannah Creek Road.

Ten miles do not sound like very much, but one thing I didn’t realize at the time was that the road would ascend 1200 feet under direct sunlight. Therefore, it was a good thing I had started conserving water when I did—otherwise there would not have been a sip left towards the top of the climb. As it was, I was down to a single ounce of H20 with 1.5 miles to go. I was completely parched when I reached a pickup truck staffed by two friendly volunteers at Mile 147.

I immediately requested a Coke asked after they checked off my name. I ended up chucking down two ice-cold, 12-ounce cans right there. “That stretch was way harder than the Grand Mesa climb,” I reported. The understanding volunteers confirmed that the other cyclists who had passed through were complaining about the winds on Highway 50 too.

Despite the Coca-Colas, I lingered for only three minutes before I was back on the bike. The next stretch was a beautiful descent that compelled me to use the brakes a lot, but was immensely welcome since it allowed my body to recover from what proved to be the most difficult section of the day. Before I knew it, I was rolling through south Grand Junction and then arriving at a Mile 175 checkpoint before the final 27 miles of the tour.

By that time, I was feeling like I was near the end of the double century. In fact, this section would provide the most spectacular scenery of the day, even more awe-inspiring than the Grand Mesa! I had never been to the Colorado National Monument before, so I was in for a real treat.

One surprise, however, was the amount of climbing through this area. The roads through Colorado Monument cut its way through towering mounds of red rock, switching back and forth in sections, and it astonished me how the first 13 miles were nearly all uphill. I clearly had not done enough topographical reconnaissance beforehand.

Finally, I crested what was the last of the upward gradients, meaning that my work for the day was essentially over. Well, almost. I still had to get down the steep roads unscathed, a task made more difficult by being afflicted with a mild case of acrophobia induced by sheer drop-offs to the right. I was braking almost the whole way down to avoid overshooting corners and plunging into an abyss like a hapless Wile E. Coyote.

I made it back to Fruita safely and pretty much coasted into the La Quinta Inn parking lot where volunteers and other finishers were waiting. Done! 202 miles in 14 hours, 41 minutes. I was pleasantly surprised with the time considering how I felt like I didn’t exceed 60% effort for most of the day, was descending super cautiously (and thus, slowly), and was really slowed down by the winds on Highway 50 and got dehydrated on the 10-mile Kannah Creek climb. Before the event I predicted I would need 15 hours, 45 minutes today, and this was one of the rare cases where I needed significantly less time than expected.

The mere 11 minutes off the bike certainly helped with arriving here well before sunset. The Colorado Triple Crown blog even reported that I had the speediest transitions of the day.

The three mega-climbs up the Grand Mesa, Kannah Creek, and Colorado National Monument, along with the spectacular views from all three made for an epic adventure. If you ever do a road trip to Colorado, this whole region is worth the drive. Or better yet, a bike ride.