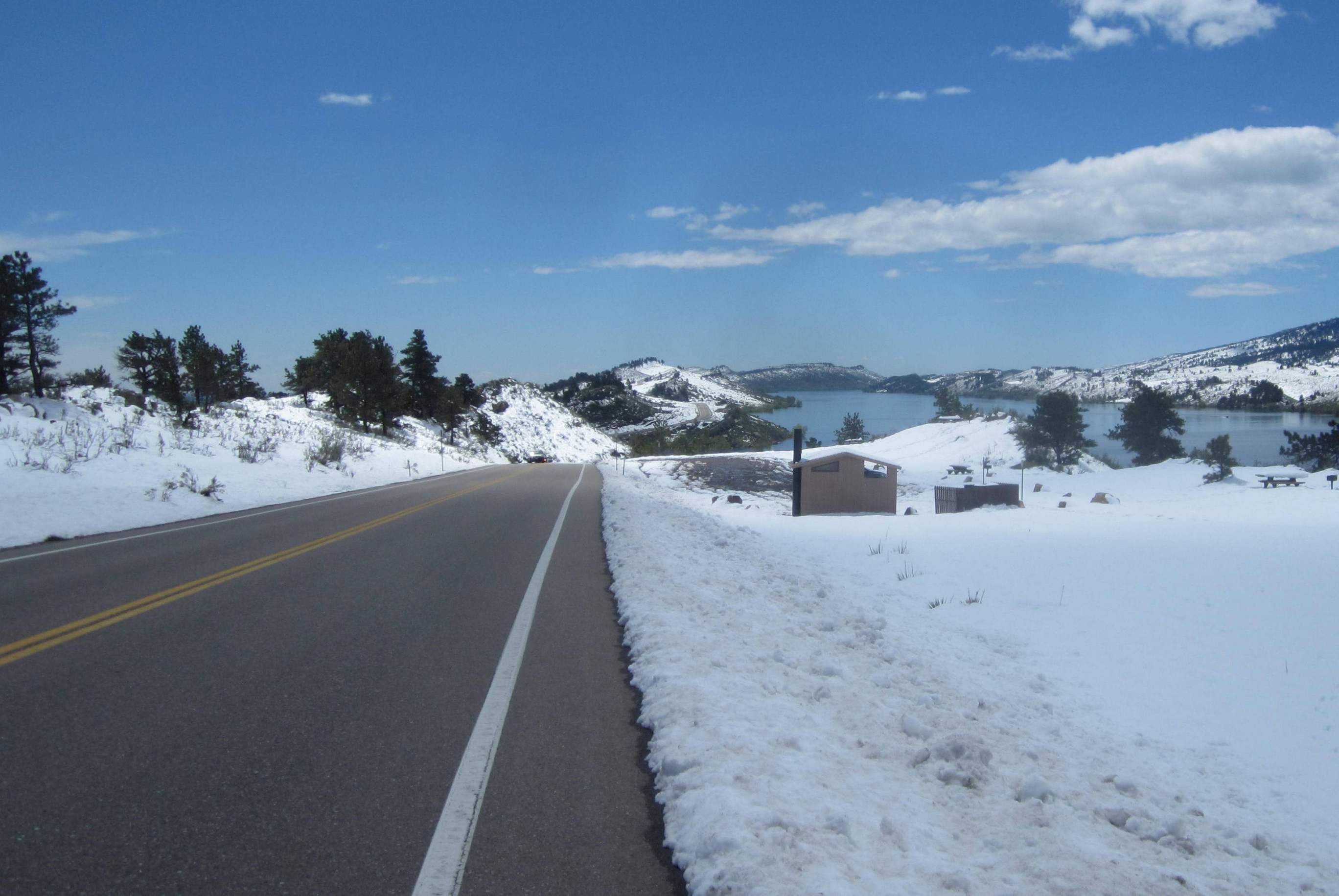 Mother Nature threw a monkey wrench into plans, again. The original intention was to join the Rocky Mountain Cycling Club for a 300-kilometer brevet, and then ambitiously turn it into a double century by tacking on an extra 14 miles. But then came the snow—during the third week of May!—that was wet and heavy enough to snap an aspen and pear tree branch in my back yard. Although the forecast alleged that the frozen flakes would stop coming down the day before the timed tour, the organizers were concerned there would still be plenty of scary-looking ice on the roads in the canyons.

So that ride was canceled and I had a whole day to do my own thing. While I was glad that I would be able to sleep in like a cat instead of having to wake up at ungodly hour before the sun rose, I had already resolved that being completely inactive on what was predicted to be the first sunny day in almost half a week was wholly unacceptable. I also had been looking forward to—a training up to—a long day on the bike, and it didn’t take long to decide on striving to ride at least a double metric century.

If I could only get out the door in time.

In fact, after spending an hour in the morning mapping out a 100-km figure-8 course that I could ride twice and stop by my house every 30 miles if need be, I rolled out onto the street on the Super Bike, which would see action for the first time in months. (I like to do the bulk of my training on my trusty Cannondale 3.0, and then switch to the Litespeed Archon—which weighs four pounds less and has a smoother ride—for more serious, ultra-distance events.) Since the predicted high temperature was 56 degrees Fahrenheit, I rode the first 100 kilometers wearing a red Novara rain jacket for warmth.

The sight of the foothills completely blanketed with snow seemed to confirm that this was sensible. But after I had crested the Horsetooth hills with a bit of perspiration slinking down the forehead and what felt to be lead instead of muscles in the legs, I had already decided that the next time I would pass by home, I would ditch the jacket. This was something I could only do after riding on the Spring Creek Trail which was congested with bicycle, pedestrian, and dog traffic. While this stretch was slow, I wanted to ride easily today anyhow and this coaxed me into sitting up and enjoying the day.

After the jacket drop at the house, I headed west and then north towards Wellington straight into the wind that was strong enough to stifle speed to a measly 10-12 miles per hour. I had to laugh because yesterday at climbing, Tori had said “at least you won’t have to worry about the wind” when we were discussing my weekend cycling plans. Good thing she is not in the weather prognostication business.

It seems like in Fort Collins, you could predict for any given day between March and May that it is going to be windy, and there would be a two-thirds or even three-quarters chance that you’d be correct.

After I rounded Wellington and had a nice tailwind that propelled me to speeds between 26-30 MPH for 40 minutes, I was on my second 100 km. By this time, virtually all snow in the prairies had disappeared to give way to lush, green pastures. Fittingly, the leaden legs of the morning also seemed to become more alive during this second figure 8. The Horsetooth hills seemed to present less of a challenge, and I was in a jovial enough mood to be whistling random songs with gusto along the Spring Creek Trail. The whistling had a desirable side effect of warning unsuspecting pedestrians that I was coming up from behind without having to resort to the oft-startling (and sometimes obnoxious) “on your left” declarations that define the norm.

Instead of dying down, the northern wind had only seemed to pick up and making my way north towards Wellington was a virtual trudge. It seemed forever—but was actually less than hour—until I was finally going in a direction to be out of it. Somewhat exhausted and tired, my thoughts started to direct towards grub.

Knowing I had almost no food at home, I decided to take advantages of services in Wellington even though they were only nine miles from home. One thing I had learned in the epic Trans Am Bike Race was that McDonald’s was a far more preferable option than convenience stores for pit stops for a multitude of reasons including:

Sometimes you even meet friendly folks of the septa- and octogenarian sort who want to talk. This was the case for me today. A guy name John came over to admire the Litespeed (“you could ride the Tour de France on that thing!”) and inquire whether I rode for a team or not. After I told him, no, I was just riding figure 8s around Fort Collins solo, he hollered over to a couple of his pals to check out the carbon fiber wonder. Apparently, they had all just done a trip to Israel. “Maybe you could ride in Israel one day,” John concluded. Maybe.

After refueling, both my spirits and body felt much better again, enough that when I passed by my house once more I kept on going to ride another 25 miles. This entailed about an hour of riding in the dark but I was well prepared with front and rear LEDs. I retraced about 10 miles of the first 100-kilometer loops before cutting over to the Poudre Trail, going all the way to Timberline Road (requiring a detour because parts of the Poudre Trail was closed due to overflow from the Poudre River) before heading back to the abode.

To make the journey an even 150 I had to do an extra lap around the neighborhood. I was home after 10 p.m., just in time for bed. I faded from consciousness quickly, just as the morning snow and afternoon wind had done so hours before.

Moto G4 phone—using the RideWithGPS app and put in airplane mode for 95% of the ride—started with 87% battery and ended with 45%.