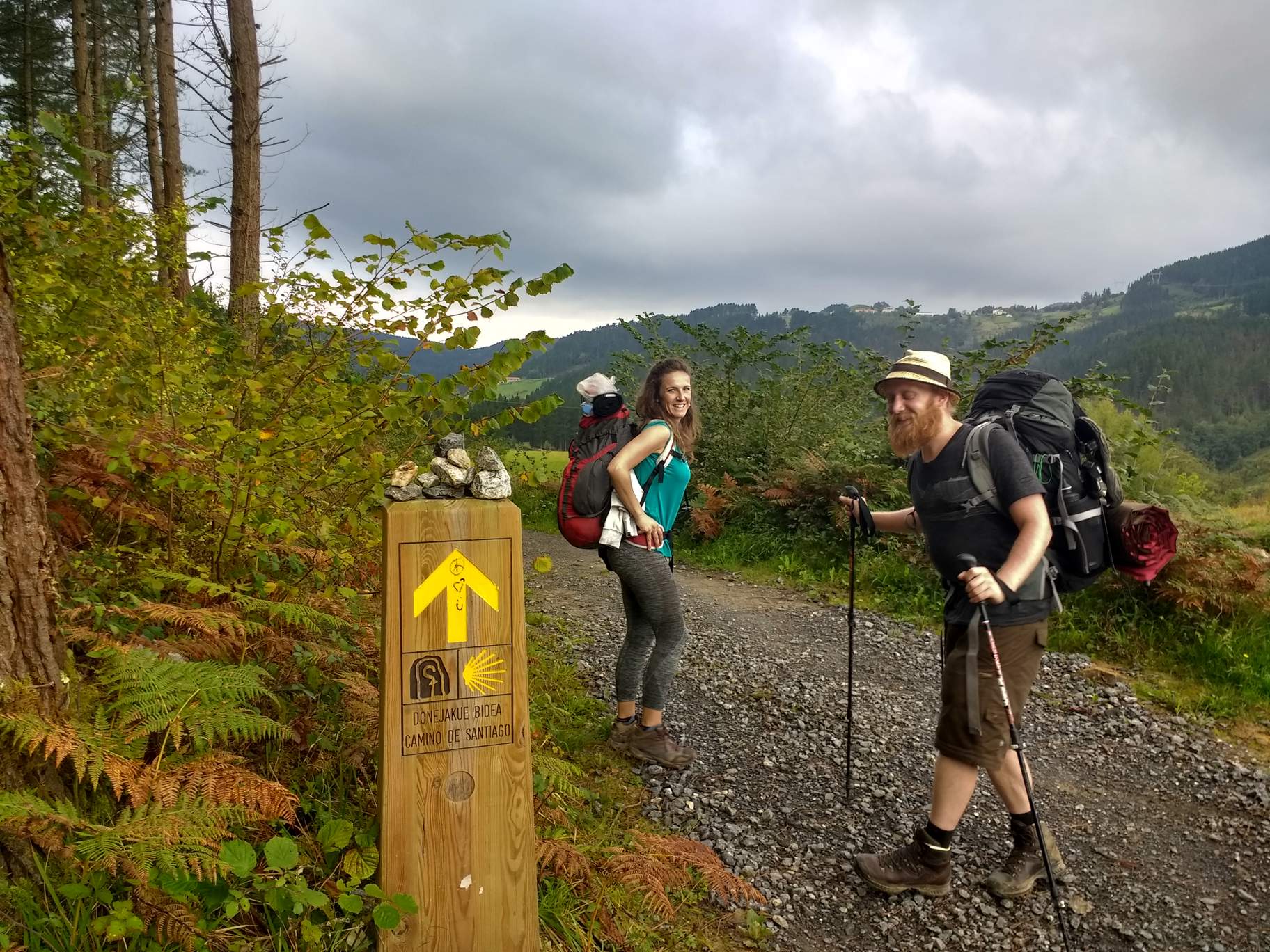 I flew from Barcelona to San Sebastián, where my friend (and Fort Collins Running Club international ambassador) Antxon picked me up from the airport. At his house, we had dinner with his wife Vicky, who cooked a delicious Spanish dinner that included Spanish omelette. We chatted in Spanish for a couple hours before getting seven or so good hours of sleep.

Antxon then drove me to Albergue de Peregrinos (Pilgrim’s Hostel) in Irún—a northeastern town right on the border between Spain and France—where I obtained a credencial (pilgrim’s passport). This was where I officially started my walk across Spain.

Below are notes I took on the trail by dictating into Microsoft Word on my Android smartphone.

Right off the bat, I started going in the wrong direction due to trying to follow the yellow conchas (arrows) instead of GPS. I learned very quickly that I needed to follow my maps. However, soon I discovered that the GPX file that I downloaded was a cycling route for the Camino. Therefore, I needed to improvise.

I also was experiencing a little “range anxiety” because I had failed to charge my portable battery pack, and I had also forgotten to charge my phone the night before. Ultimately, at a Starbucks in San Sebastian, I stopped for an hour just to charge both the phone and external battery pack.

I wanted to get this far as Zarautz, but after 8:00 p.m. I decided it would be a good idea to start looking for hotels. But all hotels were closed or completo (full), in a town a few miles before Zarautz, and I ended up continuing onto Zarautz in the dark using my phone’s LED as a flashlight and occasionally jumping off the highway for cars. Unfortunately, I had no luck finding a hotel with vacancies in Zarautz either. (Antxon would later tell me this was because it was a holiday.)

Ended up going to a bar until 1 a.m. Then I slept in an office under construction until sneaking out at 5:55 a.m. Initially I was going to sleep in a park underneath the tree, but the grass was damp and I did not want to get my down sleeping bag wet.

Overall, the route was stunningly beautiful today, especially that of the coast. But it was very hilly. I only encountered folks that were pilgrims for sure in the evening, including three Russians. I had to walk 4 miles in the dark, including on a busy highway. It was very uncomfortable and I was using my phone as a light. Ended up walking 36 miles, or about 6 miles more than necessary. I decided to try to reduce the unnecessary miles by checking Google Maps more often.

I got started at 6:10 a.m. and found a bakery right away. I learned my lesson from yesterday, in which I was starting to run out of food and drink, and stocked up early. My feet hurt, and the terrain was exceedingly hilly, especially a stretched where I used Google Maps to route me.

There were hundreds of road cyclists out on this Sunday. I was very impressed considering how hilly these roads were.

The worst part was having to walk a few miles off road in extremely rugged and hilly terrain in which I had to crawl underneath three barbed wire fences before encountering a few dogs! This was a result of following Google Maps walking directions instead of the official Camino. In hindsight, I am sure the official Camino did not go on these trails.

Found a pensión (private hotel) at 6 p.m. with the help of a boy. After calling the owner named Ana María, she came over and I rented a room for 45 euros and washed my clothes before searching for dinner. I went to the only restaurant in town and was initially turned away at 7:45 as an employee said it was too early for dinner. She said to come back at 8:30 p.m.

Again, I attempted to follow Google Maps to do the shortest distance between towns. I ended up hiking along a highway until a Spanish driver stopped me, insisting that I was off route and that I should have turned five kilometers ago. At first, I was both skeptical and hesitant, but he seemed to be certain and eventually I trusted him. He drove me back to point he said I should continue.

At the drop-off point, I immediately encountered several pilgrims, confirming the driver was right. I met Jacob of Germany, Maria of Spain, Jonathan, and Shahal of Israel. All of them had started in Irún a couple days earlier than I. I then asked them how they were navigating, and they said in addition to following the yellow arrows, they were using the online maps on caminodesantiago.consumer.es. From this point on, I was able to navigate the official Camino del Norte route with confidence.

Later in the day, there was lots of rain to the point where some of the trails were nearly flooding. At one point I was using a tree branch as a walking stick to help avoid falling. Otherwise, I stayed comfortable and dry, thanks to the umbrella I brought.

I walked many paved roads in the dark before getting to some steep and muddy trails north or Bilbao. In Bilbao, I stopped by stores to resupply, including buying a European power adapter for 2 euro (I had lost mine in an AirBnB the other week) and three pairs of socks since mine had all developed holes in them.

I got lost three times, including very steep sections that I had to backtrack on southeast of Bilbao to cross a river.

Past Bilbao, I got onto a recreation trail that many people seemed to be walking on after work, often carrying grocery bags. Many of them were walking fast and for several miles.

As I approached Pobeña, some runners from a running club passed by me. When I reached Pobeña, there were lots of surfers walking the beach or paddling in the water. I stopped here for a while before continuing another mile to stay in an albergue for the night.

I was more or less sleep walking during the morning and it was cold enough that I put on the rain jacket for the first time during the camino. I then took what appeared to be short cut, but the yellow arrows pointing the way were incorrect. It let me into a tunnel and threw a very small hole I had to crawl out of. It was kind of like a booby trap.

Then I met Spaniards Jorge and Rebecca. Jorge was in Colorado two weeks ago, during a western road trip, including stops in Los Angeles, San Francisco, and Las Vegas. Jorge and Rebecca stopped in Castro while I carried on.

I successfully took shortcuts twice, including a quarter-mile section that did not show a road or trail on Google Maps, but I guessed correctly and found a footpath. It saved a couple miles by going that way.

In Laredo, I found and called a pension where a woman allowed me to check in. However, she failed to get me any keys for three hours, and by the time she did the nearby supermarkets had closed. But I least the place was comfortable and inexpensive: only 25 euros.

After hiking for a couple miles, waiting an hour for a ferry, and crossing a bay on the ferry, I met John and Karen from the UK. John was an avid trail runner, including doing the 100-mile Ultra Trail du Mont Blanc. He’s also done a couple Ironman triathlons in Nice and Zurich. Last year he and Karen crewed for a Race Across America (RAAM) team. They had only six crew members on their team. John told me about the movie Isabella which takes place in Oviedo.

After taking a shortcut on Highway N-141, I arrived in town at 2:18 p.m. Unfortunately, all the shops were closed at 2:00 p.m. That included a supermarket, bakery, and a chocolate store. I ended up stopping by a bar and having a Coke and ice cream bar for lunch.

A couple hours later, I met Thomas from southern Germany at the ferry station to Santander. He was a very nice guy and he told me about how his son was working at the BMW plant in Spartanburg, South Carolina. We walked together to Pensión Isabel in Santander and rented a two-bedroom room for 17 euros each. Then we went to dinner at a place called Fun & Food. I ate a very good pizza there.