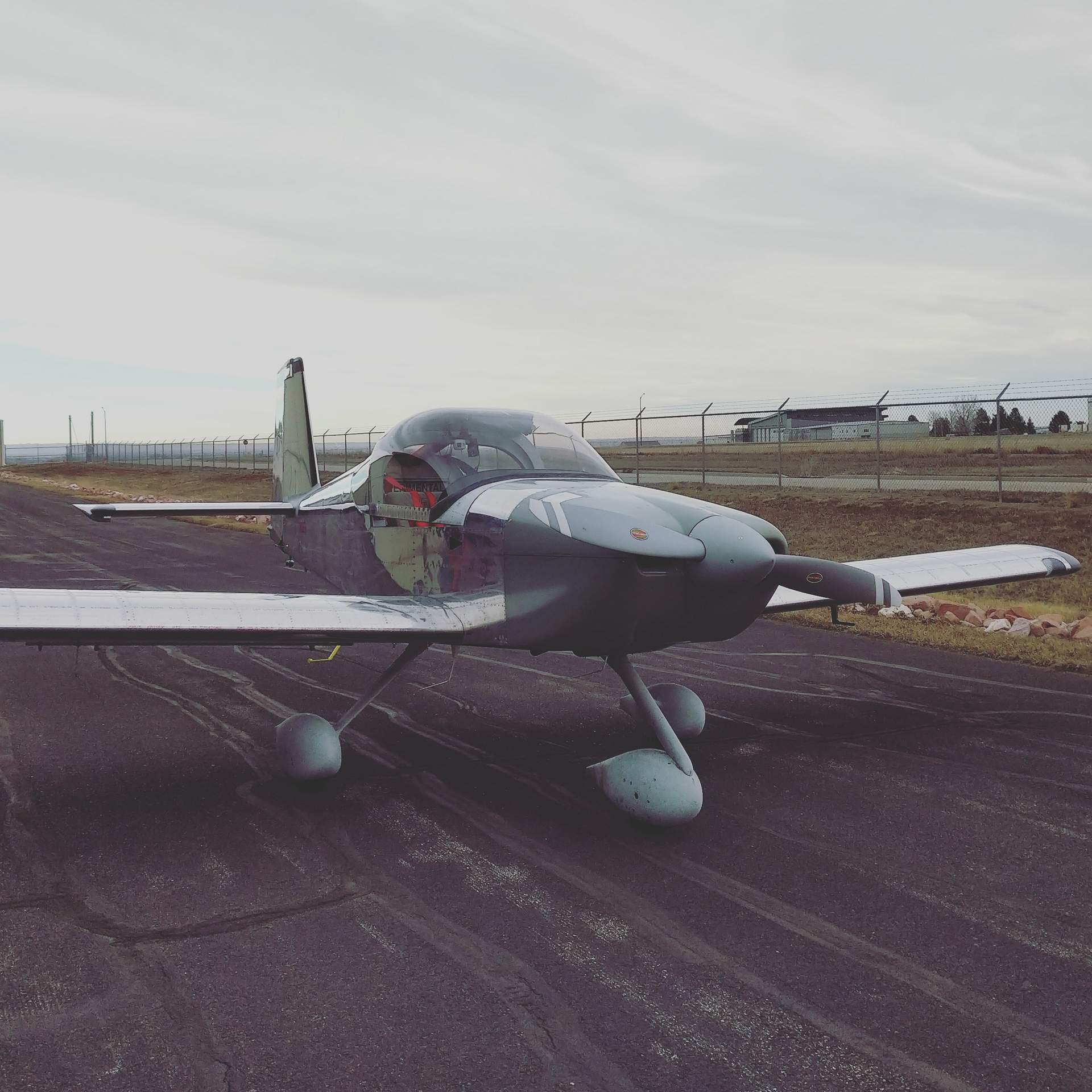 “The only reason why I bought a bigger house,” said my friend E a couple years ago, about a couple months after we first met, “was to finish building an airplane.”

At first I didn’t know what he meant by that, but when I went to visit him one day, it was self-explanatory. Airplane parts occupied half the rooms in the house! For example, the wings were in the living room,

the fuselage was in the garage (shown below with my motorcycle when I needed to make an emergency repair while in south Fort Collins),

and the empennage (stabilizers for the tail) were in an upstairs bedroom. Lots of spare parts—included discarded ones because the kit manufacturer, Van’s Aircraft, made a CAD/manufacturer error—were in the basement.

When I went to visit E, he had already spent upwards of 4000 hours and $120k on the above parts and more, such as the instrument panel he designed himself. They were ready to be bolted together to make a fully functional plane—if only he had a hangar. Airplane hangars, apparently, are in short supply in northern Colorado, and E was on a waiting list for years before he could finally close on one. That was sometime in late 2017. Then, he had the fuselage, wings, etc., towed over to the hangar on a flat-bed tow truck, where he was able to do the final assembly.

After that was certification, which included an initial test run and then 40 hours of flight time before he was allowed to take up any passengers in it. Remarkably, his plane worked the very first time he tried to take off in it! That was super impressive to me considering that after rebuilding and installing the engine in my former MGB, it was not road-worthy for a couple weeks after I tried to start her up because of miscellaneous “problems” I had to diagnose—and everything else aside from the drivetrain in the car had already been tested and proved working. It’s a testament to E’s intellect and diligence that the plane worked virtually flawlessly when he had it on the runway for the first time.

Nearly a year later, he had taken a lot of friends up—and they all survived. Subsequently, I was keen to fly in E’s plane despite the all-caps letters reading “EXPERIMENTAL” on the wings or this warning plaque on the instrument cluster:

So on one December Saturday, we went over to E’s hangar, rolled out the plane, and went over some of the flight protocol, including how to climb into the cockpit. The latter entailed stepping on a particular safe section on the wing near the fuselage; stepping elsewhere could damage the wing’s aluminum skin and literally make the plane un-flyable.

Then we flew over to… Nebraska. Kimball, specifically. It didn’t take very long—maybe 45 minutes. Contrast that to when I rode a bicycle to Nebraska last july, and that took nearly seven hours. The power of flight!

In Kimball, we gassed the plane up, which not too much different from pulling into an automobile gas station, except there was just one gas pump at the Kimball airport, and it required uncoiling a long gas hose. Aviation fuel is also more expensive than car-grade fuel.

Then, we flew over to Greeley… and E let me fly the plane! Well, mostly. It mostly involved keeping the plane at a steady elevation and bearing by applying micro-movements to the aircraft joystick. I’m happy to report I was able to successfully fly the plane without instigating a stall, a roll, or a deep dive, and that we didn’t die.

In Greeley, our friends Manuel and Nate met us for lunch. Manuel took E and I in his Acura to go to an Indian restaurant.

Lastly, it was back to the hangar—but only after we flew over my neighborhood:

and then Horsetooth Rock:

It was a unique experience to be in this two-seat, homebuilt aircraft. Definitely got a different perspective of where I lived for sure.

You can sort of get a sense of what it was like from the passenger seat in the video I created, below.