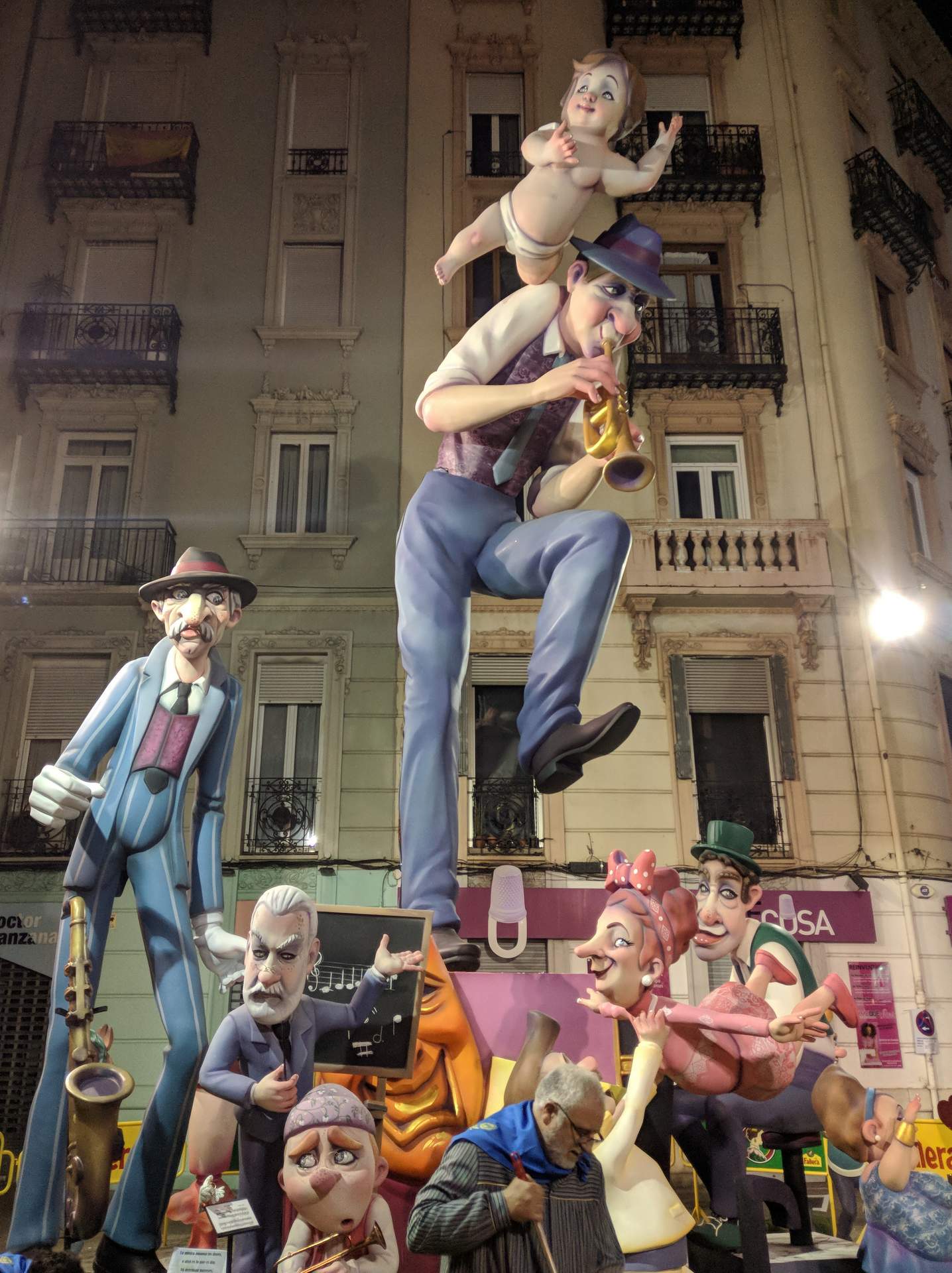 “Thinking of either staying in Spain to see Seville and check out the festival in Valencia, or going to Amsterdam for a couple of days,” messaged my friend Emily while we were both in Barcelona one evening by coincidence. Turned out she jumped on an impromptu flight to Amsterdam the next morning, but it got me wondering: what is this festival in Valencia?

A quick internet search returned that it was only, oh, one of Spain’s most famous festivals that has been going on since the Middle Ages. In its current form, it’s a four-day festival on March 14-18 where giant fallas are constructed in virtually every neighborhood, then burned on the final night—supervised by the fire department, of course!

What are fallas? This excerpt from Wikipedia explains. (Note: the words in italics in the excerpt are in Catalan, and the English appears to be British English. Falles in Catalan is fallas in Spanish.)

The ninots and their falles are constructed according to an agreed-upon theme that has traditionally been a satirical jab at whatever draws the attention of the fallers (the registered participants of the casals). In modern times, the two-week-long festival has spawned a substantial local industry, to the point that an entire suburban area has been designated the Ciutat fallera (Falles City). Here, crews of artists and artisans, sculptors, painters, and other craftsmen, all spend months producing elaborate constructions of paper and wax, wood and polystyrene foam tableaux towering up to five stories, composed of fanciful figures, often caricatures, in provocative poses arranged in a gravity-defying manner.

Each of them is produced under the direction of one of the many individual neighbourhood casals fallers who vie with each other to attract the best artists, and then to create the most outrageous allegorical monument to their target. There are about 750 of these neighbourhood associations in Valencia, with over 200,000 members, or a quarter of the city’s population.

During Falles, many people wear their casal faller dress of regional and historical costumes from different eras of València’s history. The dolçaina (an oboe-like reed instrument) and tabalet (a kind of Valencian drum) are frequently heard, as most of the different casals fallers have their own traditional bands.

It was intriguing enough that I decided to hop onto a high-speed train from Barcelona to Valencia—Spain’s third largest city—later that week. I arrived Friday, which on this year happened to be the second day of Las Fallas.

The first thing I did after checking into my hotel was go for a run in Turia park, which used to be a river bed.

That was a good call. In addition to getting in a lot of quality uninterrupted miles, I got to see perhaps Valencia’s most famous architectural marvels at the City of Arts and Sciences. There were also many marching bands around that area as part of the celebrations.

When I got back to the hotel, it was already dark and that urban adventure should have already been sufficient for that evening. But while perusing the local Meetup.com groups while eating dinner at James’ Poke & Beer—an excellent poke restaurant near the hotel—I noticed that there was an intercambio (language exchange) later that night.

Heh, only in Spain would there be a language exchange, at a club, at an hour when most Americans would already have been in bed for at least an hour. The night was young, after all.

So I hopped walked over to the metro, took the subway over to a point that was about 1.5 miles away from Club Mya, and walked the rest of the way. The only problem: despite using Google Maps, I could not find the club. I wandered around for about 20 minutes looking for it, and I was not the only one doing so since another person came up and asked me if I knew where it was.

Finally, I asked a local. He pointed at it. Apparently, I had walked by it at least three times. “Cerrado,” he said. Closed.

I later learned that the event was canceled, but the organizers forgot to delete the event from Meetup.com. Too bad, it would have been fun.

But at least it got me out to wander the streets of Valencia until 1:30 a.m. As with everywhere I’ve been at in Spain, doing so was perfectly safe, as the crime rate in Spain is about an eighth that of the United States. The atmosphere was electric, with lots of people wandering into and out of shops, down the streets, laughing with their friends.

Never mind that during Las Fallas, Valencia sounded like a war zone, with explosions going off every minute or so. Mostly the snap-crackle-pop noises were caused by bang snaps, or small novelty fireworks that make more noise than do anything else. They were thrown by kids (I even saw some throw them a few meters away from the feet of policemen) and reminded me of being in Guatemala during the holidays.

In fact, the next day at 2 p.m. was Mascleta, when Very Loud fireworks go off in the city. I was about 2.5 miles away from the epicenter, and I could still hear them.

The rest of my short time in Valencia was mostly walking around, admiring the fallas, eating churros.

In hindsight, I wish I was more adventurous about trying Valencia cuisine here. Paella, for instance, was invented here. At least I had paella only a couple days before in Barcelona on Pi Day, but if I had done better research ahead of time, I would have tried to find some of the items listed in this Wikipedia article of Valencian cuisine.

Oh well, that happens when you are pretty much just traveling by the seat of your pants. Maybe next time.