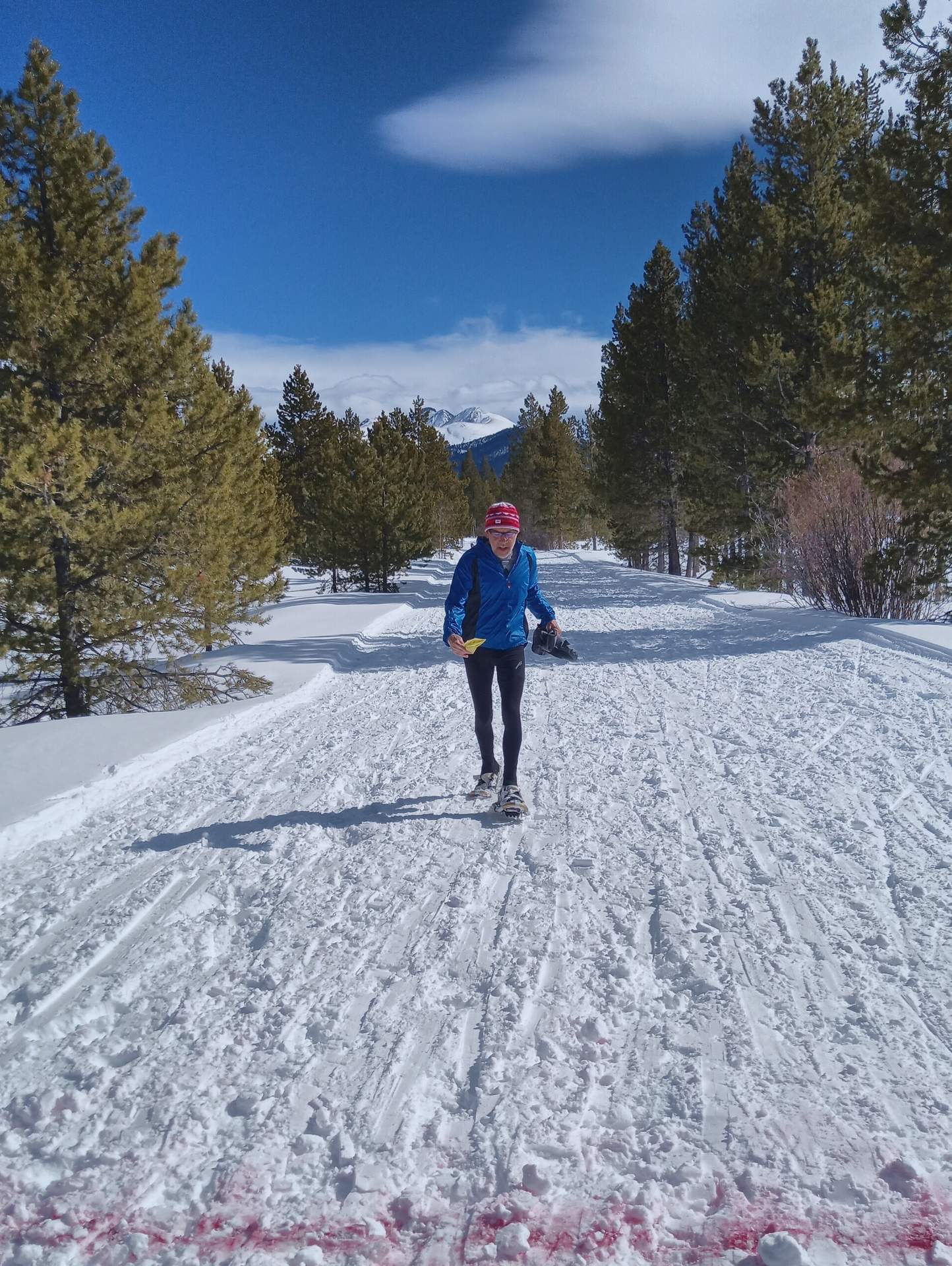 When I clicked “Buy now” for a pair of Redfeather Race snowshoes back in 2006, I was envisioning doing a running competition with them. Colorado, after all, is an outdoor recreation haven for runners and winter sports fanatics, and there are always at least a handful of snowshoe races during the more frigid months of the year.

So it is kind of odd that in the 14 years since receiving those snowshoes in the mail, I hadn’t done a single race with them. But then my friend Mel posted a flyer about the Gould Ski Scramble and Snowshoe Stomp on Facebook, and Manuel asked me if I wanted to do a scenic drive one of these weekends—much like we did last February in our respective sport/luxury machines.

“That’s it,” I told him, “let’s drive to Gould for the Snowshoe Stomp!” To get there would entail see-sawing our cars’ steering wheels through the winding Poudre Canyon, and on the other side of Cameron Pass we would get to see the snow-capped Rocky Mountains from afar. And it would give me a chance to do a snowshoe race for the first time ever. Sounded like a good Saturday morning to me.

Mel ultimately could not make it to the race, so Manuel and I headed out in caravan fashion from my house at 9:00 a.m. Traffic was light which allowed us to exercise the tachometer of our internal combustion engined vehicles like the dial on an old-school rotary phone, and most of the slower moving autos kindly pulled off the road for us when they could—not that we were carving through the canyon at felonious velocities. Generally, I was pretty careful not to exceed the speed limits by more than 10 mph, lest we get surprised by a revenue-enhancing law enforcement officer and slapped with a menacing post card-sized piece of paper listing our acts of malfeasance.

A half-mile beyond Poudre Falls—or about 10 miles before the top of Cameron Pass—I pulled off the road and got out of my silver Audi TT Roadster. Manuel did the same in his silver Acura Cl coupe.

“It sure looks different than when I biked up here on the Huffy,” I continued. “Or the last time I was here, when Alex and I rode motorcycles to view the fall colors.”

Then a hysterical thing happened. On cue, a green late-90s Buick sedan passed us… with Alex behind the wheel. Our friend Wes was riding shotgun. I did not, however, realize it was Alex and Wes even after I resumed driving on the highway and was directly behind the Buick. The driver (Alex) rolled down his window and motioned me to pass, which I did. And I still didn’t realize who was in the car.

But Manuel did, so he hung back on the road with them while I sped up the highway. Eventually I stopped to wait for Manuel and he clued me in to our friends sharing the road.

Moments later, we were all pulling into a snow-covered parking lot. Made it to Gould.

“I didn’t even know you were coming here!” I exclaimed after we hopped out of cars.

Turns out Alex was racing in the 10-kilometer skate ski division, and Wes was trying his hand at the 5-kilometer classic ski race. Meanwhile, Manuel was hanging back inside the Gould Community Center to do some graduate coursework.

The start times for the different divisions were staggered, with the skate skiers going first, the classic skiers starting second, and the snowshoers bringing up the rear. The course was groomed, meaning that the snow that otherwise would have amounted to several feet was compacted by snowmobiles, making the terrain a lot faster to traverse than if the snow was fresh and loose.

The staggers were only a few minutes, and not long after commencing the 5k Snowshoe Stomp I found myself backed up behind some classic skiers on the uphills. Eventually I got past them and then I focused on chasing two snowshoers in front of me. (Apparently there was one more snowshoer in front of us who ultimately finished first, but he must have took off so quickly that I never saw him.)

The one immediately ahead of me employed a run-walk strategy. When he was running, he seemed to be much quicker than I, but after 1.2 miles he started walking a lot more. Eventually I ran past him during one of his walking breaks.

Then, whoosh! Alex whizzed by me on his skate skis shortly after the 10k course converged with the 5k course. He was really moving. He would later tell me that he grew up in Minnesota where everyone skied, and he picked skate skiing since it “seemed less boring” than classic cross-country skiing. I think he ultimately finished first in his division despite overshooting a turnoff to the finish line and skiing extra distance.

The other snowshoer visible in front seemed to have a pretty big gap on me and I planned on doing an all-out sprint with three-eighths of a mile to go. I kept looking at my Garmin forerunner to give me an indication of when that might be, but after 2.6 miles there was what appeared to be The End only a few dozen meters ahead. The half-dozen people congregating there was the tip-off.

“Is that the finish line?” I shouted.

Upon receiving and affirmation, I then sprinted a whopping twenty feet. Done. Hmm, not quite five kilometers.

But despite the course being a half-mile short, I was happy with my first snowshoe race. I’d definitely do it again—but next time I’d take off faster and do a finishing sprint a whole lot sooner.