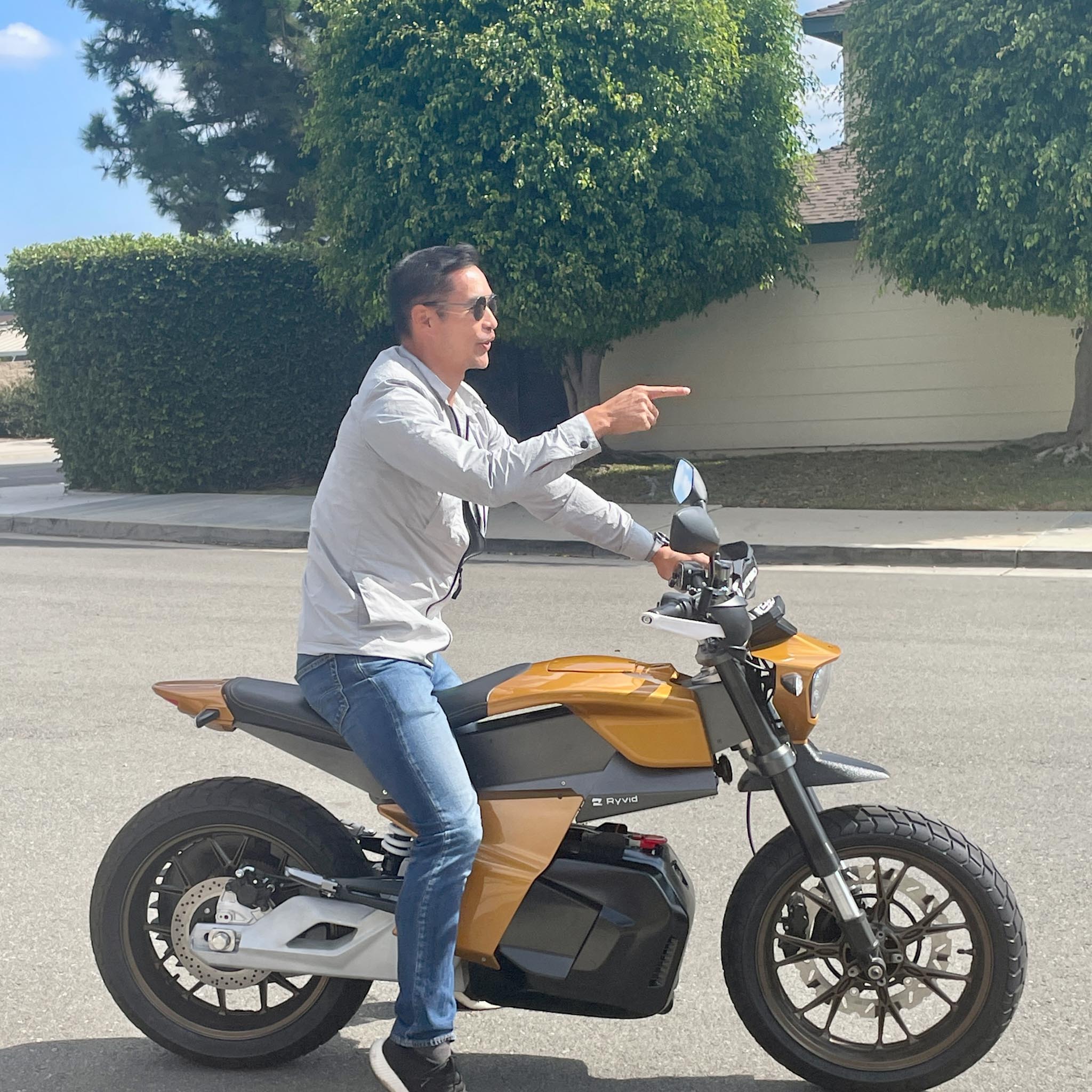 I had already been advising (without pay in compliance with the terms of my non-lucrative residence visa of Spain) a Southern Californian electric motorcycle startup called Ryvid for a good part of 2022. During a conference call, I mentioned to one of its co-founders that Andrea and I were visiting California in September.

“You should stop by if you can,” Vinh mentioned. “You could even ride one of our prototypes.”

Of course, I was interested in doing so. My fascination with machines on wheels dates back to when I was six years old–an age when I started doing things like fixing my cousin’s bicycle. Electric vehicles intrigued me enough to volunteer as a co-pilot for Drive Electric Northern Colorado eight years ago.

It was one thing to look at CAD models on a computer screen. But it was something else to see, feel, and experience a design in person. So we made time to swing by Huntington Beach. There, Dong–CEO and another co-founder of Ryvid–personally gave me a tour of his town on Ryvid prototypes.

The week before, I had ridden my Buell Blast in Colorado to remind myself what I loved about the motorcycle. It would serve as a good reference point for my test drive of the Ryvid Anthem.

In some respects, the two were similar. They were sportbikes that were “naked” or without full fairings. Both were featherweight, although the Ryvid was astonishingly even lighter: much less than 300 pounds versus the Buell’s dry weight of 360. (The production model may be even lighter; the weight and strength is something I am helping to optimize.) Despite their low mass, they had the presence of a bigger bike.

Style-wise, both looked futuristic for their respective eras. Both were good-looking. Perhaps you’d prefer the styling of the Ryvid if you dig the sharper, modern creases of, say, a contemporary Chevrolet Camaro. One of the characteristics of the Anthem unique to the motorcycle world is its riveted and bonded, folded sheetmetal chassis.

I looked at some individual bits lying in Dong’s workshop before we wheeled a prototype out into the California sun. The seat frame was so lightweight that Andrea could comfortably pick it up with one hand. The 65-pound battery pack could be quickly disconnected and wheeled out–a boon to prospective Ryvid owners who didn’t have a garage or external outlets to recharge their motorcycle.

What interested me the most, however, was how the motorcycle rode. I had never ridden a two-wheeled electric vehicle before, and I expected it to drive vastly different than a gasoline-powered one.

The seat position felt similar to other sportbikes I have sat on. At first, it seemed closer to that of a Ducati than my Buell, which I can flatfoot despite having the standard instead of the shorter seat option.

But one of the innovative features of the Ryvid is its adjustable seat height. You can press a button on the left side of the handlebars to raise or lower the seat. I could even do this while the motorcycle was in motion. It can easily accommodate shorter or taller riders and is conducive to lending the bike out to friends or family members of varying heights.

On the street is where the Ryvid impressed me the most. I anticipated the bike to be less “fun” than my Buell Blast for these reasons: electric vehicles are quiet and typically don’t have transmissions with multiple gears. The noise and gear-shifting are part of the theater that make riding a motorcycle so thrilling–just ask any Ducati or Harley owner. So surely the Ryvid would feel more sterile.

Or so I thought.

The electric motor’s instant torque made me an instant believer. No longer did I have to make sure that I was always in the right gear or un-clumsily modulate a clutch. You simply twist and go. Notwithstanding the ease of operation, the instant acceleration provided enough drama to be fun.

The Ryvid was notably responsive at low speeds or from a standstill. Yet, it was powerful enough to go highway speeds. I know this because Dong led me onto the interstate for more than a few minutes.

Another thing that was smile-inducing was the bike’s handling. It felt very agile. I suppose this is due to its light weight and low center of gravity. Its heaviest component–the battery–is also the lowest.

As we pulled back into Dong’s driveway at the end of the tour, I wore an ear-to-ear grin.

Indeed, after riding the electric motorcycle, I had a different perspective on gasoline-powered ones. I couldn’t help but think of them as noisy, somewhat toxic (their emissions), and unrefined. They are also higher maintenance. An electric motorcycle never will need oil changes or valve adjustments.

The internal combustion engine’s trump card has always been range. Ryvid’s estimate on the maximum distance its motorcycle can go on a single charge is only 75 miles, for example. That would be an issue if you wanted to ride across the country.

But realistically, most motorcycle riders aren’t riding nearly that far. When I think of my Buell, I start looking for gas stations after 100 miles. Seventy-five miles is plenty for most people to go to work and back or to run errands around town.

Commuters are one group of consumers that Ryvid is targeting. I think the company has a shot with them, especially with the eyebrow-raising price of only $7800. That is less expensive than many electric bicycles.

Ryvid has already started taking pre-orders, with the first deliveries scheduled for summer 2023. If you are interested, be sure to visit ryvid.com.