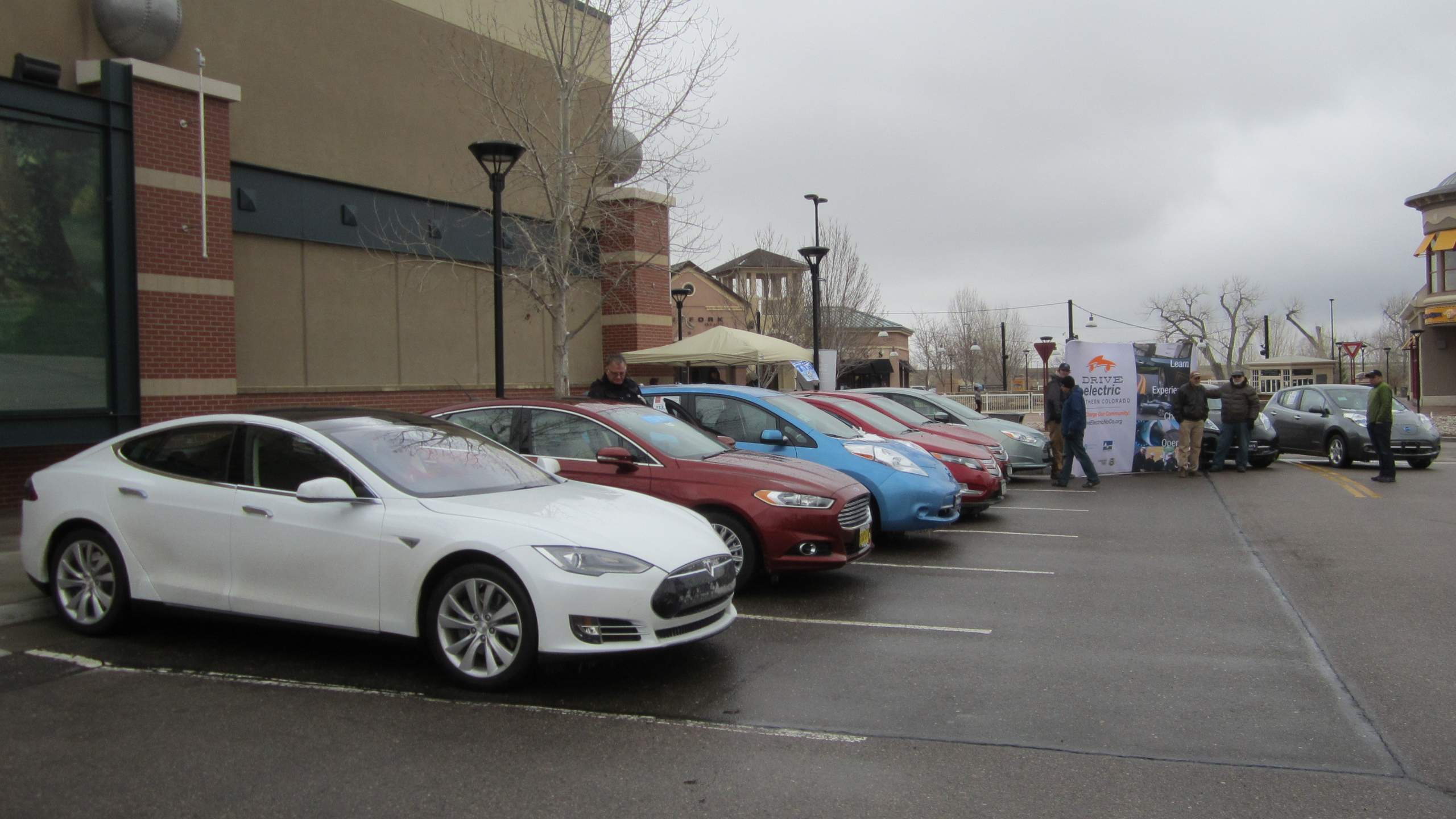 The Electric Vehicle Test Drive of April 2013 must have amped me up for an oil-less vehicular future, as this year I have been volunteering as a co-pilot for events held by Drive Electric Northern Colorado. DENC is a non-profit organization that is trying to “develop electric vehicle ecosystems that will make ownership of an electric vehicle simple, convenient, attractive, and cost effective.” As a co-pilot, I help educate the public about one of my favorite topics (automobiles) and get a first-hand look behind the latest and greatest technology while going for a casual cruise around the city blocks of Fort Collins.

My first event was at Centerra, a newish “lifestyle mall” in nearby Loveland. That day was particularly frigid with enough wind and light snow to make us quake in our boots. Fortunately, as a co-pilot I got to spend a lot of the volunteer time inside the electric vehicles, particularly the Nissan Leaf which was the primary vehicle I was the escort in. The Tesla S—with its futuristic dash (replete with a tablet screen for its center stack measuring 17 inches or so) and power upwards of 400 ponies—was the bona fide star of this show, but we also had some Chevy Volts, a Ford Focus EV, a Ford Fusion Energi plug-in hybrid, and Ford C-Max conventional hybrid on hand too.

The next event I volunteered at was on Earth Day at Fort Collins’ Civic Center Park. We had all the above vehicles again except for the Focus EV, but the main attraction was a pre-production BMW i3 that Marissa, the marketing director of the Fort Collins’ BMW dealership, brought over.

I had last seen a prototype of this car in a BMW dealership in Paris, so it was a delight to finally see one of these on the streets of the good ol’ U.S. of A. The i3 is currently so rare in the States that she was directed not to allow anyone except for the most serious buyers to test drive the car, but she did take me for a spin around the block. It’s a funky (maybe frumpy) looking vehicle, but I appreciate its non-cookie cutter styling, including suicide doors, floating dash pods, and eco-friendly materials including bamboo and recycled plastics. The body and much of chassis is made of carbon fiber, which enables a low weight of just over 2600 lbs.—about the weight of a Mini Cooper. That the base price of an i3 ($41,000) is about the same as a Chevy Volt and Ford Fusion Energi is also very impressive, although I realize all of those are very different vehicles aside from being plug-in hybrids.

Aside from the i3 and (of course) the Tesla, my favorite of all the EVs has become the… Leaf. Not only is it the most affordable at $30k (before federal + state tax credits of up to $13,500), but being all-electric it is the simplest. It also has a lot more room inside than the Chevy Volt, which felt absolutely claustrophobic in comparison despite being an outwardly larger car.

The Leaf can also sit five people instead of four like the Volt, and can hold a lot more cargo with its hatchback configuration. The Volt, of course, has an advantage of not giving its drivers range anxiety due to having a petroleum-powered range extender, but the Leaf requires no oil or coolant changes due to not having an internal combustion engine on board.

For about a year the Leaf had a near-monopoly on the low-end all-EV market (and as of this writing, is the best-selling EV of all time with 100,000 sold worldwide), but there are slowly being more options, particularly in California. Electric vehicle versions of the Chevy Spark, Fiat 500, Honda Fit, and Smart Car come to mind.

Unfortunately none of them seem to have made it to Fort Collins yet, but when the DENC is able to get some to come to its events, you can bet that I will be there as a co-pilot as well.

That looks exactly like the white Tesla I see in my neighborhood! This was a fun write-up. Thanks for sharing. ↩ Reply