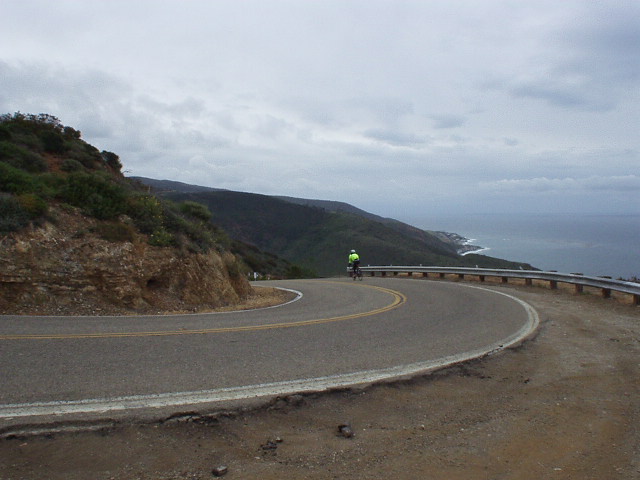 “This course can best be described as dramatic, epic, diverse, and beautiful,” proclaimed the website of Planet Ultra, the organizer of this ride. “More difficult than Heartbreak,” suggested another cyclist who had done both rides in the past.

Fortunately, for one who has not been training very much in 2004 and who had been sick all week, the latter turned out not to be the case. The former, however, was right on.

I took Friday off work to drive down to Malibu, slept in my car in a school parking lot near the official start of the ride, and started with over 100 others at the 5:00 a.m. mass start. Wearing neoprene booties, full-fingered gloves, 2 jerseys and arm warmers (with a wind-breaker and balaclava handy just in case), the morning temperature was comfortable, especially while riding southbound on Highway 1, the Pacific Coast Highway, by the bungaloos overlooking the crashing ocean waves not far below.

The story was a little different after ascending up to the world-famous Mulholland Highway. This ascent began at Mile 7 and already by this time I was one of the last people on the course. Here the weather was notably damp–not drenching, mind you, just drizzling–with stunning mountain vistas abound and virtually no motoring traffic for the first 50 miles. What a wonderful contrast to the Hemet Double of just two weeks prior.

After this stretch of highway was perhaps the highlight of the ride–a breathtaking, 11% plunge down Deer Creek Road to the endlessly blue Pacific Ocean. Then we’d go northbound up the Pacific Coast Highway to Ojai for 30 miles of virtually flat, but very windy, cruising past notable landmarks like the Missile Park near Ventura and the Channel Island Harbor.

The climbing resumed in Ojai and after lunch, climaxing in a new-for-2004 climb: Balcom Canyon Rd. This was a 22% grade towards the top.

Fortunately, the steep section is just .6 miles long, and hence didn’t feel too bad. I stayed relaxed and seated most of the time concentrating on applying force at each part of the pedal stroke, only popping out of the saddle when my cadence in the lowest gear of 32 X 23T fell below 20 rpm or so.

Not to long after Balcom, the course began to head south, including down the Pacific Coast Highway again, culminating in the first significant tailwind of the day. Hence the 10-mile stretch down the PCH was very pleasant, being able to sit up and just relax.

Of course, afterwards was back up to the Mulholland Highway again. This was particularly spectacular with the morning clouds now gone and a dawning western sun just over the horizon. The sun began to reach for its nadir as I ascended perhaps the most significant climb of the day–a 3.5-mile ascent up Stunt Rd. at, perhaps, a 6-7% grade. My nose sniffing all day but my body feeling pretty good by this time, this would be the first time I tried to push a little harder. By the time I reached the top I was definitely breathing harder than any other point in the ride, but it would be almost all downhill from here.

Unfortunately, I did not achieve my goal of getting to the “cold, dark.. gnarly, twisty, narrow” and “mind-boggling” descent (as warned by Planet Ultra) before the sun was entirely down. Fortunately, I did bring two of my five-LED Cateye headlamps, which were much appreciated (and yet barely adequate despite being very bright) while descending with another guy riding right behind. We were braking the entire way, it was that dark and steep. A few miles later it was back to the Pacific Coast Highway and Malibu. Lots of cars were out in Malibu by this time, but this coastal town with all of its lights along the crashing waves was still a joy to ride through.

Just before 9:00 p.m. I rolled into the finish, where Chris Kostman and Deborah Kaplan, the friendly Planet Ultra hosts, were waiting. Also there was Brian Bowling, who I had met at Paris-Brest-Paris last year. It was really good to see them all. Despite the lack of a full post-ride meal in the tradition of Planet Ultra, I have to say, I am beginning to really respect and admire the way Planet Ultra runs its rides. The rides are “no-frills” but well-organized and highly efficient (in its use of volunteers and resources). The emphasis is more on the ride and not on the food–perhaps the way it should be. The Mulholland Double, for example, was a huge contrast to Hemet… as I’d remark to Chris and Deborah at the finish, “this is probably the most beautiful California double there is.”