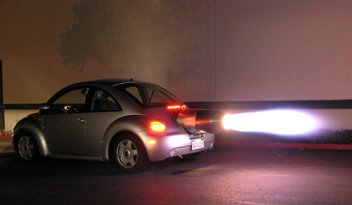 Nice blog. Of course I'm the same Ron P who was Stanford in the 80s. I still stop by every now and then looking for people to hire for my company ECM. Pictures of the car are now parked at www.ecm-co.com/jetbeetle/. So you can mention that site in your"References" section.

You saw this on the front page of Sunday's San Francisco Chronicle?

Great post! I have a picture of a classic beetle with a jet engine tie to the roof with a big rope that I scanned from a magazine ages ago because I loved it so much. It's exciting to see that the real thing is out there! ↩Reply

I sure feel like I wasted *my* Stanford PhD... and I love his turbo-moped too! there might be a bit of a problem with scorching your ankles if you get off improperly, but that's a small price to pay for being able to make a harley rider wet his pants after he passed you contemptuously. ↩Reply

Absolutly amazing beettle, its not about Jet Engine, i think there's need passion to create and make the idea into the real beettle...