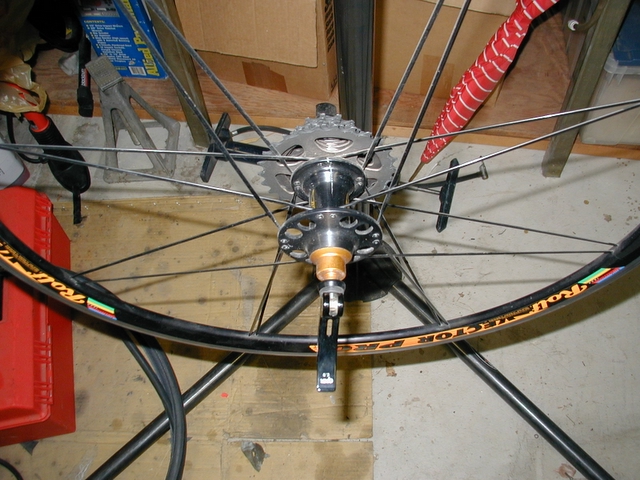 I just had the same wheel fail in the same place; I took it to my trek dealer and they said this is not the first they have seen. They said they have gotten Trek to back the warranty; we will see. Have you had any luck? ↩ Reply

This appears to be a common problem, particularly with the model that included gold annodized caps. If anyone with a cracked hub shell is willing to part it out, I am interested in the aluminum Shimano freehub. Contact mattbo[at]comcast.net, replace [at] with @. ↩ Reply

I can't believe I'm not the only one to have this problem. I just took mine in to the shop. They're going to try to get Trek to replace it, but I'm not holding my breath. I didn't even hit any pot holes. I was just riding down a cap seal road (They pour tar and gravel and let the cars crush the gravel in) and it felt like the tire wen't out of true. I got home and looked at it and sure enough, the hub was broken. It was in almos the same spot as Steve's. I'm not sure I'll get the hub back if Trek replaces the hub, but if I get it back, I'll email you Matt. ↩ Reply

Well, if the hub design is looked at in more detail, the two spokes on either side of the crack, the spokes are pulling the hubs flange apart, coupled with a low spoke count and high spoke tension, the result is almost predictable. Sorry guys, is the two spokes in question were actually crossing at the crack, the force of the spokes tension would be supporting the hub... ↩ Reply

Unortuneately, Trek doesn't have any replacements for the first generation Rolf wheels... I ran across the same issue about a year ago. The ones from the last two versions (with the straight-pull spokes) haven't faired much better, we've had a couple of them break on brand-new bikes hanging on the sales floor One was on the limited production"I wanna be like Lance" madone we brought in to serve as a wall-hanger(since nobody is stupid enough to pay 8g's for it when you can buy the regular model for about half the price!) The biggest issue was the spoke bed of the rim developing stress cracks after a season or so... Acording to the new corporate propaganda, the hubs have been beefed-up, along with the spoke-bed of the rims- time will tell... ↩ Reply

Trek sucks. All the Trek logos on every tube and yet they don't stand by their product. I contacted Rolf about my broken hub and they said no problem just give us the model. When I did they informed me of their association with Trek and it's their product not Rolf. What a crock...with all the free advertisments, logos, on every tube of their bikes , you'd think they could do something for their customers. They suck big time. I had the vector, one of their most expensive wheels and I get nothing. ↩ Reply

I have a set of Vector Pro's and had a rear hub crack when I had a LBS "tune" the rear wheel. I got the same run-around from Trek and Rolf. I had discovered that the Bontrager (Trek again) hub will work with the Rolf Rims, but Trek will not sell just the hub. E-Bay to the rescue! I found a fellow that happened to have a Bontrager hub that matched my rim and got another LBS wheel tech to rebuild my wheel with some new spokes and am very happy again. Unfortunately I found a small crack in the rim close to a spoke. I guess wheels aren't meant to last forever. Just long enough to get out of warranty. I think they call it planned obsolescence. After all, will these companies stay in business if they built bomb proof equipment and we never had to replace them? I am more concerned about safety. I would hate to lose control downhill at 40+ MPH because of a broken hub. ↩ Reply

Thinking of pgradding to RVP's - not sure if I will be able to find some though. ↩ Reply

The original Rolf Sestieres came on my Schwinn Paramount Ti, my lifetime favorite bike to date. They have performed flawlessly, not even a trueing, though I am more football linebacker than bicyclist (6' 225lb). I stress the components by mashing time trials full out. I liked everything about the Rolfs so bought Rolf Prima Vectors for competition and ride the older Sestieres with the Michelin 3 25s for training. Got the silver ones - I'm a retrogrouch and they look so cool. Black rims are ... ugh. ↩ Reply

I´m looking for a wheel front rolf vct red wine for my roadbike, if you have it and whether they can negotiate better in México. mi msn [email protected] ↩ Reply

These wheels have never been damaged in an accident, I am 125lbs, wheels have about 10,000 miles. ↩ Reply

I just had one of these fail while riding, luckily I was near my house. These are, as said above, "Hugi" DT swiss hubs made to order for trek, trek built them and licensed the Rolf paired spoke thing. I actually do not think this started from the spokes, because when I took mine apart there was another crack in the hub shell near the drive side axle bearing on the other side, hidden by the cassette and cassette body. ↩ Reply