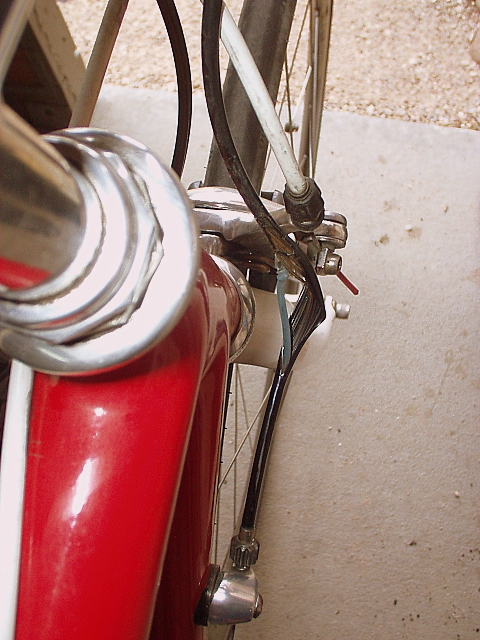 Somehow I knew it had been too long since I last had a major bicycle problem. In fact, it was about 15 months since a broken steering bolt ended my hopes to do the 2005 Delta Century on the recumbent, and 18 months after having multiple issues in the Butterfield Double. Well, the trouble-free streak came to an end today! Here are excerpts from an email I sent out to the Tri-City Tri Club list regarding a ride with TC^2 member Sandi:

Hi all. So today Sandi came over to “ride 6 or so hours” (her idea, NOT MINE, never mind that she had just raced the Boulder 5430 half-Ironman on Sunday). It was somewhat eventful to say the least!

To begin with, at Mile 0.5, before we even had ridden out of my subdivision, she said something like, “Felix, does the road feel bumpy to you? Because I feel a bump in my rear tire…” We then stopped and inspected the rubber on her rear Bontrager. It turned out there were not one but TWO bumps in the tire. See
this photo of one of the “bumps”. She had raced on that

Fortunately, I had a spare wheel/tire at home, so we put that on and off we went. At Mile 20, however, I noticed something strange… I was shifting my Ergopower levers, but for some reason the rear derailleur remained in the highest gear. I was looking back at the rear derailleur as I shifted and was really perplexed as to why nothing was happening. Then I looked out in front and saw this

So for the rest of the ride my gear combinations were 52X13, 42X13, and a “low” gear of 32X13. [Note: my actual high gear is a 12-tooth cog, but after this problem occurred I took out my multi-tool and adjusted the “high-limit” adjustment screw on the rear derailleur to lock it in the 13…] This would have been fine except we still had to go up a few more 17% grades, not to mention 62 miles to go…

Anyhow, it was a fun ride, with some very picturesque scenery and views by the Horsetooth Mountains and Reservoir, steep climbs, and ample cloud cover that kept temperatures comfortable. Sandi was sure it was going to rain but in the Fort Collins tradition it drizzled (well, three rain drops) for about ten seconds before the sun came out.

So who’s coming out here next?

Postscript: I had some spare cable housing at home, so the next day I quickly swapped it out. Difficult luck, easy fix.

Sandi had locked the rear wheel (twice!) for an extended time and wore her rear tire down to the fabric. She would do well to study braking technique in order to get shorter stops and avoid skidding, see my Bicycling Street Smarts on my Web site. ↩ Reply