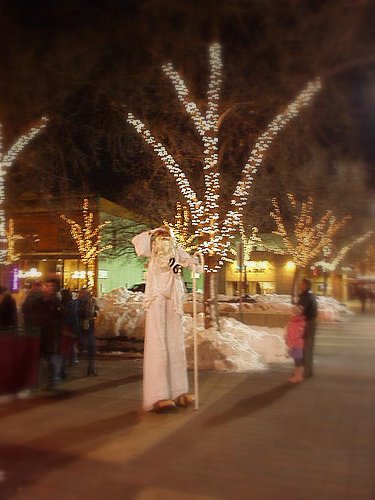 It was only a few minutes after we had just crawled into an air-blown dome tent when a Discovery Science Center Planetarium man started quizzing us on the names of constellations projected onto the tent’s ceiling.

“Ursa Major and Ursa Minor!” exclaimed one know-it-all kid who, apparently, was correct.

“That one’s Orion,” said a girl behind me. Soon I was hearing other seven-year-olds yelling out names such as Taurus and Subaru that were familiar to me as cars but not as stars.

“Hmmm,” I observed to my friend Josh sitting next to me, “these kids are a lot smarter than me…”

Indeed, on this last day of 2006, I was being both educated and entertained, courtesy of downtown Fort Collins. While in previous years I have rung in the New Year in different ways—say, setting off sparklers and smoke bombs with Dan in Durham or downing half-a-dozen beers with Peggy in San Diego—never before have I been exposed to so many different local gigs in one night all while keeping out of any miscellaneous mischief.

First Night is a twelve-year annual tradition featuring over 40 activities and live performances at 17 close-by venues. By purchasing (and wearing) a $10 button, one could go to any and all of them, though from a practical standpoint, one could attend six or seven of them in a span of five or so hours.

So in addition to the Planetarium interactive presentation, Josh, Ryan and I attended a hilarious Clown Box Improv gig and a 30-minute Opera Fort Collins demo. I also went to see Rosann Winn who was singing and strumming her guitar at Walrus Ice Cream and another culture-ish/theatre skit entitled “An Evening of Merry Madness” featuring sexagenarians babbling about ex-spouses and forgetfulness at the Bas Bleu Theatre. (The arts is big in Fort Collins, having more theatre productions than Colorado Springs and Boulder combined.)

Probably the highlight of the evening for me, though, was attending a performance by a dude clad in white leather who sported long sideburns and sang hits such as “Jailhouse Rock.” Yes—Elvis!

Or rather, Charles King, an Elvis impersonator. From his website:

Charles King has spent over 30 STRAIGHT YEARS on stage from musical comedy to drama, and celebrity impersonations! He brings this vast experience to every performance, creating a nearly flawless recreation of the voice, the moves, the manner, and the look of Elvis Presley! As the host of Italy’s most-watched television show commented, “He’s so close to Elvis in sound and looks that it’s actually scary!”

In reality, let me assure you this guy was anything but scary. Well, maybe except for the moment he leaped six inches in front of the face of an unsuspecting woman in the middle of one of his songs, prompting her to scream. I’m not even sure if his “flawless recreation of the voice and look” would fool many Elvis aficionados either unless they were a little hard of hearing and had the propensity to shout upon seeing any Joe Schmoe with two-inch sideburns, “Look! It’s The King!”

So never mind the authenticity. In any case, his guy was a riot. Let me briefly explain his setup:

First off, it’s not like this guy has his own band or stage crew. Actually, I think he did have one guy on hand to help out with what was basically a half-step up from the latest Wal-Mart karaoke special, except midway through the show I think this guy went to the bathroom, or dinner, or anywhere where he wouldn’t have to watch some guy in neck-to-toe leather shake his bootie.

So between songs—actually, sometimes in the middle of songs—The King (er, Charles King) would jump off of the eight-foot stage over to his sing-along machine to turn down the volume a tad, or begin the next song, etc. His in-the-midst transitions between being Elvis and a DJ were not always seamless, especially when part of his wardrobe would get caught on, say, speaker wires.

“My chains keep falling off,” he said, pointing to the chains on the stage that were formerly part of his white pants.

Then there was the matters of his moves. I really had to concentrate hard on NOT LAUGHING as he flailed his arms around like he was trying to ward off 100 mosquitoes, doing a high-kick like he was some sort of Jackie Chan character, or constantly have to pull up his wrap-around fabric belt which kept slipping down to his thighs.

At least his singing was all right—never mind that I had hardly heard of any of the songs he sang even though I am something of an oldies (60s music) buff who at one time even owned a “Best of Elvis” CD. (Before you start laughing, let me assure you I did not buy that CD. In fact, it was a CD that someone in college gave me because she decided she did not want it!)

When he was done, I was still smiling upon hearing what kids had to say to their parents after getting out of their seats:

The real Elvis is probably rolling in his grave right now or laughing from up above somewhere around Ursa Major, but ah well, it’s all in good fun. Happy new year!

More photos are here, including three of Elvis.

January 4, 2007: This article was printed this week in NextNC—a Northern CO weekly publication—in a highly edited form. It is here (PDF, 906 kB).