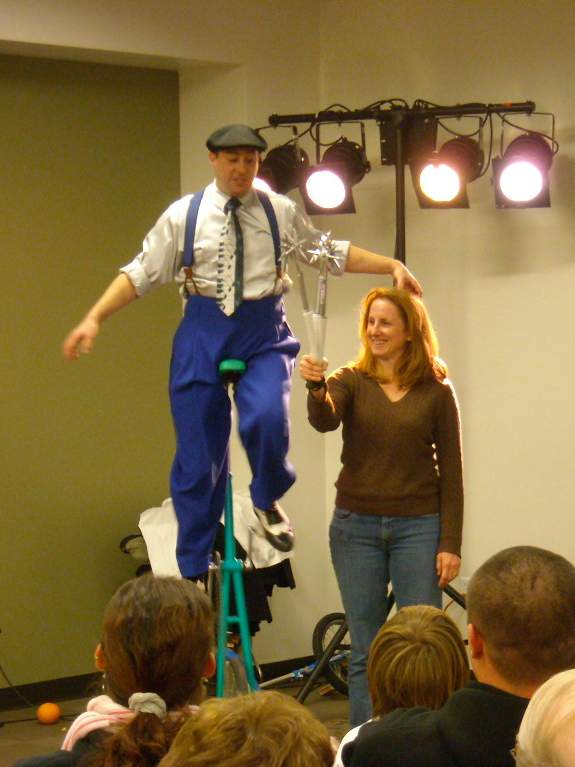 After celebrating the last two New Years with my buddy Bandy in California, I made a point of returning to my hometown of Fort Collins to kick off 2010 with Tori. While hanging out with my BFF pretty much guaranteed that we would not be belly dancing or getting drunker than Charlie Sheen, we looked forward in particular to the city’s annual First Night Fort Collins celebration. Even if no Elvis impersonators were scheduled to perform this year.

There was, however, a juggling unicyclist, a balancing act involving hoops and balls of the type you might see in a Suzanne Sommers infomercial, and a bunch of men tooting brass instruments to tell the story of Peter and the Wolf.

We also went to a couple of educational shows where I noted to Tori, “we seem to be the oldest people here” while being encircled by toddlers and other school kids who were not too cool to be doing something other than actually learning on this night. These programs included an interactive exhibit about the constellations in the sky and a science demonstration that explained concepts ranging from particle pushing to distribution of forces.

After those two programs, we met up with Rob to watch a one-woman melodrama in the Bas Bleu Theatre before watching the juggler, balancer, and brass-playing band.

Concluding the night was a two-minute fireworks display over Old Town put on by the City of Fort Collins. While it would never rival firecrackers at Times Square or even fireworks over Fort Collins’ City Park on the Fourth of July, it did effectively punctuate the New Year with a bang. A short video of the lights-in-the-sky show is below.