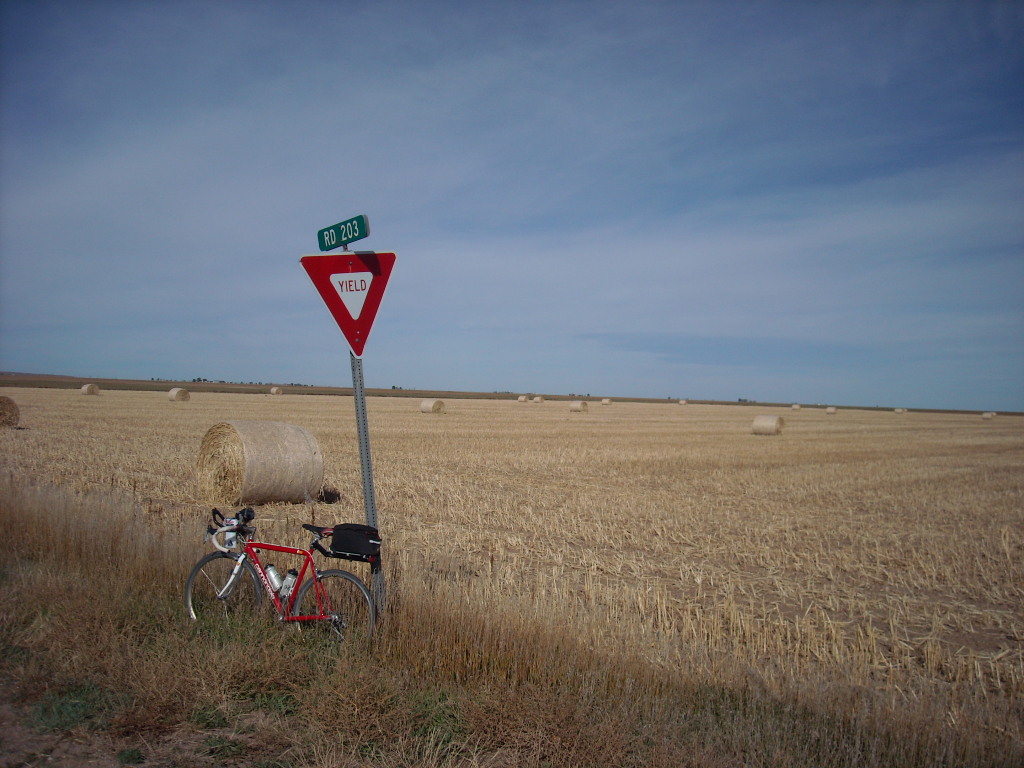 “The distance from my house to the Nebraska border is exactly 100 miles,” a Fort Collinser named Mike told me at the Jorge Torres presentation the other day. “If you go out-and-back, it would be 200…”

Nebraska? It sounded intriguing for my final long ride of the year, designed to be about 200 miles so as to continue a double century streak going back to 1996.

As it turned out, it turned out to be a good final long ride for 2008, as it was easy to navigate even with limited daylight (and only 2 stop lights, both in Ault) and—more importantly for my not-in-best-shape legs which have only biked six or so times since the summer’s Tour Divide—FLAT.

Below is the route—or at least the intended one. More on this in a little bit.

I started riding at 4:30 a.m., expecting a low temperature of about 42 degrees. It was probably that warm (cold) in Fort Collins, but by the time I got to Ault 20 miles east, it was 32 degrees. My gloves were not cut out for that and I actually had to stop in a park in Ault to sit on my hands (literally) in order to warm them up and regain some feeling in them.

Another early morning issue I had was on Highway 14. It had a nice and wide shoulder and not too much east-bound traffic on a Saturday morning, but it also had rumble strips that were hard to see with my low-powered lights. Ditto for areas with sand and hardened dirt mounds that resembled flattened cow dung patties.

Fortunately, by 8:00 a.m. the sun was well above the horizon, and the ambient air started to warm up a bit. And the rest of the roads (CR77, Carpenter Rd., and the I-80 Frontage Rd.) might have had sketchy shoulders but almost no traffic.

Unfortunately, my cycling fitness is a bit lower than a few months ago from hardly riding, so I was not making great time. That, coupled with the reduced daylight hours, prompted me to turn around in Wyoming about 3.5 miles from the Nebraska border. So I actually ended up only seeing Nebraska, but not riding into Nebraska. I really did not want to have to ride the last miles on Highway 14 back to Fort Collins in the dark—as I knew there would be a lot more traffic by then and those rumble strips would be hard to see—and I was going to cut it really close as it was, especially since I had to make a quick food and water resupply stop at a convenience store off I-80.

Turns out that turning around a few miles prematurely was a good call—especially since I got a flat tire (staple puncture) on Highway 14 just four miles from Fort Collins. By then, it was already twilight, and by the time I had changed the flat tire (10 minutes), the sun had already dipped below the mountains. Worse, that stretch on Highway 14 was part of a construction zone, with lots of deep sand on the shoulder that was hard to see. By the time I got off Highway 14 and safely onto the I-25 Frontage Rd., it was dark except for street lights and the stars.

All in all, it was a good ride, about as leisurely as a 200-miler (or in my case, a 195-miler, which still counts as a double century in my book) can get. Thanks for the route suggestion, Mike!

Glad the route worked out for you on a nice weekend! Also good to finally meet you at Runner's Roost. Like I said, it's funny we hadn't met before: I was at Veloswap on Saturday and the Obama rally on Sunday as well!